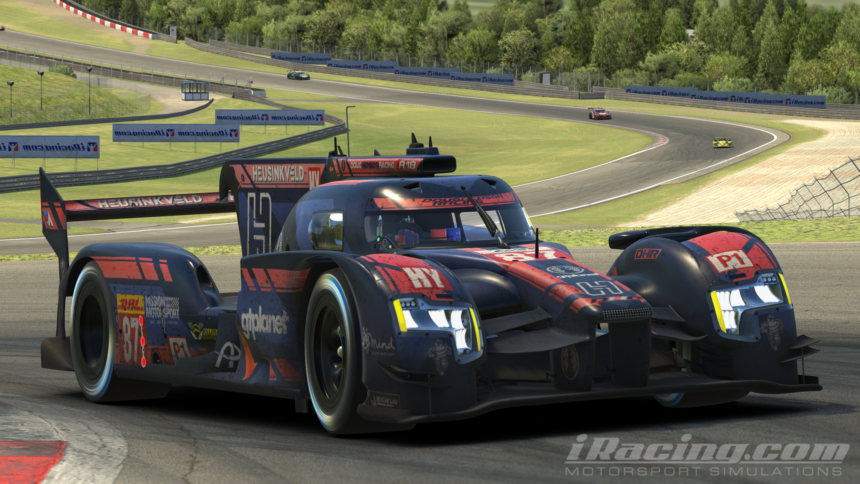 The iRacing Endurance Le Mans Series – or to put it another way, my favourite online racing series in sim racing at present. With its 6 hour races and multiclass format, including my beloved hybrid LMP1 class, it was always going to win me over.

Whilst writing about the iELMS is new to me, racing in it is not. Both myself and Stephen Bailey have competed in the series since it began in March. Bailey is vastly experienced, with over a decade of multiclass sim racing. Together we’ve won races in other sims and series. We even won the second season of the iELMS in LMP1 earlier this year.

In LMP1, the choice was either the Audi R18 or the Porsche 919. Despite our love for the R18, the 919 was the sensible choice. At this stage, you had to choose the 919 to be competitive. With its superior hybrid storage and regeneration, it was the better race car. Naturally, we opted for the R18.

Why? We like an underdog, we prefer the way it drives, it has a faster pit stop and the hybrid sound is pretty damn cool! There’s something about the underdog that adds emotion to the story. So much in racing is about how it makes you feel, and doing it our way adds that element to it.

Thankfully for us, the Nurburgring 6 Hours gave us a chance to come back at a track that works a little better for the Audi. Despite that, the best we could realistically target was fourth. With the top three teams using the 919 and with some of the fastest LMP1 drivers in iRacing at their disposal, anything more than fourth would be an incredible achievement.

Starting fifth wasn’t ideal given the race pace in the car. To maximise our chances of exceeding our target, it was critical to not lose chunks of time early on behind a slower car. An early Danny Ric-style dive at turn one from Bailey soon put us back on track.

The early part of these races is always frenetic. The first time through the GTE class is terrifying. The second time through can be even worse. By now, the LMP2 class is lapping GTE for the first time. Add in the LMP1 class and you end up with something that looks like the M25! For us, just getting through packs like that is a relief.

The first pit stop would prove critical for the rest of the race. Our usual plan involves double stinting the tyres to save time. This time, it would prove to be the wrong choice. The previously third-placed 919 took new tyres and, despite falling behind in the pit stop, would soon be back on us. All it took was a moment of confusion in traffic and third place was gone.

From there the time loss only got worse. The lack of agility in the car on the old tyres was bad enough, but the traffic was especially painful. Without the ability to dive or drive around the outside in places, we lost nearly 50 seconds to the race leaders. We would take tyres at every stop from now on.

With me now in the car, I set about trying to keep the gap to third at a manageable distance. Having a licence to push the tyres as much as possible helped. This is where I feel in my element; there was nothing to lose and I was armed with a fast car that gave me the confidence to slice through the traffic. I wish there was more to say about my first double stint, but it flew by with very little drama.

With Bailey strapped back in, he’d clearly decided he was going after third place. Usually, he plays it quite safe in traffic – that would not be the case this stint. A series of 1:39’s and clinical moves in traffic saw the gap to third shrink to just a couple of seconds by the end of his stint. With the gap coming down rapidly, our opponents felt the need to try and double stint tyres for the first time.

A couple of laps later, it was time to get back in the saddle. With fresh tyres and a Porsche on old tyres, I was chomping at the bit. This is racing to me. Different strategies, taking risks and pushing as hard as you dare to make things happen.

The Porsche was clearly struggling. I was consistently taking time out of them. As a result of the constant pressure, they had to come in early and change tyres. Despite putting their faster driver in for the last 40 minutes, it was too little, too late. With only a short fuel stop to come and no need to change tyres, third place was ours.

To get third after 6 hours of hard-fought racing was a real shot in the arm. When you go out and really earn a result like this, you feel like you could walk on water – not that I advise trying! Sharing this with a friend and the chat made it even more special.

It was an extraordinary night. With this being the first in a series about our time in the iELMS, I can’t wait to bring you more thrills and spills from our endurance racing escapades.

Gran Turismo 7 35 Oct 28 by Andrew Evans
Gran Turismo 7 is once again being pushed to the forefront of PlayStation 5 promotional materials, this time featuring in the console’s official launch trailer. Sony released this trailer earlier…

Gran Turismo Sport 555 Oct 26 by Andrew Evans
A fresh week means a fresh set of GT Sport Daily Races, and the line-up for the next seven days is a little curious. You’ve got two events with full-on…