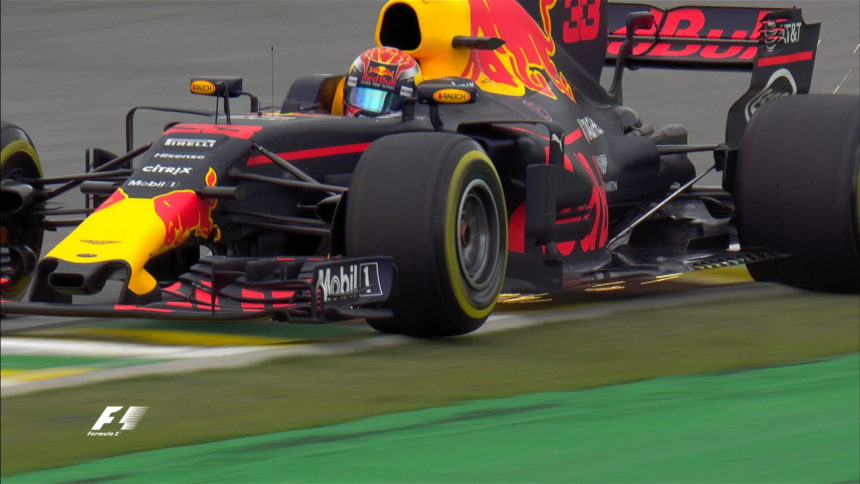 The penultimate race of the season had many stories waiting to be told. How would Felipe Massa perform in his final race in Brazil? How far up the field could Hamilton and Ricciardo get? Could Bottas hold off Vettel?

We have 20 of the best drivers in the world in Formula One but when everybody is piling into a tight chicane at the start of the race, fireworks are almost inevitable. Exiting the Senna S chicane, Daniel Ricciardo was hit by Stoffel Vandoorne who had been squeezed by the Haas of Kevin Magnussen. Ricciardo survived the incident but both Vandoorne and Magnussen retired with critical damage.

Later on in the first lap, the other Haas of Romain Grosjean was involved in a crash with the Force India of Esteban Ocon. Grosjean oversteered and collided with Ocon, causing both drivers to spin off the track. Ocon’s damage was terminal, thus putting an end to his streak of 27-consecutive race finishes for a rookie. Grosjean was slapped with a 10-second time penalty for his troubles.

Lewis Hamilton started from pit lane after crashing out in qualifying yesterday but was up to P14 after the first lap calamities and subsequent Safety Car period. The start played into his hands nicely — by the ninth lap, Lewis was into the points. By lap 29, he was leading the race after the front runners pitted for fresh rubber.

Daniel Ricciardo was also scything his way through the field after the crash in turn two at the start. By lap 15 he too was into the points.

There was a slight scare for the race leader Sebastian Vettel as Mercedes brought second place man Valtteri Bottas into the pits on lap 27, trying the undercut strategy. Ferrari brought Vettel into the pits on the next lap to cover off Bottas. The race was on out of the pits with Vettel only just beating Bottas onto the racetrack to keep the net lead of the race.

By the halfway point, the strategy calculations had begun. Hamilton was leading the race but in a net fifth place. His plan was to put the super soft tires on and run to the end of the race, taking advantage of the extra pace the softer rubber would give him after starting the race on the soft tires. The top five were all now on the soft rubber and didn’t have to pit again. The time difference between the super soft and soft compounds was only a mere two tenths of a second.

On lap 43 Lewis Hamilton pitted from the lead, coming back out in fifth place. It was hammertime for Lewis as he planned to go from the pit lane to the podium on his fresh super soft rubber.

Onto lap 59 and Hamilton passed the struggling Max Verstappen for fourth place. Lewis’ next victim was the Ferrari of Kimi Raikkonen in that precious final podium position.

By the final five laps of the race, Hamilton had caught Raikkonen but eventually ran out of grip on his tires and had to settle for fourth place. Only two times before in Formula One has a driver started in the pit lane and managed a podium. Today we didn’t see a third. However, Lewis Hamilton did take home driver of the day honors.

Raikkonen held onto the podium, Bottas finished second but the winner of the race was the supreme Sebastian Vettel. After passing Bottas into turn one for the lead, Vettel never looked back for his third victory at Interlagos and 47th overall. It may be surprising to some that the last time Sebastian Vettel won a race was July. He may have lost the title but he won this race in very convincing fashion. Today was the first time Ferrari has won in Brazil since Felipe Massa’s famous victory in 2008.

In his last ever race in Brazil, Massa himself put on a show. The hometown boy held off Fernando Alonso and Sergio Perez for a spectacular seventh place finish. It was much better than the dress rehearsal we had last year when the Brazilian ace retired from the race. Massa bowed out in front of his home fans and got to see the checkered flag in the process.

Another lap record was rewritten when Max Verstappen set a 1:11.044 on lap 65, beating Juan Pablo Montoya’s previous lap record by three tenths of a second. These 2017 cars are monsters but we’re being told that they’ll be even faster next year.

There’s only one race to go then until we can properly start talking about next year. Abu Dhabi is the final race of the season. Can Hamilton finally win a race after he’s won a championship in the same year? The battle continues on in the midfield and Bottas is still looking to somehow overhaul Vettel for second place in the Drivers’ Championship. 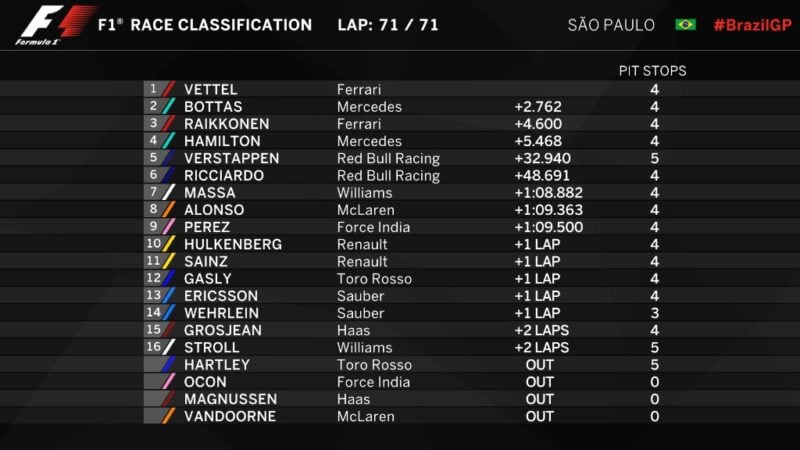 F1 2017 Season
98 Comments Discuss this post in our forums...
Test Your Badge Knowledge With Our Car Logo Quiz