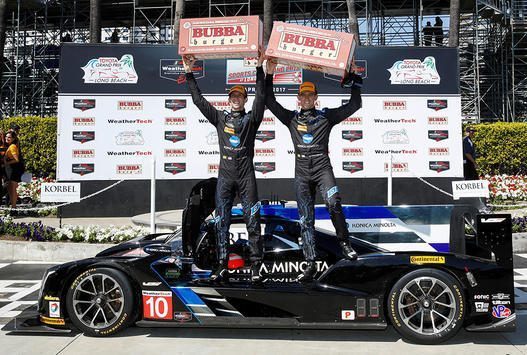 It was a busy time for racing last weekend, with the second round of Formula One as well as the kick-off of the 2017 Super GT season. Not to be outdone, the IMSA Weathertech SportsCar Championship had arguably the most dramatic race of the weekend.

The pole sitter Cadillac of Ricky and Jordan Taylor continued to hold the lead once the green lights went off, with the Mazda RT24-P driven by Tristan Nunez pulling a move on Christian Fittipaldi’s Action Express Racing Cadillac preventing him from turning in and thus allowing the Mazda to slot into second. Followed in fourth place was the second AXR Cadillac, piloted by Eric Curran.

Behind them, chaos struck the Ferrari 488 of Toni Vilander as whilst it grabbed the GTLM class lead, it spun Ed Brown of the ESM Nissan around prompting a yellow flag. This wasn’t before Tom Long slipped the second Mazda into ninth, past Goikhberg’s JDC-Miller’s Oreca, who would then go on to lose it in Turn 9 on the restart.

Vilander’s collision didn’t only result in a retired Ferrari, but left the #66 Ford GT of Joey Hand heavily delayed, as well as the GTLM pole-sitting #3 Corvette of veteran racer Jan Magnussen. This then allowed the #912 Porsche of Laurens Vanthoor to slot into the lead of the race.

Following the second yellow flag on lap 11 for large debris obstructing the racing line, Long made it past Curran to put the Mazda within the top five.

Disaster once again occurred at Long Beach on lap 21. Fittipaldi misjudged Jeannette’s GTD Mercedes-AMG, sending the #5 Cadillac into the tyre wall, leaving Barbosa three laps down once he was swapped in.

Due to the sudden and extensive amounts of yellows, along with varying pitstop strategies, the GT classes had been leading overall, leaving the Prototypes to thread through traffic to make back positions. Cameron then bounced off the apex wall on Turn 8, leaving the #31 AXR Cadillac on the outside wall, which would finish off a disastrous weekend for the team.

The long yellow caused by this negated the need for a final pitstop, giving the chance for an outright sprint to the finish, with Dalziel desperately needing to hold off the #10 Cadillac to end the marque’s dominance. At a rate of one second per lap, Taylor slowly closed the gap until a cluster of crashed GTD struck Dalziel’s push, allowing Taylor to draft past the Mazda on the beginning of lap 58.

The Mazda couldn’t thwart the Cadillac, allowing it to go on to a third win in a row this season. Bomarito trailed in third nine seconds down, then followed by Simpson in the JDC-Miller Oreca and Tom Kimber-Smith in the PR1/Mathiasen Ligier in fourth and fifth further down. 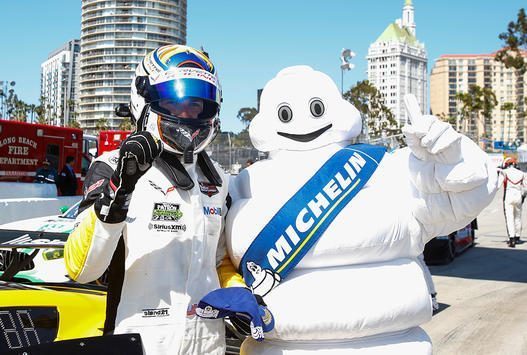 Thanks to pit strategy, Martin Tomczyk was able to set the #24 BMW Team RLL into first place, with Antonia Garcia’s #3 Corvette and the #67 Ford of Briscoe in hot pursuit. This pointed to a definite carry out by Tomczyk to take out top honours, but those hopes were confusingly halted with the #24 suddenly slowing on lap 53. This allowed the closely pursuing Corvette of Garcia to swipe the lead, with Briscoe being caught out by the sudden slowing of the BMW to give Tommy Milner second.

It looked good for a Corvette 1-2 finish, until Garcia struck the same cluster of GTD cars that dashed Dalziel’s hopes in the Prototypes. Not being able to find a way through, Milner, Briscoe, Estre and Sims were all able to tip toe through and clutch the top four, leaving Garcia feeling needlessly robbed of an almost definite podium.

The Mercedes-AMG of Jeannette — which had an altercation with a Prototype earlier in the race — was able to take the win of the bewildered GTD class. Both top honours were taken out by the German marque, somewhat reminiscent of its form at Misano in the Blancpain series, with Jeroen Bleekemolen and Ben Keating trailing in second for Riley Motorsports.

Following them was the Scuderia Corsa Ferrari 488 of Alessandro Balzan and Christina Nielsen, with Jorg Bergmeister and Patrick Lindsey’s Park Place Motorsports Porsche further down the road in fourth.

Next month, the series takes on The Circuit of the Americas for the Advance Auto Parts Sportscar Showdown, held from May 4–6. 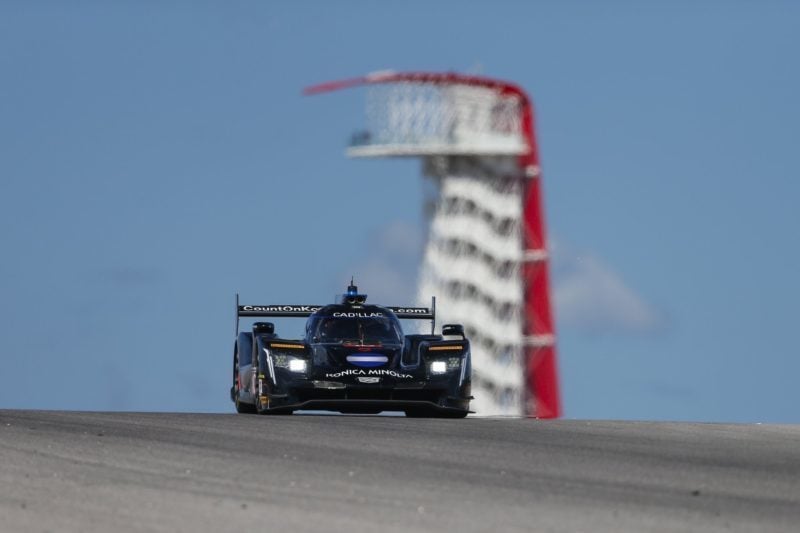 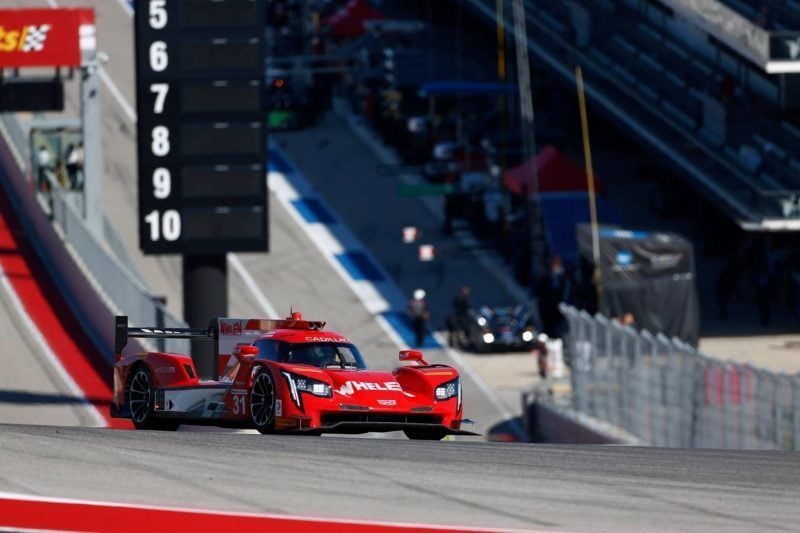 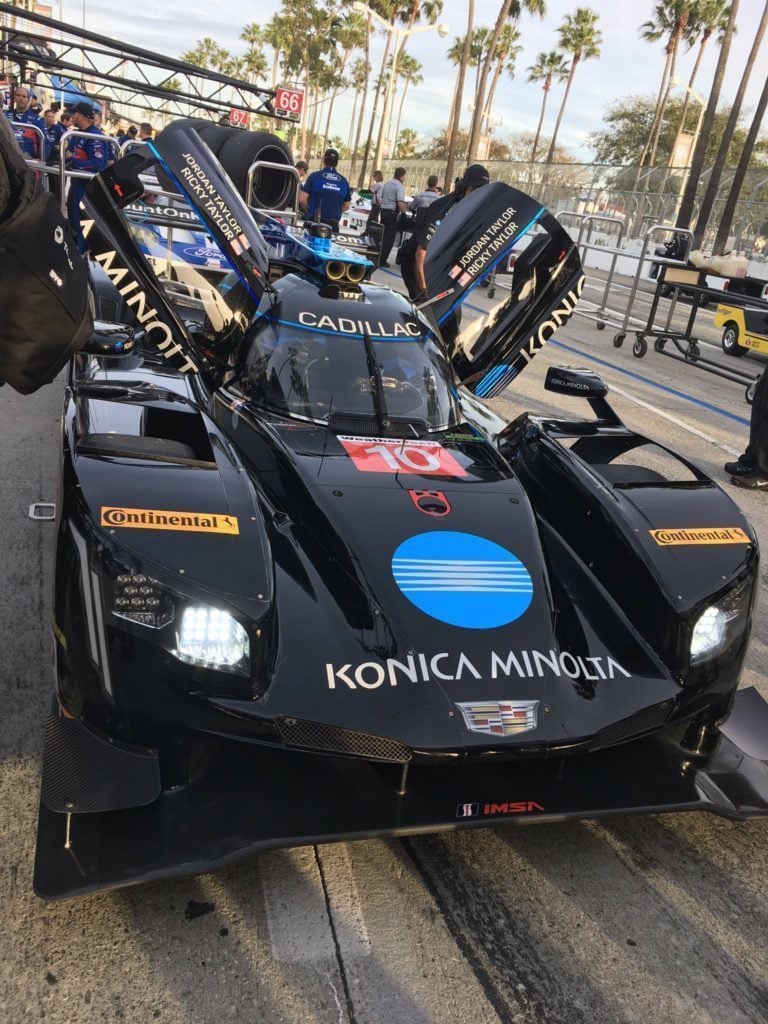