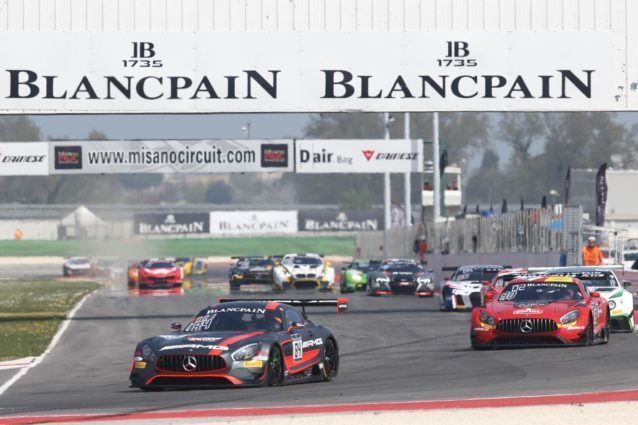 This last weekend kicked things off for the 2017 installment of the Blancpain GT Series, with the Sprint Cup season opener taking place at Misano World Circuit in Italy.

It was all smiles for HTP Motorsport at the Italian circuit, after both its campaigning #84 and #86 Mercedes-AMG entrants grabbed podium honors, coming first and third respectively. Bentley seized the opportunity to disrupt a full Mercedes-AMG podium sweep, with the Bentley Boys — as Vincent Abril and Steven Kane are known — defending hard to finish 23 seconds down from the winning #84 car.

Rounding off the AMG-dominated top five was the #88 AKKA ASP car, driven by Felix Serralles and Daniel Juncadella, placing fourth. Topping the Audis was the #26 R8 LMS of Romain Monti and Christopher Haase with a fifth place finish, with the two ROWE Racing BMW M6 sisters falling back a further 12 and 15 seconds respectively.

Misfortune struck the defending champion pair of Enzo Ide and Christopher Mies in the factory WRT Audi effort, finishing outside of the top ten after a spin earlier in the race. Adding insult to injury, the pair’s sister car succumbed to mechanical troubles before the race ended.

Continuing off HTP Motorsport’s success, the team saw another win with the #85 taking top hours within the Silver Cup, trailed by the #42 McLaren 650S GT3 of Nick Leventis and Lewis Williamson.

The Pro-Am class was taken out by the Ferraris of Rinaldi Racing and Kessel Racing coming first and second, with the #333 Rinaldi Racing pair of Alexander Mattschull and Daniel Keilwitz taking home the first place trophy. AKKA ASP subsided the Mercedes-AMG domination for the opener with the #89 car grabbing third.

Later this month sees the return of the long-form Blancpain GT Endurance Series, with the season opener taking place at Monza on April 23.

Kyle Patrick · Apr 4, 2017· Comments
After nearly a month’s break, the Blancpain GT Series has restarted in a big way. This weekend will play host to the twice-around-the-clock race at Spa-Francorchamps.

Matej · Apr 4, 2017· Comments
After over a month’s sabbatical, the Blancpain Endurance Series got back on track at Circuit Paul Ricard. It was a hard-fought battle from beginning to end at the French circuit. In the end, one manufacturer saw itself back on the top step for the first time in two years.

Matej · Apr 4, 2017· Comments
The exciting sprint race at Zolder took place this weekend, leaving the top podium spot to Markus Winkelhock and Will Stevens from Audi team WRT (No. 2). This is Audi’s first victory in the Blancpain GT series this year.

Matej · Apr 4, 2017· Comments
The third race of the 2017 Blancpain GT Sprint Series Cup will get underway on Sunday at the Belgian circuit of Zolder.

Andrew Evans · Apr 4, 2017· Comments
In racing, things often come down to fine margins, and there’s few finer than at Silverstone this weekend.

Josh Steele · Apr 4, 2017· Comments
With the Blancpain GT Series sister championship, the Sprint Series, having its season opener earlier this month, it was time for the more established GT Endurance Series to also take on Italy for its start to the 2017 season — this time at Monza.

Matthew Simmons Back with Nismo for 2017 Blancpain GT Series

Matej · Apr 4, 2017· Comments
International 2015 GT Academy winner Matthew Simmons will be joining forces with Nismo in another season of the Blancpain GT Series. Once again operating under the RJN Motorsports banner, Matthew will compete in the Pro Class using the trusty Nissan GT-R (#22). Racing colleagues Matt Parry and Struan Moore will be sharing the driving duties, with the team target being podium placements.

Lucas Ordóñez Gears Up For The 2017 Blancpain GT Series

Brendan Rorrison · Apr 4, 2017· Comments
Lucas Ordóñez is set to return and race in the Blancpain GT Series, following an announcement on the official GT website. The Spaniard will drive for Team RJN Nissan, getting the chance to reprise his driver’s position to pilot the GT-R NISMO GT3 against harsh competition from the world’s leading supercar manufacturers.