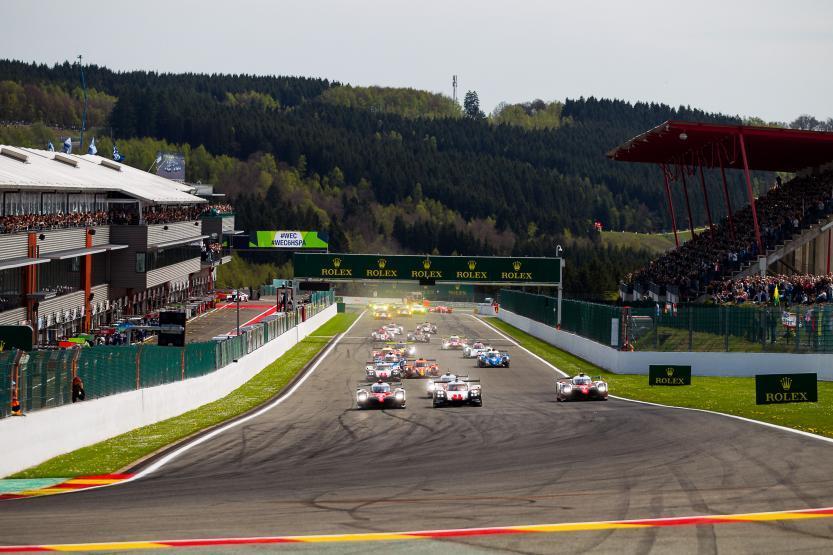 Toyota took a magnificent 1-2 victory at the 2017 6 Hours of Spa with the No. 8 car of Kazuki Nakajima, Anthony Davidson and Sebastien Buemi taking the checkered flag and their second victory in a row. It was Toyota’s first victory at Spa in two years.

The sister No. 7 car led most of the race but two separate yellow flag periods worked out in favor of the No. 8 machine. The number eight is a lucky number in Japan and the superstition appeared to come to fruition for the Toyota TS050 Hybrid of Nakajima, Davidson and Buemi.

The No. 7 Toyota, driven at the time by Mike Conway, attacked early on and within a dozen laps had caught and passed its sister Toyota car. Conway also dispatched the No. 1 Porsche to take the lead of the race. The No. 8 Toyota also got past the Porsche later on, much to the chagrin of former F1 driver and WEC champion with Porsche Mark Webber.

Germany didn’t give up however, and as dusk approached, the No. 2 Porsche got by the No. 7 Toyota to take second place. Porsche versus Toyota is nothing new in the World Endurance Championship and it was Germany versus Japan for much of the race around the classic Belgian circuit.

There was late drama as the No. 2 Porsche clipped one of the Alpine LMP2 cars heading into the Bus Stop chicane, forcing the Porsche to pit for a nose change. This, coupled with a slow puncture earlier in the day capped off an unfortunate race for the German outfit.

Porsche’s pain was Toyota’s gain as it had very few problems throughout the six hour event. The No. 8 Toyota crossed the line marginally ahead of the sister No. 7 car with less than two seconds covering both cars in the LMP1 class.

In the LMP2 class it was G Drive who took the spoils as the No. 26 car led from pole for most of the race. Ex-Formula One driver Bruno Senna, driving for Vaillante Rebellion, found a way past early on, but it was a mere blip on G Drive’s day. There was woe for Rebellion heading into the final hour of the race. A problem with a timing beacon caused one of the cars to head into the pits. This elevated the No. 38 Jackie Chan DC Racing car into a podium position.

The Prancing Horse galloped to victory in LMGTE-Pro as it followed in Toyota’s footsteps and took a deserved 1-2 finish. The No. 51 Ferrari driven by James Calado, Alessandro Pier Guidi and Lucas Di Grassi beat out the No. 71 Ferrari piloted by Davide Rigon, Sam Bird and Miguel Molina.

There was early action as the two Ford GTs battled it out on the Kemmel Straight in a fight for second position. As they fought among themselves, the No. 51 Ferrari sneaked by into second place. This set the precedent for most of the rest of the race.

Ford didn’t let Ferrari walk away with it as the Blue Oval did muster up some offense. The No. 66 Chip Gannassi Racing Ford GT bravely went door-to-door with the No. 512 AF Corse Ferrari 488 GTE through the unforgiving Eau Rouge corner. Both cars came out unscathed as the drivers showed off their immense skills behind the wheel.

Later on in the lap, the No. 71 Ferrari nudged the No. 51 Ferrari off the race track through Les Combes to take the lead of the class, thus allowing the #66 Ford to come back through into second place. One of the number one rules in motor racing is to not take out your team mate. While this rule wasn’t broken, the light contact between the two red cars was a heart-in-mouth moment for both the team and its fans.

Normal service was later resumed as the Ferraris raced around in 1-2 formation for the rest of the race. The inter-team battle was as a close one as the cars ran nose-to-tail and door-to-door for long periods. At this point, the AF Corse team had the opportunity to implement team orders as a means to bringing both cars home in one piece. However, there was no such transmission over the radio and the drivers were free to race.

The LMGT-AM class was led pretty much from the beginning of the race to the end. The No. 98 Aston Martin GTE driven by Paul Dalla Lana, Pedro Lamy and Mathias Lauda dominated from pole to flag.

Toyota, Ferrari and Aston Martin all carry vital momentum heading into the big one. The next race on the WEC calendar is the illustrious 24 Hours of Le Mans. Porsche’s dominance at the event could be under threat after Toyota put on a great show in Spa.

The German marque owns eighteen victories at the Circuit de la Sarthe — could Porsche make it nineteen next month? Toyota will be on the full offensive to try and put a stop to that.

The 24 Hours of Le Mans takes place between June 17 and 18. Keep it locked to GTPlanet for all of the post-qualifying and post-race fall out!

Motorsports 111 Aug 2 by Andrew Evans
The 2018 GT Sport world champion Igor Fraga has had another weekend to forget in FIA Formula 3, after his car broke down during the sprint race at Silverstone. Perhaps…

Motorsports 111 Jul 19 by Andrew Evans
A third-lap incident in the FIA Formula 3 race at the Hungaroring robbed GT Sport world champion Igor Fraga of his first chance to score points this season. After two…