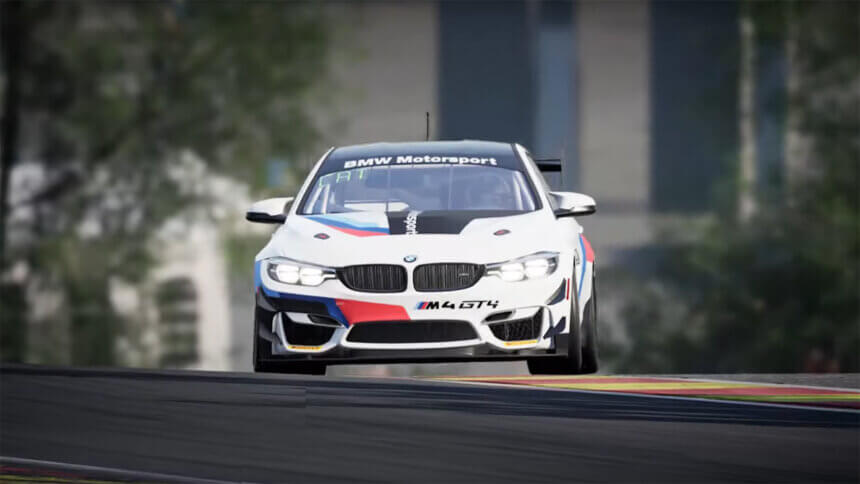 It’s been a busy week for Assetto Corsa Competizione fans. First, 505 Games released the console version of the game — which we rather enjoyed, despite a few gripes — and now there’s a DLC pack on its way.

Officially called the GT4 Pack DLC, the add-on brings a new dimension to the existing game. Whereas ACC’s base offering is exclusively GT3 cars from the GT World Challenge and Intercontinental GT Challenge, the GT4 pack brings exactly what it says: GT4 cars.

There’ll be 11 more cars in total, which actually represents an almost 50% increase in the number of vehicles in the game. Though the official trailer focuses on the BMW M4 GT4, there’s another ten that the clip refers to very rapidly:

In case they all scrolled by a little quickly for you, the new cars are:

Unsurprisingly that list covers the entire grid for the GT4 category of the 2019 Blancpain GT World Challenge Europe — the former name of the GT World Challenge — and we can expect the full range of 30+ different liveries, teams and drivers. The series took place on the same circuits as the GTWC, which means there’ll be no further tracks in the pack, though the trailer doesn’t suggest that there would be.

PC players can expect the pack to arrive during July 2020, while console players will have to wait just a little bit longer until autumn. There’s no word yet on pricing for the GT4 Pack DLC, but we expect Kunos to reveal that — and more of the cars — in due course.

Assetto Corsa Competizione DLC
164 Comments Discuss this post in our forums...
Test Your Badge Knowledge With Our Car Logo Quiz