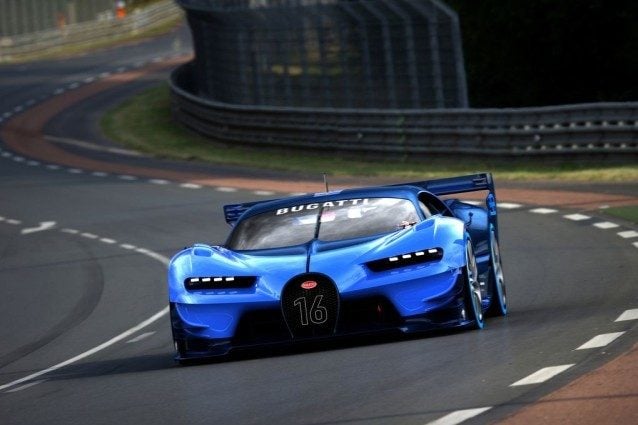 The Frankfurt motor show may only open to the public on September 17th, but Bugatti has taken advantage of the press days beforehand to reveal a life-sized model of the virtual Vision GT car it has been teasing us with for weeks.

Further information on the car itself is still somewhat thin on the ground. The feature presentation was somewhat shy on power figures, for instance, but it was revealed that the Bugatti Vision GT uses the famous 8.0 W16 powerplant and will reach a theoretical 250mph on the straights of the Circuit de La Sarthe.

More interestingly still, the mock-up has been shown moving under its own power – setting it apart from some of the other full-sized VGT replicas we’ve seen, unveiled as static models at previous motoring events. Promisingly, the real thing also has a full and somewhat lavish cockpit, even sporting a plaque signed by Kazunori Yamauchi.

While we’re still waiting for the car to debut in the game however, there is a large image gallery to pore over in the intervening period.

Let us know what you think of the Bugatti Vision GT by joining the discussion on our forums!

Andrew Evans · Sep 14, 2015· Comments
Gran Turismo series partner Toyota has revealed a special, limited edition version of its Toyota Yaris hatchback, which not only bears the Gran Turismo 7 name but comes with a free copy of the game and a PlayStation 5 console.

Andrew Evans · Sep 14, 2015· Comments
After it surprisingly revealed a new car at the Consumer Electronics Show (CES) in 2020, Sony has taken the covers off a second model at this year’s show — and it looks like it might be planning to build them.

Andrew Evans · Sep 14, 2015· Comments
Porsche has officially taken the covers off its Vision Gran Turismo car, designed specifically for Gran Turismo 7 when it launches on March 4.

Andrew Evans · Sep 14, 2015· Comments
MG’s specialist design center, SAIC Design in London, has created a new concept car that’s not only inspired by gaming, but a games room itself.

Michael Leary · Sep 14, 2015· 13 Comments
Although Lamborghini has now officially pulled the wraps off its latest nostalgia project, the Countach LPI 800-4, you’re already too late to buy one.

Andrew Evans · Sep 14, 2015· 21 Comments
Genesis has unveiled a trio of new racing car concepts designed in collaboration with Gran Turismo, destined to take their places in the racing game series in the near future.

Andrew Evans · Sep 14, 2015· Comments
Nissan has taken the covers off the latest model of its flagship performance car, the GT-R Nismo, ahead of its market launch later this year.