If you’ve actually been able to get hold of a PlayStation 5, there’s a good chance you will have been getting your next-gen driving game kicks in Destruction AllStars over the last couple of months. The PS5-exclusive, cars-and-stars arena battle royale game launched on February 2, and has been available for free to PS Plus subcribers ever since.

Lucid Games, the successor of Project Gotham Racing creator Bizarre Creations, developed Destruction AllStars for Sony Interactive Entertainment specifically for the PS5, and an interview with Lucid and Sony XDev (External Development) Europe posted today on the PlayStation Blog reveals quite a bit about how the title benefits from the console. That also informs what capabilities are available to other developers working on PS5 exclusive games, including Polyphony Digital and Gran Turismo 7.

A key focus in the interview is, of course, the DualSense controller. It’s something we heard about several times in the lead up to the PS5’s launch, with PD’s Kazunori Yamauchi commenting on how the controller might change GT7. 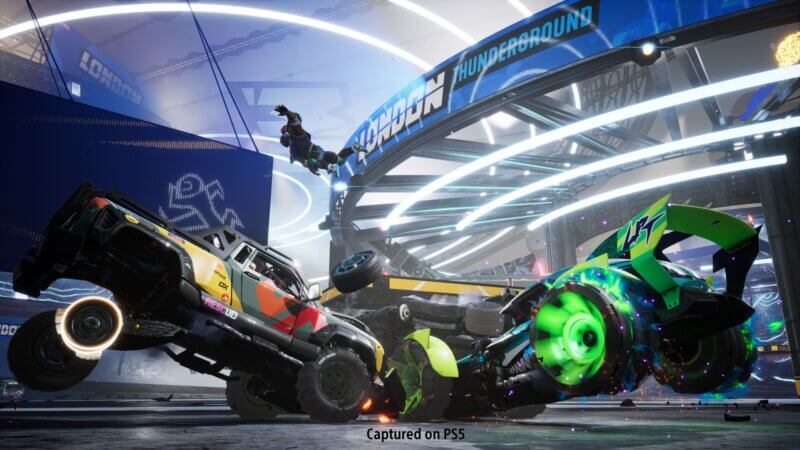 Colin Berry of Lucid makes further reference to both the adaptive triggers and the controller’s haptic feedback. For Destruction AllStars, which is all about smashing cars up, the triggers resist more and more as your car gets more damaged, making both the brakes and accelerator harder to use.

The haptic feedback also delivers additional sensations depending on the strength and direction of a vehicle-to-vehicle collision — and in fact on player character footsteps as they run around the arena. Berry likens the experience to the graphical touch of adding shadows to characters to make them feel more connected to the environment they’re in.

Perhaps of more specific interest for racing game fans though is how the additional processing performance of the PS5 allows Destruction AllStars to visually represent collisions. The game features real-time vehicle deformation, but also has vehicles made from hundreds of individual components that can also deform, shatter, detach, and even impact on other vehicles.

“The cars themselves are very highly detailed too, with many damageable parts that can rattle and flap about and detach on-impact. Being able to simulate all of this on top of everything else really adds to the gameplay experience, meaning the players can create some truly memorable moments of carnage with epic pile-ups, cars deforming and exploding into so many parts, wheels and doors bouncing off you as you plough through a field of opponents – we really wanted to create an interactive experience that felt real and wasn’t just smoke and mirrors – PS5 lets us do that.

“The PS5 has an impressive GPU architecture with a great many Compute units. We make full use of this by shifting complicated work that would be traditionally done in vertex and pixel shaders to these specialised Compute units. One area we do this is the visual damage modelling, with vertex deformation and the many layered cosmetic damage effects (scratches, dents, holes etc) being performed in Compute. This greatly reduces the load on the GPU and allows us to maintain a high level of fidelity in our damage representation without compromising model detail in other areas.”

The article suggests upwards of 200 individual parts in each car, making for a total of 32,000 individually simulated components rattling around the game’s arena. That’s something that heavily depends on how the vehicles are modeled, and the car list of Destruction AllStars isn’t drawn from real-life vehicles, which provides freedom from manufacturer licensing conditions. However, even titles which use real cars — like Gran Turismo — commonly employ manufacturer CAD data which would allow for this kind of fine detail.

For now Destruction AllStars is probably the best example of what the PS5 can bring to driving games — at least until GT7 arrives in 2022. It’s free to all PS Plus subscribers until April 6 when it will revert to $19.99 — still a discount compared to its original list price of $69.99.

Jordan Greer · Apr 1, 2021· Comments
After I had the opportunity to be one of the first people to play Gran Turismo 7 with PSVR 2 last week, I also had the chance to speak with Gran Turismo creator Kazunori Yamauchi for a one-on-one interview to discuss the new hardware.

Andrew Evans · Apr 1, 2021· Comments
Need for Speed and sports clothing brand Puma have teamed up for a crossover capsule collection with game-inspired clothing that allows you to match your avatar from the virtual environment of NFS Unbound.

Gary Slater · Apr 1, 2021· Comments
February has graced us with its presence, and has also brought along a new Spring season for Forza Horizon 4. We’re into the closing stage of Series 57, with one more week of cars to win and events to complete before the next series arrives.

Andrew Evans · Apr 1, 2021· Comments
The new Series of Forza Horizon 5 is here, celebrating all things Japanese automotive across the next four weeks.

Jordan Greer · Apr 1, 2021· Comments
I just got back from a trip to PlayStation’s North American headquarters where I had the chance to be one of the first people to play Gran Turismo 7 on the PSVR2, and I’m here to tell you all about it.

Michael Leary · Apr 1, 2021· Comments
Ubisoft has announced the third installment of its multi-vehicle-type racing game series The Crew will be called The Crew Motorfest, and is on the slate for a launch later in 2023.

Andrew Evans · Apr 1, 2021· Comments
Competition Company has announced that its new racing sim, Rennsport, has missed a second scheduled milestone on its approach to a late-2023 launch, with its closed beta phase once again postponed.