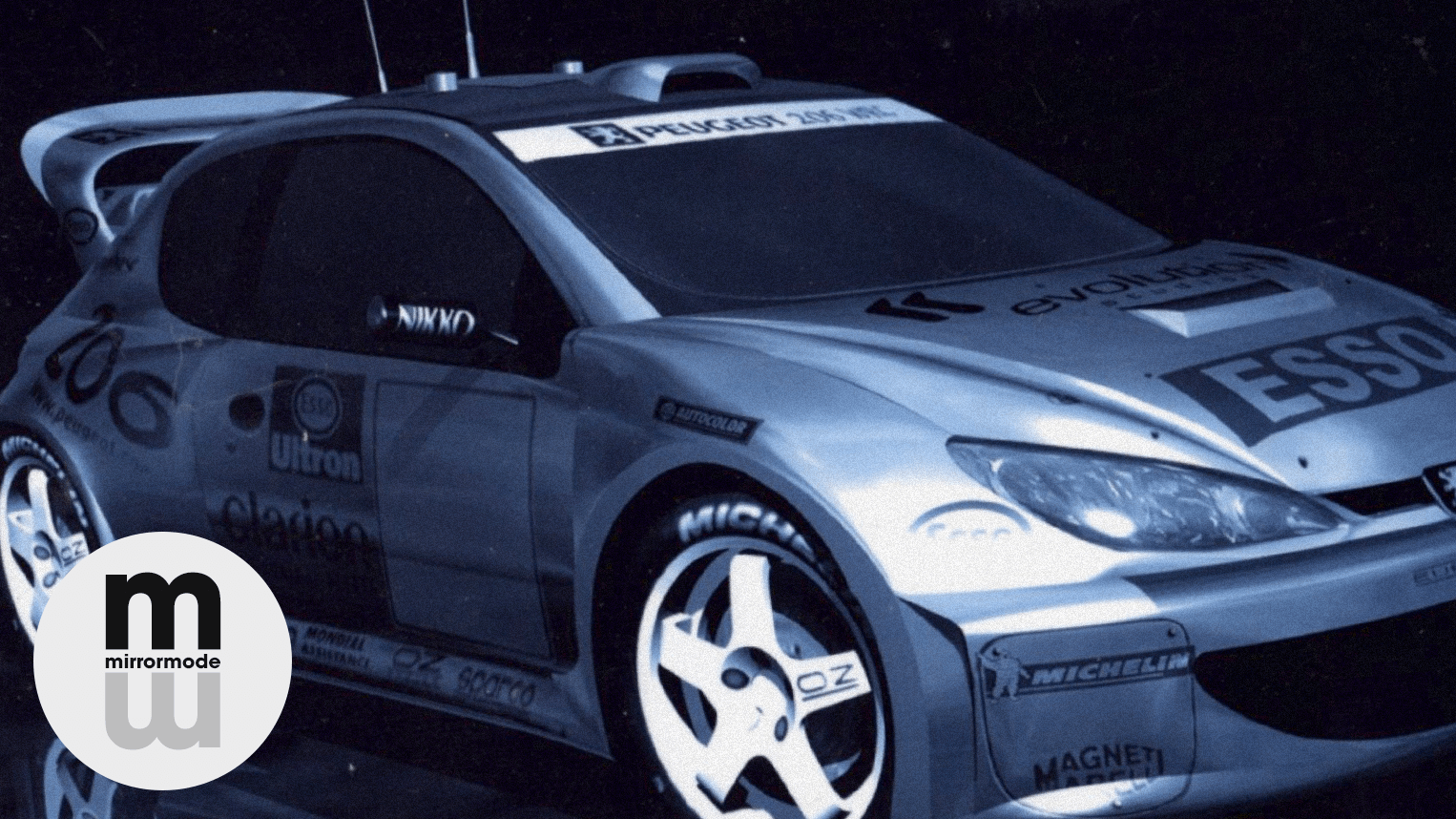 Every simulation strives for authenticity on some level. Typically it’s in the physical sense, and has something to do with mathematics and the accuracy of a handling model. But not always.

For its day, World Rally Championship — the first game in Evolution Studios’ officially licensed rally series for Sony — was a reasonably realistic affair. The title included all seven factory teams that participated in the 2001 campaign, alongside their drivers. The core Championship mode steered players through each of the 14 rallies on the calendar that season, spanning the full range of surface types and varied weather effects.

In those ways, Evolution Studios ticked all the boxes a licensed WRC product should’ve at the time. The experience in the car wasn’t what you’d call visceral, and the single player loop was a bit too dull and easy out of the gate, but it sufficed. Because the real magic happened in between the stages.

Eighteen years on, WRC still manages to put on a masterclass in how licenses are done properly. In fact, of all the rally titles I’ve ever enjoyed, it’s probably the one that has left the deepest impression on me. Not because it was technically phenomenal, but because of Evolution’s unyielding commitment to brand authenticity.

Allow me to establish a bit of personal context, if I may. WRC released in North America in March of 2002 (well into the season after the one on which the game was based, mind you). Around this time, a young Adam was beginning to watch the actual WRC on television. And to a budding motorsports fan, the similarities between the broadcast product and its interactive tie-in were astounding.

WRC wastes no time thrusting you into its world. The intro film is a three-minute montage that puts the sport’s torturous beauty on blast. A compilation of real-world footage set to Faithless’ “Speed”, it captures the extraordinary odyssey of rallying with style and the respect it deserves. I’m not certain whether it was produced by Evolution or the TV crew, but the fact that I’ve even wondered that speaks volumes regarding the video’s efficacy. It’s truly a work of art.

You’ll hear a lot of “Speed” during your time with WRC — in the main menu, in the team select screen, when choosing a rally to conquer and even in between stages. It can feel quite repetitive, but then it fits so well with the early-aughts WRC aesthetic — not to mention the WRC’s official theme at the time — that I was never too bothered by it.

Similarly to the intro film and music, the interface design was lifted entirely from the WRC’s broadcast graphics. Everything from the trademark typeface, which the series still uses to this day, to the clean black-and-white motif and reliance on intersecting lines adhered strictly to the series’ new visual identity.

While it could be said that the actual experience of playing WRC left something to be desired (more on that later), Evolution’s ambition did trickle into gameplay in certain ways. The cars were fully rendered inside as well as out, and fitted with multiple in-car camera options that replicated the driver’s view as well as a central perspective from behind the two front seats, that would assuredly be familiar to WRC’s TV audience.

Replays occasionally turned the perspective around at the driver and co-driver, revealing 3D-modeled likenesses of the series’ 2001 cast of characters, like Richard Burns, Tommi Mäkinen and one competitor simply named “Ford Driver” who just so happened to have his own rally game at the time. Go figure.

Evolution Studios’ stewardship of the official WRC license saw the studio releasing a new installment every year until 2005’s WRC: Rally Evolved. The developer made strides with every release, and by the time WRC 4 came around, Evolution had both figured out how to get the most out of the PlayStation 2 and settled upon the proper formula for a thoroughly engaging rally racer.

During the run up to the first effort, however, the studio had much to learn. WRC is a bit bland at the wheel, with overly forgiving physics that fail to connect you to the road, excessively wide stages that rarely challenge, and that early-PS2 aesthetic of hazy textures and a color palette largely composed of shades of gray and brown.

On its own, the game might have sufficed for the avid rally fan. But in the context of competing titles, WRC simply couldn’t compare with the visceral, arcade punch of RalliSport Challenge or crushing realism of Colin McRae Rally 3. Both released some months after WRC, but they gave anyone little reason to return to Evolution’s maiden attempt.

If you lived in Europe at the time, this wasn’t a huge loss. Because almost exactly a year to the day after the first WRC’s release, you’d have the greatly-improved WRC II Extreme, with its Vision GT-like takes on then-current rally machinery that evoked the spirit of the legendary Group B class.

However, the rest of the world never got the chance to play those games. Sony neglected to bring all the WRC sequels stateside, much like it neglected to ship most of its PS2-era Formula 1 titles outside Europe and Asia. Sure, the numbers probably justified that difficult business decision, but none of that made the snub any less painful for rally fans on my side of the pond.

Adding to that disappointment, history tells us WRC in its release guise bore little resemblance to the game Evolution Studios really wanted to make.

The December 2000 issue of Edge previewed WRC, then called WRC 2001, about five months out from its targeted release date and close to a year before the game would actually come out. Originally, WRC went by a different moniker — Evo Rally — and was in production for PC as far back as 1999 until Sony snapped it up for its upcoming home console.

Edge’s feature is peppered with screenshots of a prototype overlaid with broadcast graphics that predate the series’ rebranding initiative. Some of the cars in these images, like the Skoda Octavia, are running older liveries, while the Seat Cordoba and first-gen Subaru Impreza wouldn’t make it to the final game in any form.

But the most interesting surprises come from Martin Kenwright, Evolution’s managing director at the time, who rattled off a series of plans for the game that unfortunately never came to pass.

“We followed the calendar of the real WRC and we very much work on the idea of progressing through it,” Kenwright told Edge. “We take into account gameplay issues and learning curves so that people should be able to ease into it very easily, be able to pick it up, but progressively it will become more difficult. And then to underpin all of this — as I said it’s kind of a TV-type narrative we’re running — we want to interject TV commercials in between stages.”

The preview goes onto talk about motion-captured spectators rolling cars back over after a crash. Kenwright discusses the inclusion of a multi-year championship mode, whereupon the player, after winning the driver’s title, returns to the WRC the following season with a victor’s livery and stages reduced to “actual WRC width” for a more formidable challenge. Neither the TV ads nor any of these features made it to the final version.

Edge’s full story dives deep into WRC at this halfway point in the game’s development, and is well worth a read for anyone eager to tantalize themselves with what could have been. I’m not too heartbroken over the omission of TV adverts; it’s a millennium-era idea of world-building that likely sounded amazing at the time, but assuredly would have been grating in practice. That said, the game really could have used those narrower stages.

Eighteen years on, there’s not much of a reason to go back and revisit WRC, unless you are especially keen on tracking the series’ progress, or Evolution Studios’ ascension to becoming one of Sony’s premier first-party development houses. You know, until it was canned.

And yet, I’ve never been able to shake this admiration for the game. Partly because without those better WRC sequels, I never had much of a choice, and partly because its visual language crystallizes an era of great change for the World Rally Championship itself.

To Kenwright and his team — and I suspect many other developers around the late ‘90s and early ’00s — realism transcended physics and polygons. It was an emotional space. Sure, the interactive product existed to spark our imaginations about what it might actually feel like to participate in a rally. But it also connected with us on a more personal level, as fans, through those little moments of déjà vu that transported us back to watching the WRC live, glued to the television and overcome with awe over one of the greatest spectacles in motorsport.