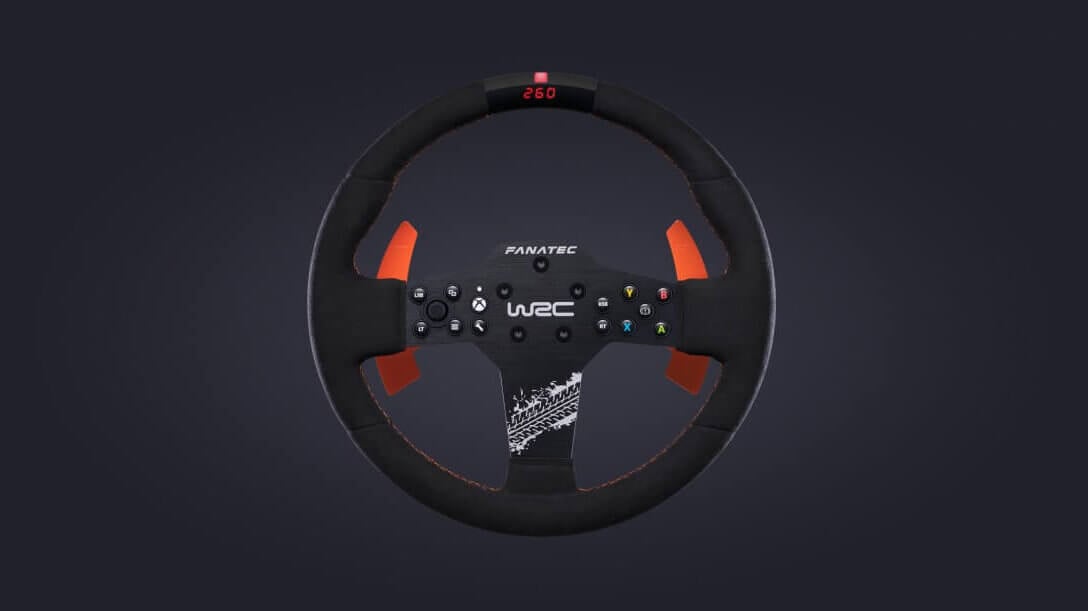 To coincide with the release of WRC 9, Fanatec has revealed a new, officially licensed wheel. Going by the name of the CSL Elite Steering Wheel WRC, the controller will be the official WRC Esports wheel when the tournament gets underway.

The CSL Elite WRC is available to order today, and you can pick it up from the Fanatec store via the links below:

Naturally, as a CSL Elite product, the overall look is somewhat familiar. However, there’s a number of little touches to make the wheel unique, along with some under-the-skin changes.

The wheel center feature brushed aluminum spokes, while the 11.8-inch (300mm) rim itself is Alcantara with contrast orange stitching. That orange theme continues onto the new shift paddles. These are removable, and Fanatec notes that players may find the Static Shifter Paddles more comfortable for rally action. The WRC logo and tire tread graphic complete the look.

The wheel is compatible with PC, PlayStation (4 and 5), and Xbox consoles, with the wheel’s electronics allowing any connected base and attached peripherals to function on Xbox. A white LED on the wheel lights up in Xbox mode, which Fanatec interestingly notes will grant compatibility with Xbox One and “New Generation Xbox” — perhaps another hint that the Xbox Series X will not be alone come November.

You’ll also be able to play in Xbox mode on Windows 10 with Xbox Play Anywhere titles, and the Xbox button caps can be swapped for the included alternative items.

Andrew Evans · Sep 4, 2020· Comments
Serious sim racing can be an expensive business. Sim racing kit will set you back hundreds of dollars — or more — and that’s without considering a sturdy place to mount it.

Andrew Evans · Sep 4, 2020· Comments
After more than a year of waiting, Thrustmaster has finally revealed its new Direct Drive wheel: the T818.

Andrew Evans · Sep 4, 2020· Comments
If you’ve been waiting to get your hands on the official wheel of Gran Turismo 7, the Fanatec Gran Turismo DD Pro, now might be your chance as Fanatec is once again carrying stock — but you’ll need to be quick.

Jordan Greer · Sep 4, 2020· Comments
Logitech has just revealed the G PRO Racing Wheel, and it’s a product I never thought it would actually make. The company has a long history of producing reliable, entry-level sim-racing hardware, but it has always ceded the higher-end of the market to companies like Thrustmaster and Fanatec. With this new direct-drive wheel, all of that changes in a pretty big way.

Andrew Evans · Sep 4, 2020· Comments
In a surprise shot across the bows of high-end driving wheel manufacturers, Logitech has announced its new direct-drive G PRO wheel — and it will be available from today, for both Xbox and PlayStation.

Andrew Evans · Sep 4, 2020· Comments
After a brief tease earlier in the year, Thrustmaster has announced it will be revealing its first ever direct drive steering wheel base on November 17.

Michael Leary · Sep 4, 2020· Comments
If you’ve been waiting for an official “pro” controller from Sony, today’s your day. Sony has revealed the “ultra-customizable” DualSense Edge at Gamescom Opening Night for the PlayStation 5.