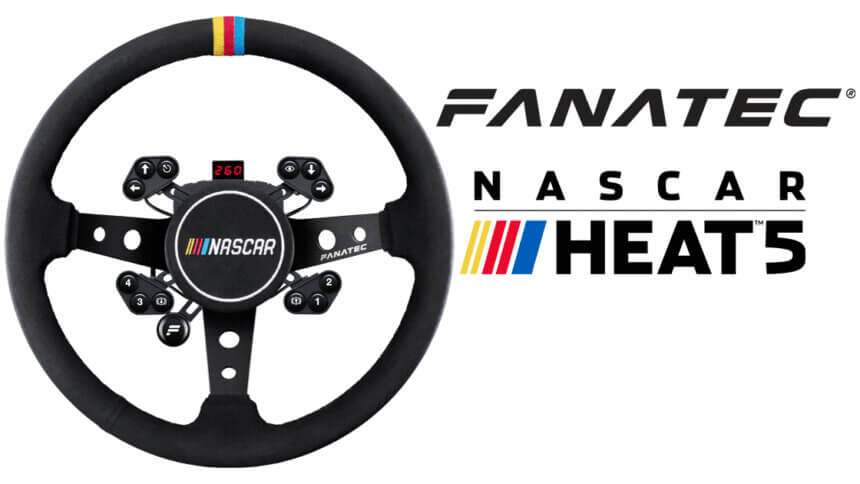 Fanatec has joined forces with NASCAR Heat 5, which launches next week, to become official steering wheel partner. The agreement will see Fanatec supply equipment for the official eNASCAR Heat Pro League, as well as a prominent branding position in the game itself.

The eNASCAR Heat Pro League has almost finished for 2020. There are a handful of races left, including the Wildcard and Championship races, which will see a total of $200,000 awarded to drivers in the 28-car field. This likely means that the drivers, each of whom represents a real-life NASCAR outfit, will be equipped with Fanatec gear for the 2021 season.

The equipment will almost certainly include the Clubsport Steering Wheel, an officially licensed wheel from Fanatec. This 13.8-inch (350mm) diameter, aluminum and Alcantara wheel mimics the item you’d find inside a real Cup car. The hub itself has 16 integrated buttons, but there’s also four, three-button clusters that players can swap and position freely, Fanatec’s seven-way “FunkySwitch”, an LED display, and two types of adjustable paddle shifters. It’s compatible with any Fanatec base.

“NASCAR is without a doubt one of the greatest and most spectacular racing series on the planet and we are proud to work with Motorsport Games to make the virtual experience even more realistic. Fanatec will support the eNASCAR Heat Pro League with our NASCAR-licensed products for many years to come.”

“Fanatec is a perfect partner for NASCAR Heat and the eNASCAR Heat Pro League. The level of authenticity and realism that Fanatec brings to its products will further engross our players into the world of NASCAR. We look forward to a long and fruitful partnership.”

When Heat 5 launches on July 7, on PlayStation 4, Xbox One, and PC, it will feature all of the official teams, cars, and drivers from across the NASCAR family. That includes not only the Cup Series and Xfinity Series, but the Truck Series and Dirt Series too. There’ll be 34 tracks, which includes officially licensed NASCAR courses and some fictional dirt ovals too.

FanatecNASCAR Heat
3 Comments Discuss this post in our forums...
Test Your Badge Knowledge With Our Car Logo Quiz