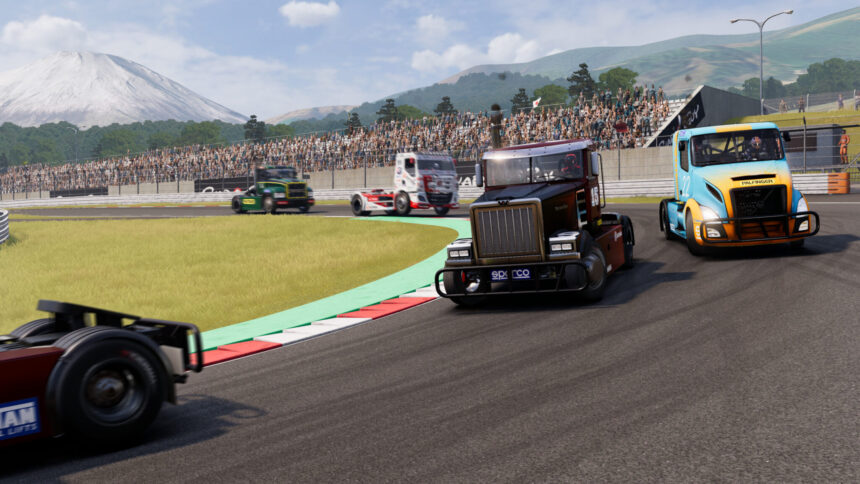 In April, Bigben Interactive announced its plans to release an official game for the FIA Euro Truck Racing Championship. Suffice to say, this will be a sim racer exclusively featuring hulking big rigs, the first of its kind. It joins the likes of official WRC, Blancpain GT, and Formula 1 games in the genre.

When announced, the target was this month, and now Bigben has given the game a date: July 18. Players will soon be able to throw these 11,000lbs beasts around the track. If that figure alone is impressive, try this: the 13-liter turbo diesel makes a whopping 1,200hp and 4,000lb-ft of toruqe.

The big rigs are capable of reaching 60mph in five seconds, with a top speed of 100mph. When it comes to the world of trucks, those figures are terrifying, without question.

To mark the occasion, Bigben has released a new gameplay trailer:

As with any official title, you can expect everything entailed in the series. That means players can get behind the wheel of 45 trucks from official manufacturers, including Mercedes-Benz, Volvo, and MAN. All 20 teams and championship drivers are also included in the package.

Adding to that, players can put the machines to the test around all eight circuits of the ETRC. If you’re unfamiliar with the series, those circuits are as follows:

If that weren’t enough, players will also have iconic circuits to contend with, including Laguna Seca, COTA, and Fuji Speedway. With dynamic weather, unique physics and inertia for each vehicle, and manually managing brakes and water cooling, players will have their hands full.

We can’t wait to see the final game in-motion in a little over two weeks time. FIA ETRC releases July 18 on Nintendo Switch, PC, PlayStation 4, and Xbox One.

FIA European Truck Racing ChampionshipKylotonn
97 Comments Discuss this post in our forums...
Can You Beat the Impossible Gran Turismo Quiz?

Automotive News 8 Feb 21 by Andrew Evans
If you’re feeling glum about motorsport right now, we’ll forgive you. Every other headline these days seems to be a big brand pulling out of some race series or other.…

Automotive News 5 Feb 21 by Andrew Evans
New US brand Czinger Vehicles will officially reveal its first car at the Geneva Motor Show next month, and it’s quite the debut. Known as the 21C — shorthand for…