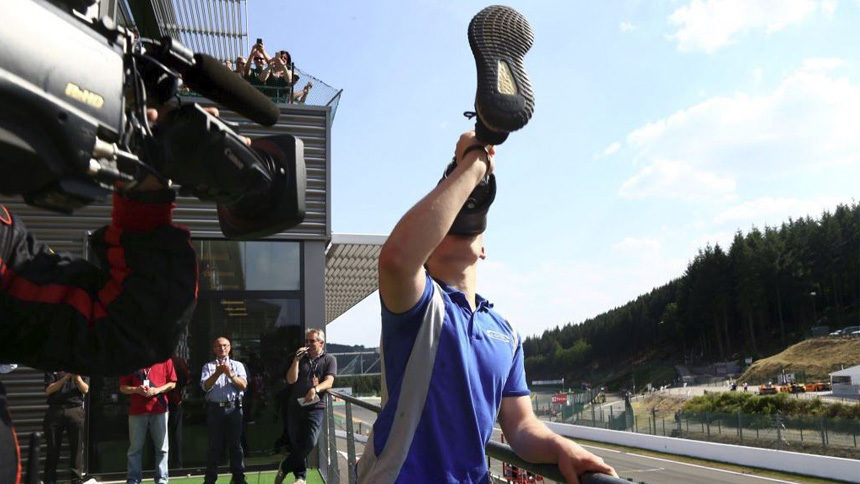 If you’re an F1 fan, you’ll have heard of Daniel Ricciardo’s podium celebration, The Shoey.

When the Australian Red Bull driver wins a race, he fills up his sweaty racing shoe with the victory champagne and chugs it. It’s a popular celebration in his homeland, but Ricciardo’s use of it has brought the Shoey to global attention. He’s coaxed celebrities and drivers from Nico Rosberg to Patrick Stewart and even Charlene, Princess of Monaco, to join him in necking bubbly from his race boots.

But the Shoey is old hat now. There’s a new celebration in town: it’s called the Leggy and it comes via teenage British racer Billy Monger.

You might remember Monger’s name. He’s the driver who, in 2017, suffered a horrifying smash during a Formula 4 race at Donington Park. Unsighted by cars ahead of him, Monger collided, flat-out, with the back of Patrik Pasma’s immobile car. Monger suffered life-threatening injuries, which resulted in amputations to both legs.

This would probably deter most drivers. Monger isn’t most though, and just nine months after his accident he was back behind the wheel of a race car, specially adapted for his requirements. A mere 16 months after a crash that would put most of us off driving for life, Monger is back in competitive racing — and back on the podium.

On July 22nd, Monger took a comfortable third place for Carlin in an F3 race at Spa Francorchamps. He joined winner Linus Lundqvist and second-place Tom Gamble on the podium for a celebration.

Inspired by the Shoey, Monger popped one of his prosthetic legs off, filled it up with champagne and took a good swig. He even managed to get Lundqvist to join him.

So hats off to Monger on his third-place finish and coining what’s probably our new favorite — and rather niche — celebration. Hopefully it won’t be the last we see of the Leggy.