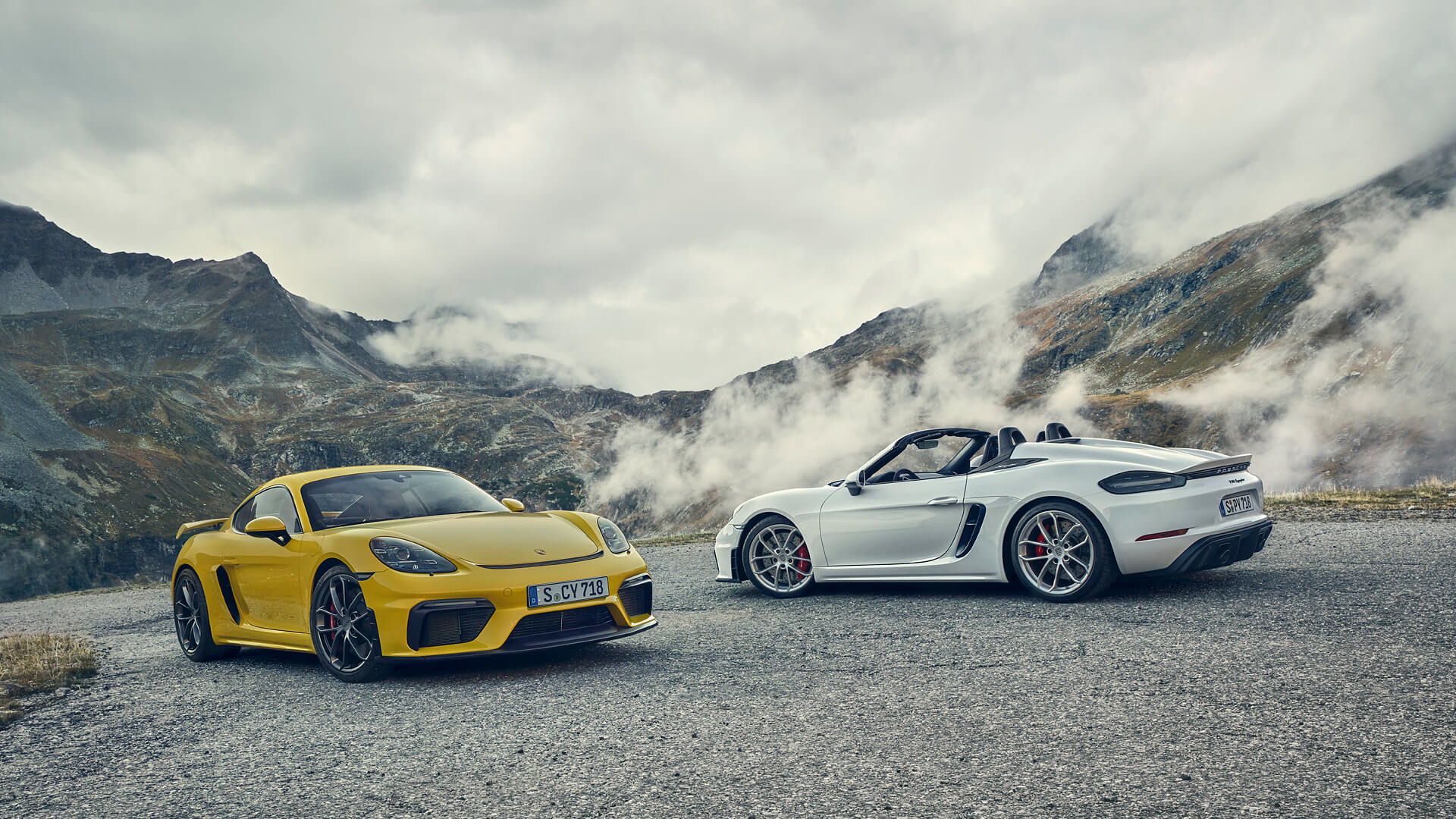 This article was published by Kyle Patrick (@SlipZtrEm) on June 17th, 2019 in the Automotive News category.
Last edited by a moderator: Jun 18, 2019

Come on Porsche...that’s a Boxter.

For sale: one kidney. Mild wear, lots of life left in it.

The original Cayman GT4 is one of my favourite road cars of any era. This improves on it in just about every way (though I still think I prefer the rear light/spoiler treatment on the 981.1). It's all I want in a car, in a way that's probably more useable on a daily basis than most other all-timers on my list.

Interesting that Porsche is using an enlarged and non-turbo version of the Carrera's 3.0L instead of turning the wick down on the GT3 engine. I was under the impression that they're all based on the same basic architecture, but perhaps someone more well-versed can explain. I'll just be busy drooling.

SlipZtrEm
For sale: one kidney. Mild wear, lots of life left in it.
Click to expand...

Besides a GT3 RS, the GT4 is the only other Porsche that interests me.

It's called the Boxter Spyder.

mustafur
It's called the Boxter Spyder.
Click to expand...

Technically it isn't: it's the 718 Spyder. I left the second 718 out of the headline because it just gets ungainly, like saying I've ordered us a McDonalds McChicken combo and a McDonald's Big Mac combo.

Porsche crowd seems to like the Spyder, mixed reactions on the GT4. Some owners not happy with certain details or the performance for the $16K increase in price.
K

The GT4 has a proper manual.

Not in Europe anymore, new WLTP regulations have imposed restrictions on how loud cars can be out the factory. Even some cars with turbocharged engines (like the new Supra) have been muted, so high-revving naturally aspirated engines face a bigger penalty.

As for the GT4 & Spyder, it's like Porsche let Alpine have the limelight for a few weeks then they remind us who's the king of track-focused sports cars - both are extremely desirable!

FT-1
Not in Europe anymore, new WLTP regulations have imposed restrictions on how loud cars can be out the factory. Even some cars with turbocharged engines (like the new Supra) have been muted, so high-revving naturally aspirated engines face a bigger penalty.

As for the GT4 & Spyder, it's like Porsche let Alpine have the limelight for a few weeks then they remind us who's the king of track-focused sports cars - both are extremely desirable!

Well i drove a Porsche 911 gt3 and thst thing was loud when you put the gas down. It was just may this year. So that still not that long ago
K

FT-1
Not in Europe anymore, new WLTP regulations have imposed restrictions on how loud cars can be out the factory.
Click to expand...

Are you sure about that? AFAIK the new WLTP regulations are all about emissions.

I always liked the Boxster and I've wanted one since their introduction back in the mid 90s. I flirted with the idea several times over the years but it would have taken a major hit on the budget and required too many other practical sacrifices. When the 718s arrived, I was a bit disappointed with the direction Porsche (and most other manufacturers) were going with small displacement FI engines. The flat-6 was always synonymous with the Boxster/Cayman in the same way the inline-6 was with the BMW 3 series. (The winds of change are really upon us).

I really thought I had missed the boat and regretting not buying one when I had the chance. It pushed me to bite the bullet and I bought a 2016, 981 Cayman S less than 2 years ago. And I'm SO glad I did. The car is just phenomenal.

When I had the Cayman at the dealer last fall for an oil change and radio software update, I asked about the 718 GT4. The (981) GT4 is the car I really wanted but it was too far out of the price range and they were all already spoken for by the time I was getting serious. Nothing was firm last October but it was widely suspected that the 718 GT4 would come out sometime in late 2019 or early 2020 and with a return to the flat-6 engine. And the dealer was taking deposits already back then, although I guess it was all unofficial. I spoke to the salesman for a while before he would even confirm that such a list even existed. And I was dismayed but not surprised that they wanted a $20K deposit and they seemed reluctant to really discuss it further since I'm not one of their marquis customers. In a fit of pure madness, I asked him, if I were to put down a deposit today, how long it would be before my number came up. He seemed reluctant to talk specifics but he told me, already back then, that it would probably be 2 years or more before I got my hands on one.

In reality, I'm glad I overcame the [destructive] urge. I was estimating the price point at around $90K and was doing the mental arithmetic at how much I could get for my car and if it was feasible. But we're already $10K over that number and by the time it's out the door, you can probably add another $20K on top of that in options, prep, taxes, etc. I'm glad Porsche is returning to the Flat-6. But I'm a bit dismayed at how far up-market they're climbing. I realize it's a GT car, but paying over $100K for a Cayman seems like madness. Still, there doesn't seem to be a shortage of people lining up to order one.

kikie
Are you sure about that? AFAIK the new WLTP regulations are all about emissions.

I thought WLTP regs included noise emissions too, but that doesn't appear to be the case. Must be a separate part of the EU legislation dealing with that then.

Bang for the buck, the Nissan GT-R has always been my favorite “supercar” in the $100K-$110K range, but this new Porsche 718 GT4 is an eye-popper and certainly a “value” over just about everything else in that price range (NOI the GT-R or the 911’s).

Yeah but the added turbos to the GT2 RS helps itch the suicidal tendencies of some.

Personally I prefer turbo cars, but I can see why others like NA.

The Boxster Spyder (all variants, all years) is probably the most desirable car built in the last 20 years for me. It's just outrageously sexy. Glad to see the six return for it.

100k for a Cayman, not a 911 seems a lot. Entices me to the older generations for sure, no matter the performance of the latest gen. It's not just about numbers. I suspect a 987 Cayman sounds better than a 981 or 718.

sumbrownkid
Yeah but the added turbos to the GT2 RS helps itch the suicidal tendencies of some.

Na cars sounds better that is what i pointed out
K

N/A 6 cylinder like it should be. the 4 pot is so lame in comparison.

McLaren
For those interested, the configurators are now up.

I'm a sucker for Miami Blue. 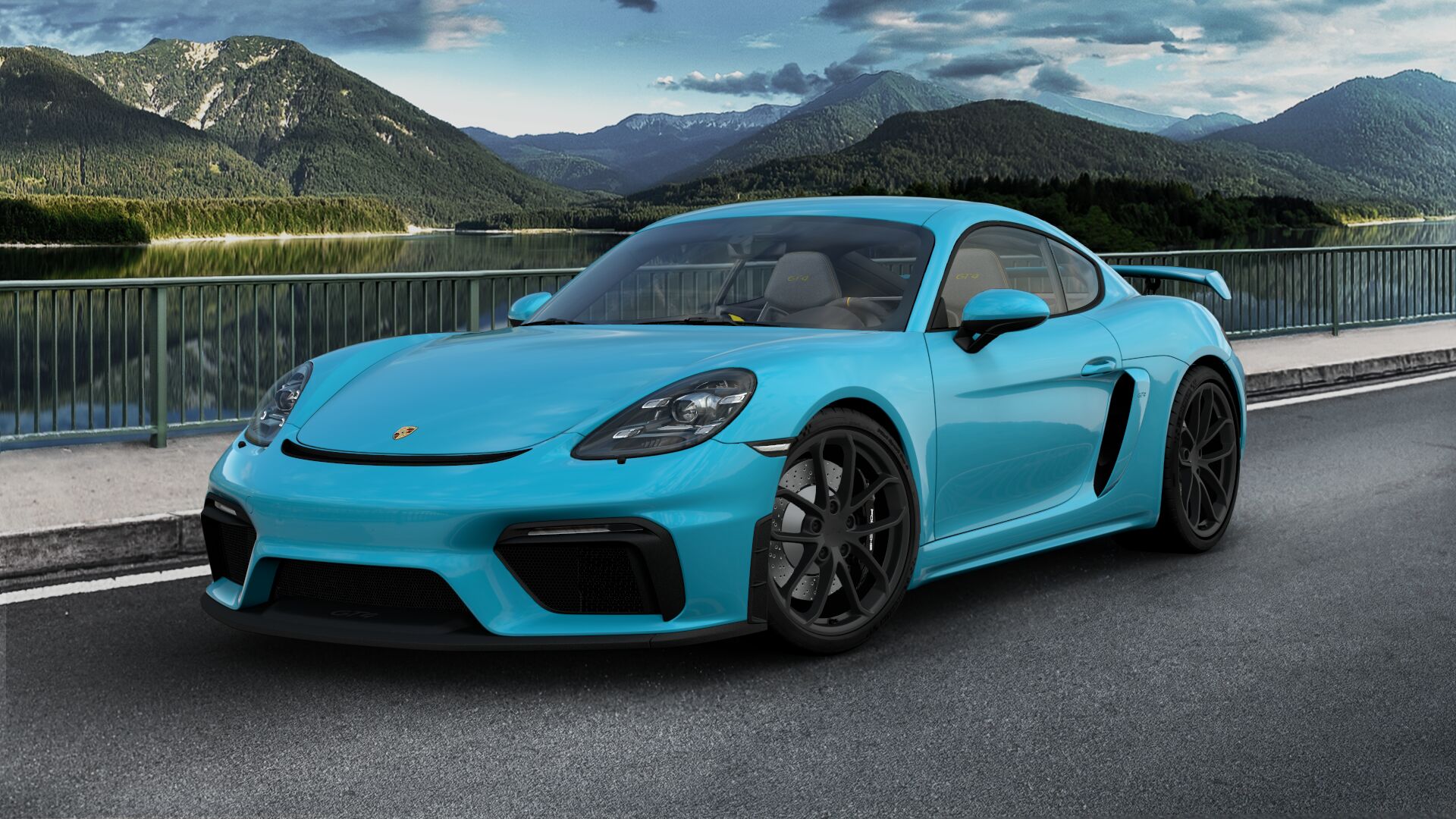 I did a tax simulation:

I'd take mine in Racing Yellow.

I really tried, but I cannot bring myself to not specify a Porsche in Silver over Red 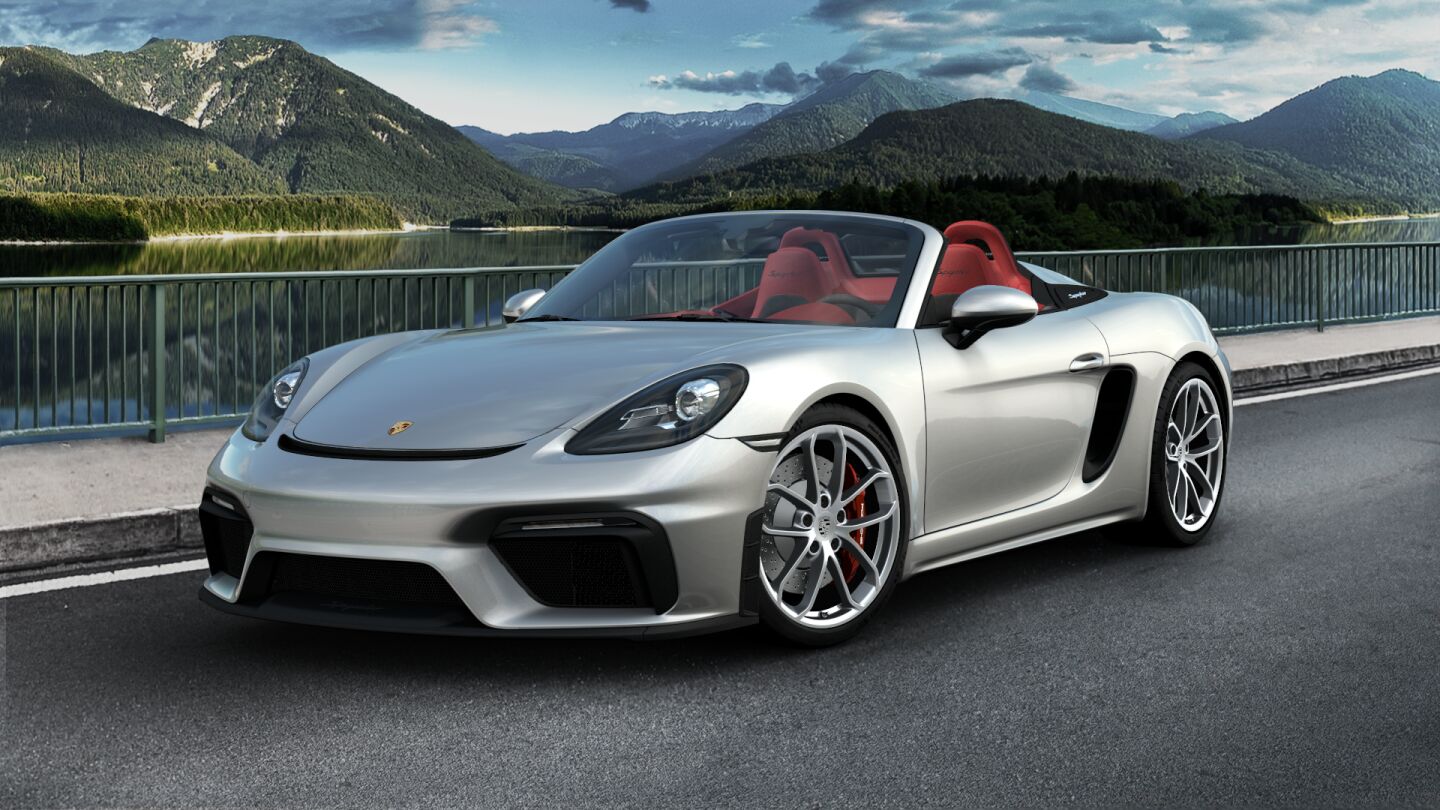 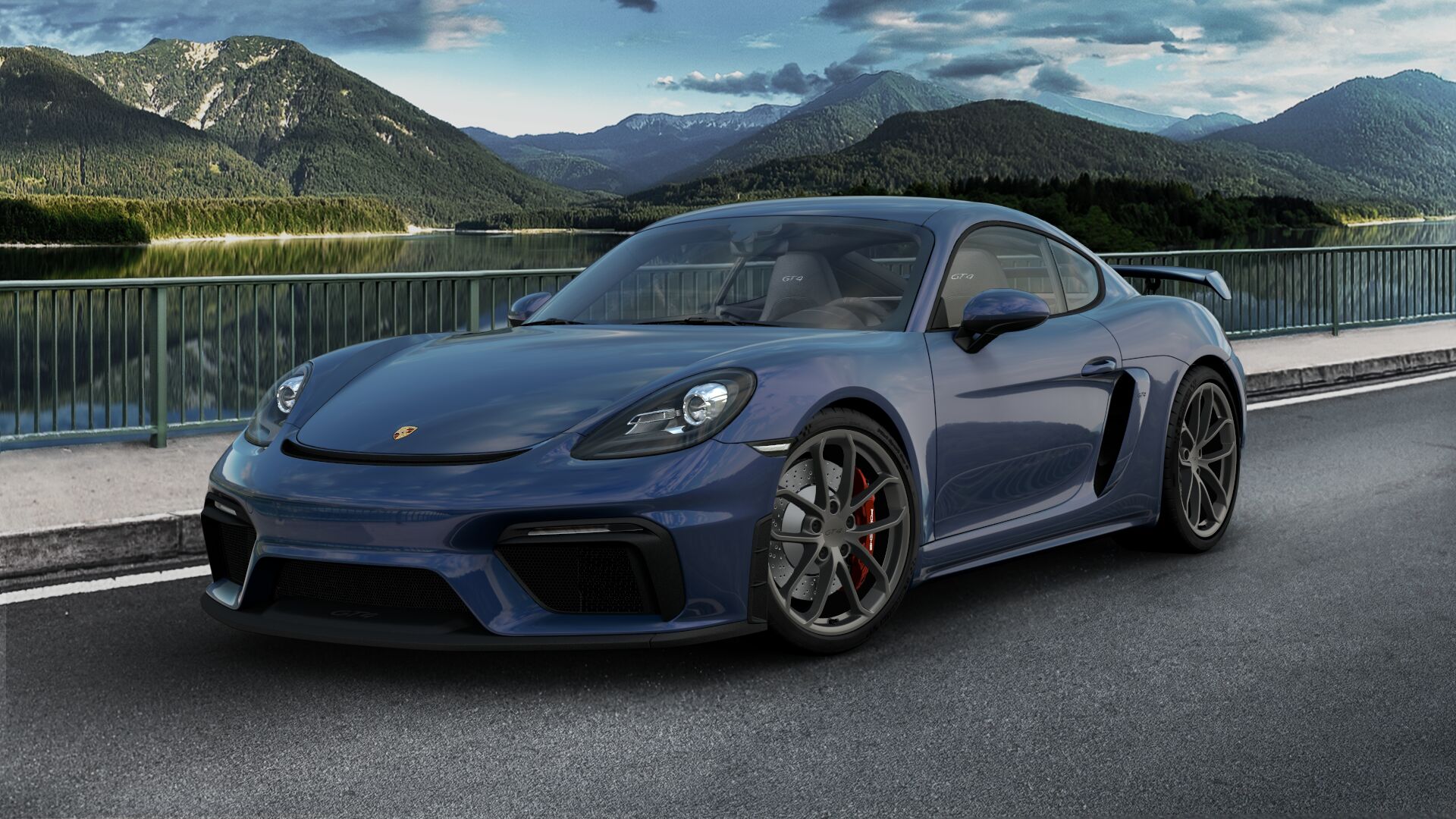 Went with Racing Yellow with some extras thrown in 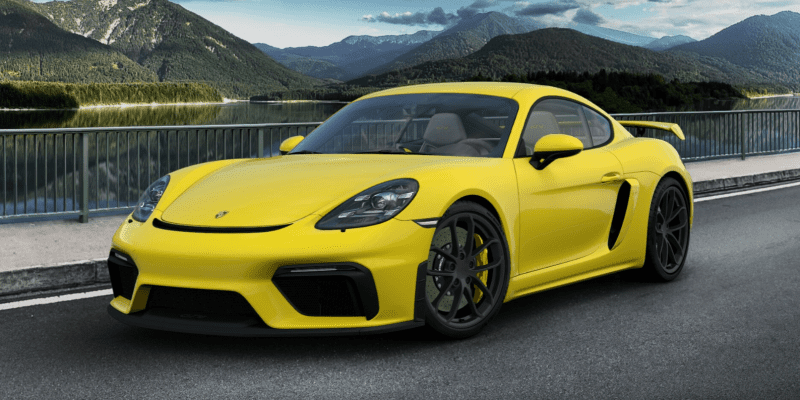 Apparently I added $20k in options, despite not even touching the ceramic discs... 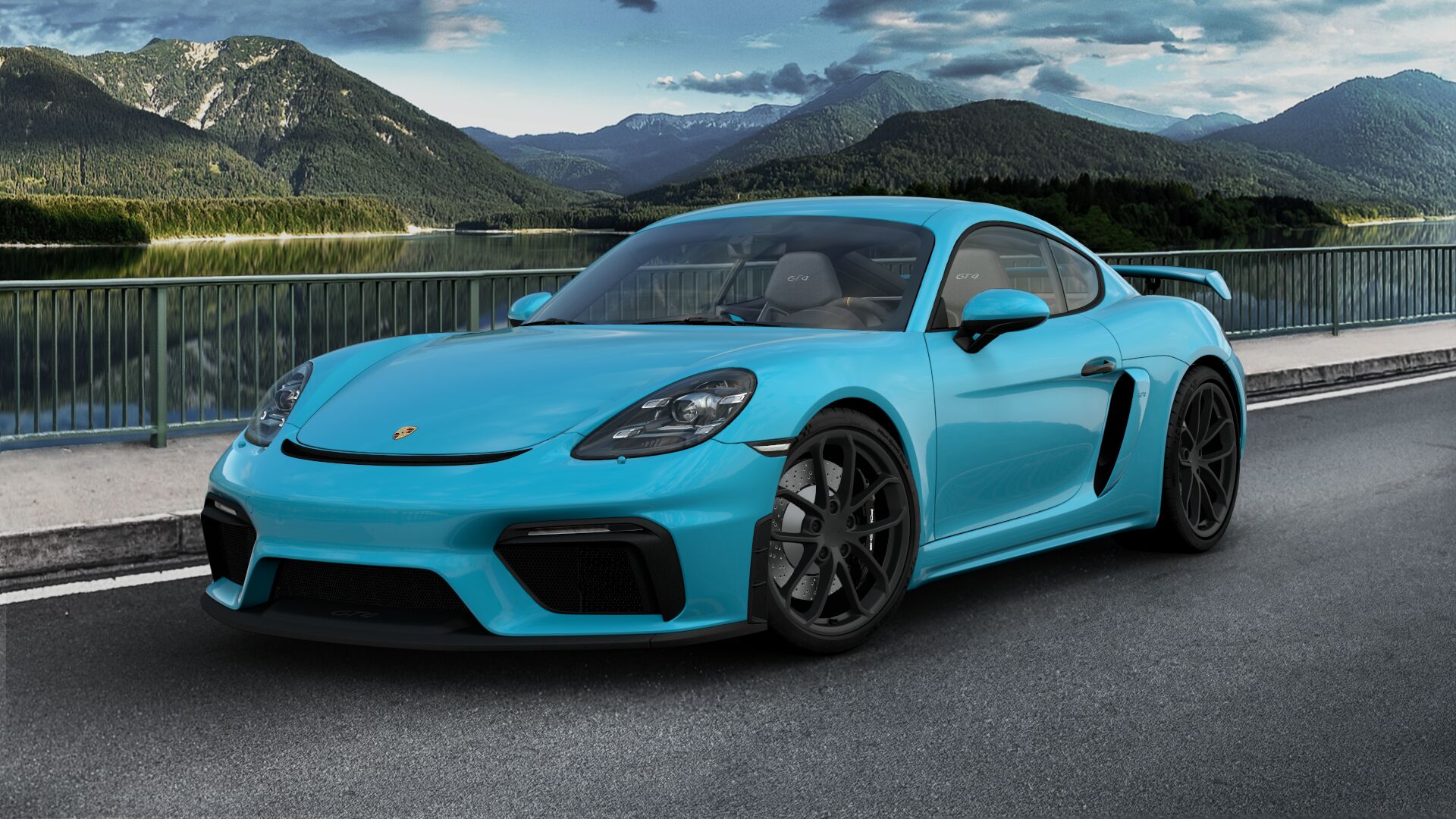 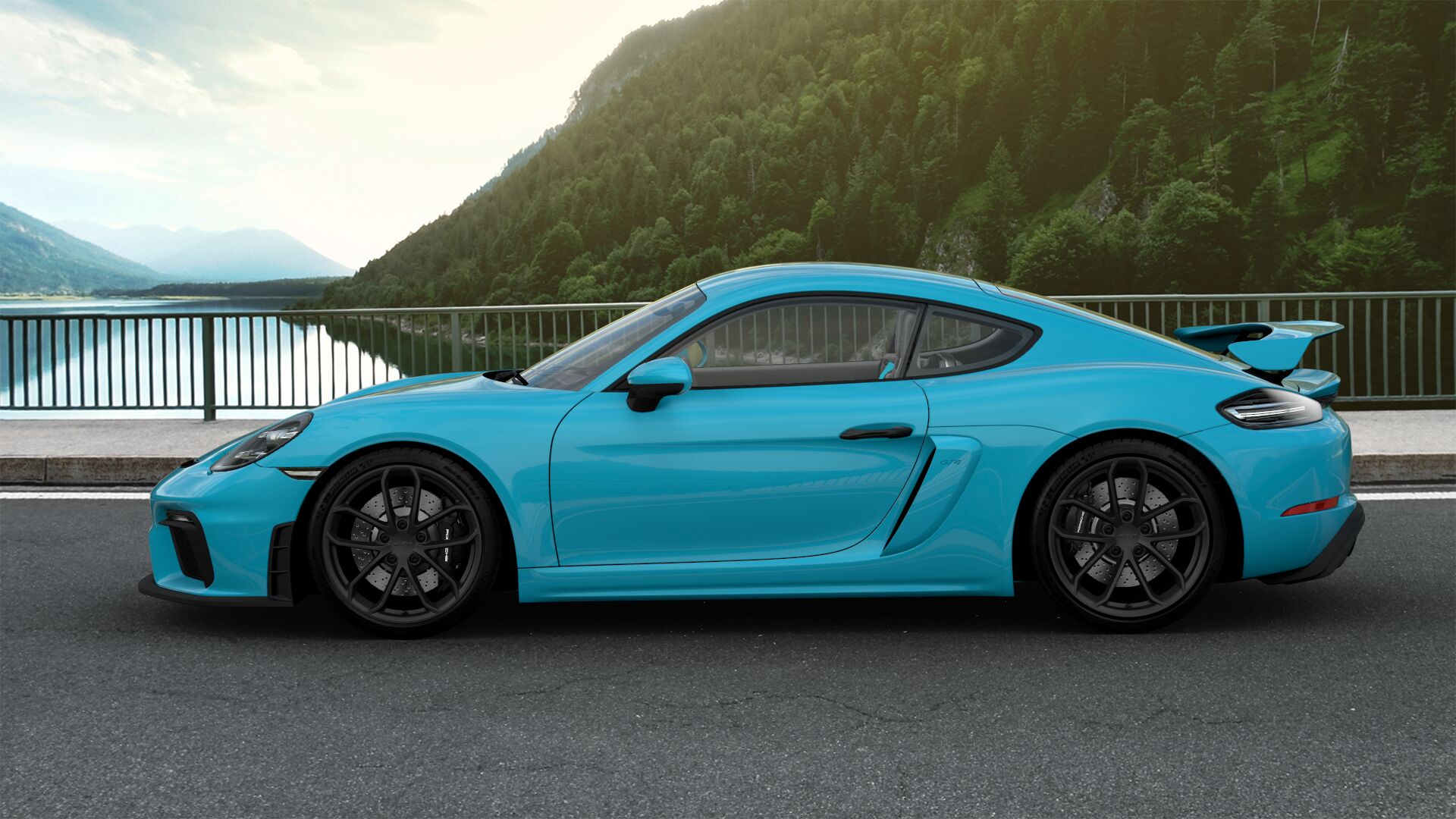 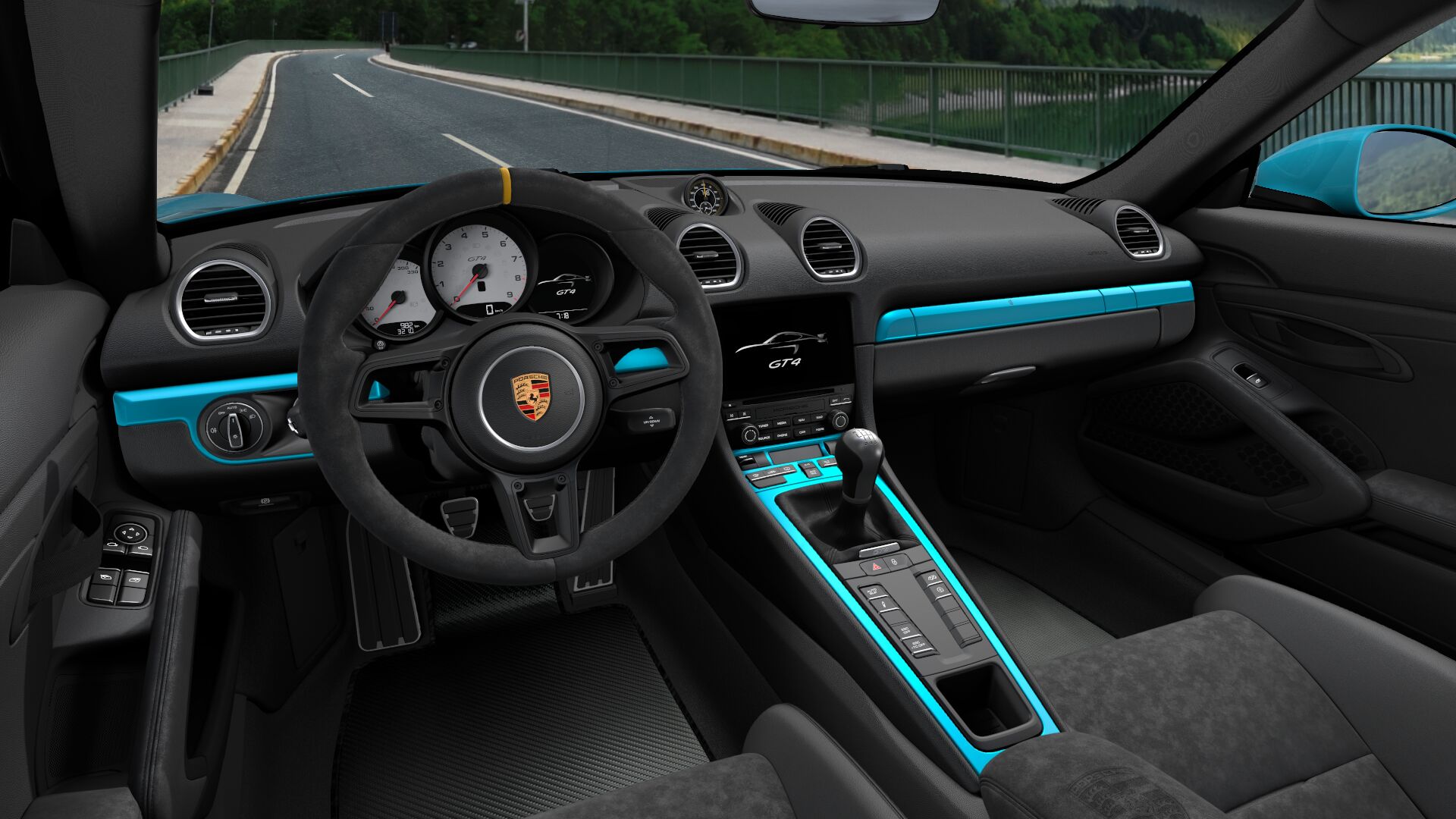 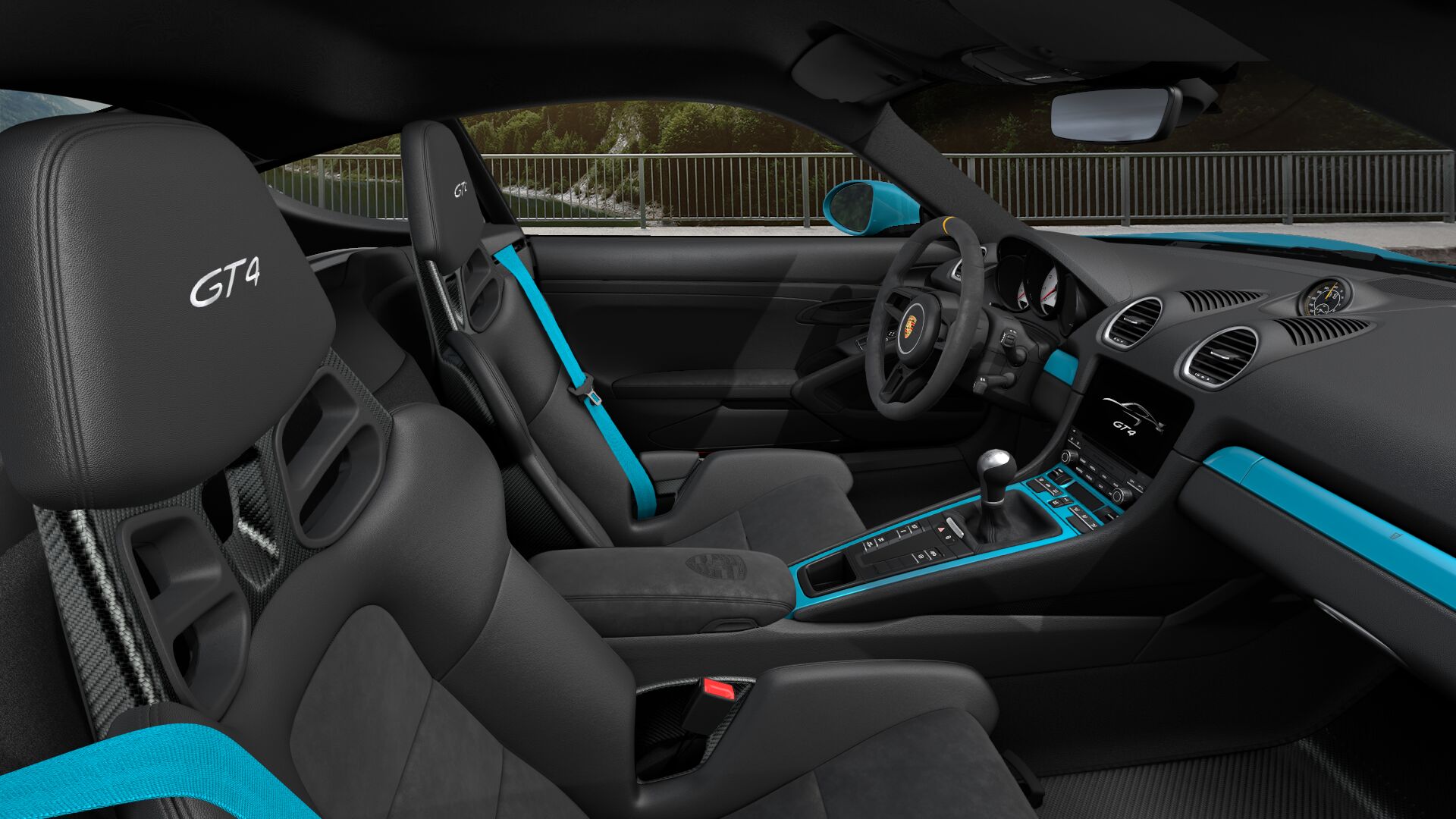 I guess it's the seats and Miami Blue. Figured the interior needed to be less gloomy, so brought the blue in. White dials because Porsche (but not the Chrono, since that'd be a little distracting at night given its placement). I know CF is overplayed, but the idea of CF floor mats is oddly really appealing. Also the Alcantara centre armrest with the Porsche crest reminds me of one of my favourite interiors (AMG GT), so was an easy decision.
K 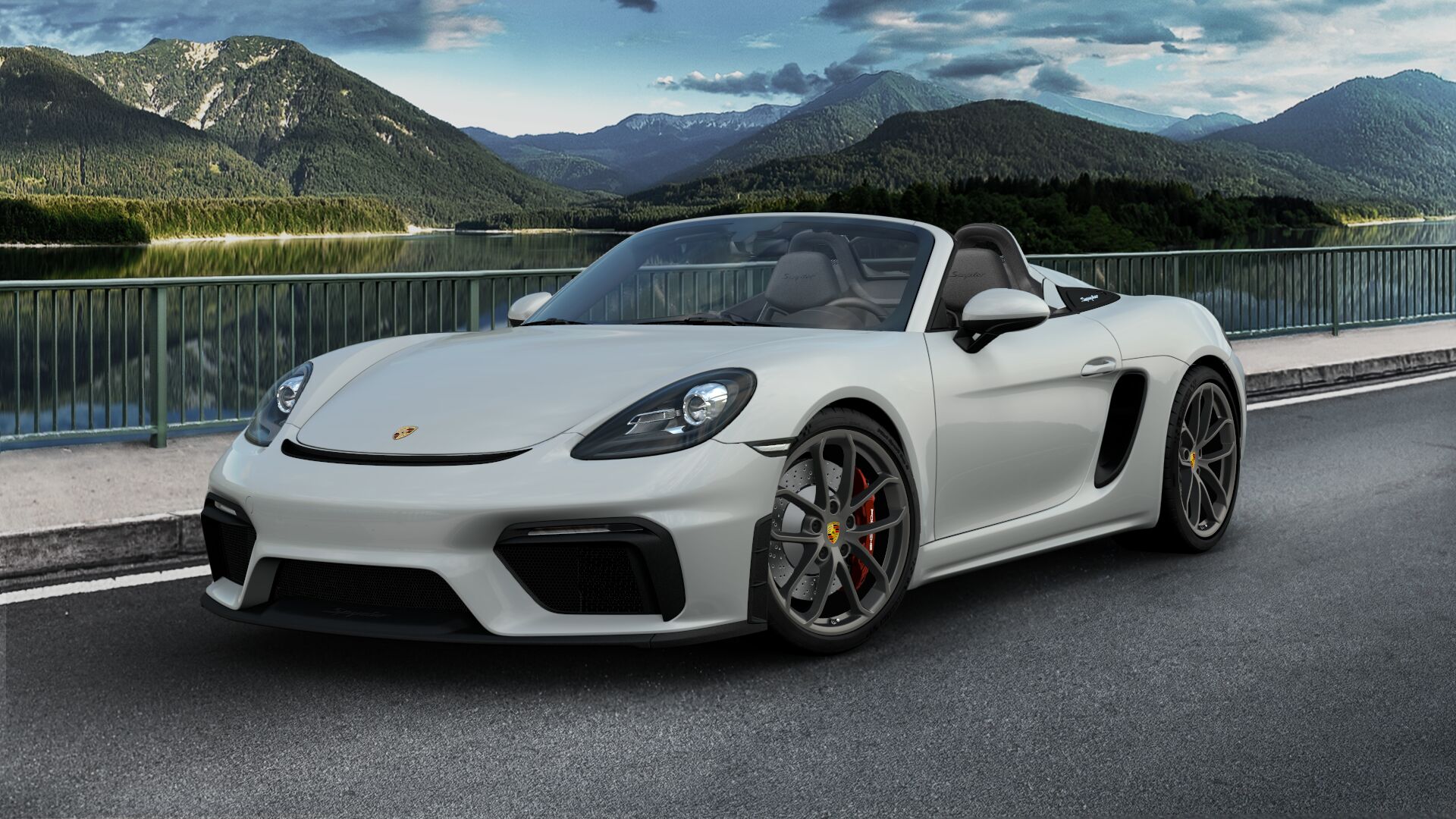 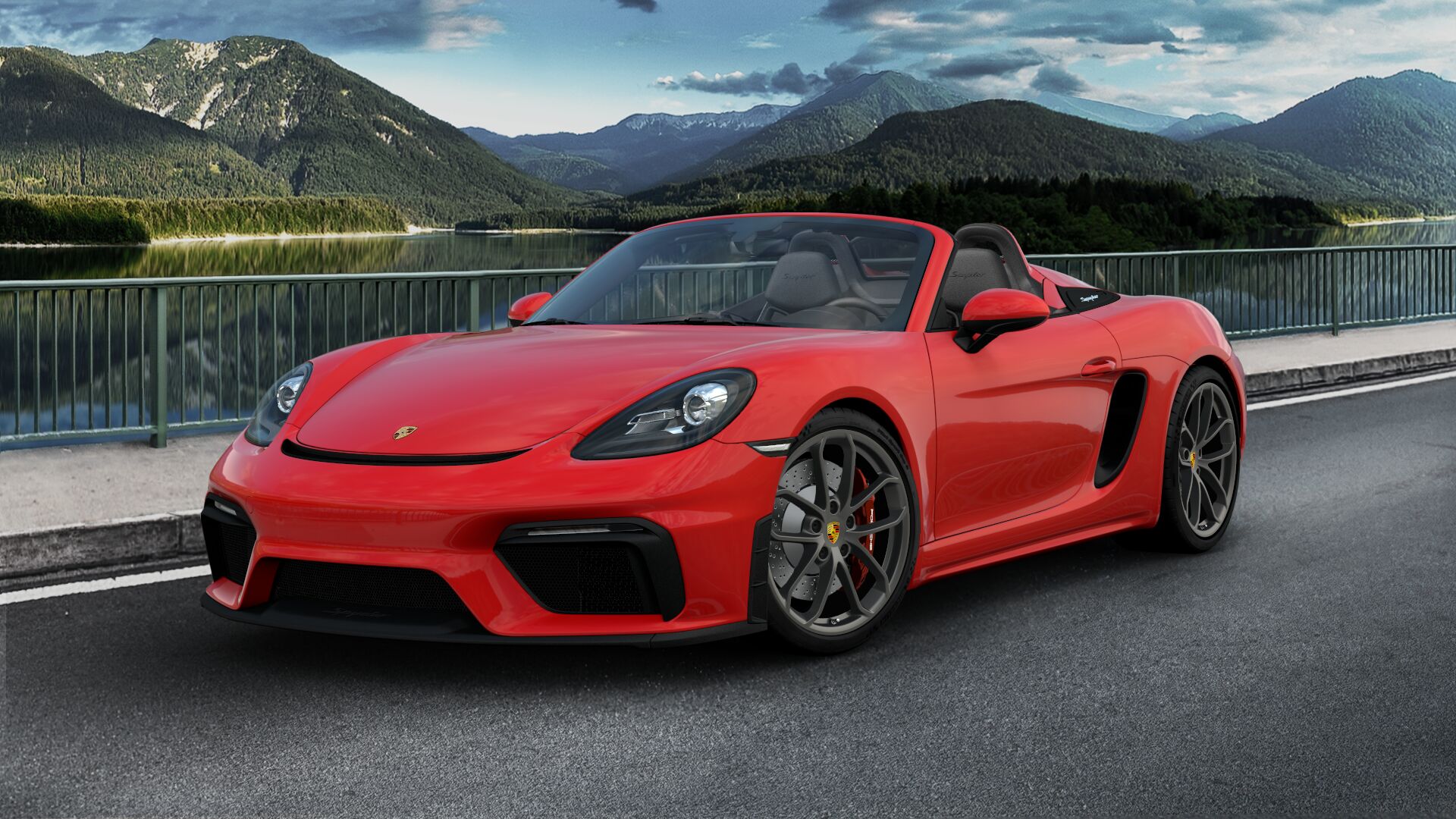 This profile looks better than the GT4 profile. 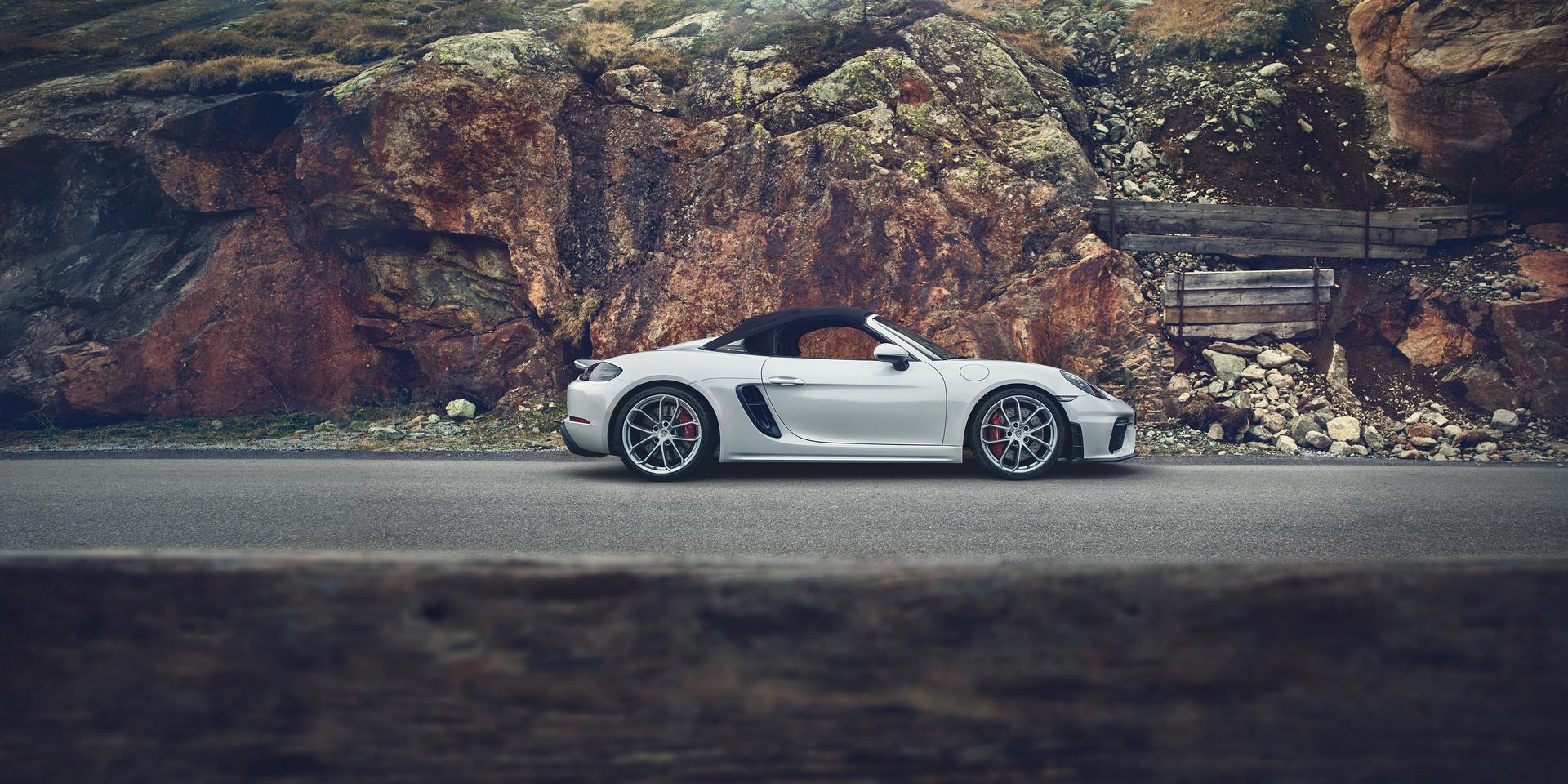