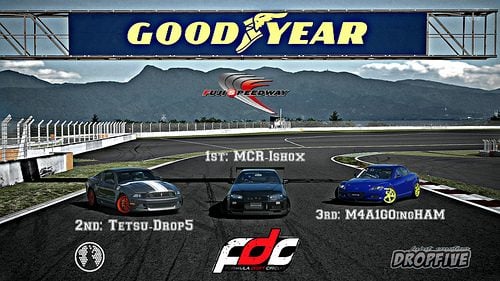 IMPORTANT!
Modded vehicles allowed. Also the following vehicles can only be used by one participant. This includes chassis swaps. All Dodge Viper SRT/ACR, Corvette C6/C7, Mazda Spirit R's, Lexus ISF. All race cars, TT cars are banned. Also any vehicle that utilizes front downforce or rear downforce above 60 is banned.

Information About Formula Drift Circuit:
The Formula Drift Circuit Championship consists of 7 scheduled events. Drivers compete in a single elimination Top 8 or Top 16 bracket depending on the amount of registered participants. Drivers individually compete head-to-head against other competitors in single elimination runs on the designated course. Competitors progress through a competition bracket and are awarded points towards the season championship. Head to head Runs are judged and scored based on a number of pre-determined criteria where the higher scoring entrant moves on to the next level of the bracket. Points are awarded based on finishing order and cumulative season points will determine the championship order.

Driver Eligibility:
Must be registered to compete in championship.

Judges:
3 Selected Judges throw Round 1 to Round 7. Two alternate judges will be selected in the
event two judges are on track at one given time.

LINE:​
The drift line is defined as the ideal path a vehicle must take on course and is marked by inner clipping points and outer clipping zones. The exact line of each track will be dictated by the judges at each track.


ITEMS THAT CONSTITUTE AN AUTOMATIC ZERO:
Spinning out
Clear and punctuated straightening or losing drift (Losing drift and reinitiating quickly is a major deduction, but not a zero. Judges will determine if an action results in a zero)
Two tires off course

ANGLE:
The maximum drift angle at which a driver can maintain and control.

SPEED:
This is used to the aggressiveness of the driver. Not quite as important in qualifying as the rest of the criteria. But each round will have a run done of overall average speeds that should be exhibited during the overall run. It will be posted with the given line video along with a track map with acceptable speed ranges thru clipping points and zones. They do not have to be exact but should be close.

Lead Car:
The lead car is to drift the course using the line, angle and style as defined by the judges for qualifying.The lead car should driver 90 percent of the time focus specifically on hitting all clipping point and zones with the maximum line, angle and style as possible. Reverse entries are highly frowned upon, in case if a lead driver executes a reverse entry and causes contact due to rapid loss of speed, they will lose advantage.
Follow Car:
The driver must follow the line the lead driver chooses, maintain consistent and larger angle than the lead car and use the vehicles power to maintain consistent and close proximity to the lead car.

Passing:
Passing is allowed anywhere on course as long as the lead car is clearly off the line the judges have specified. Any passing that occurs outside the scope of the aforementioned criteria will be deemed illegal and constitute an equivalence to a zero (0) run. A chase driver will be considered the lead driver once a legal pass has been completed and clearly shows the original chase driver has assumed control as the lead driver.

Tandem Elminations:
Three Judges will observe both runs during a head-to-head battle.At the conclusion of the head to head battle each judge will individually declare a winner.*

*At any point you lag out during your tandem runs, you will get to minutes to get back in the lobby. If you fail to do so your opponent will advance.

Team Championship info:
After some discussion there will bee a team championship. Your team can only be comprised of 3 members. Team Points are based of the drivers finishing out come and the 3 will be combined. Qualifying Points are not included.

* Qualifying room- The Friday night qualifying session is prodominatly for the US people, with the Saturday Afternoon session for the Euro guys.*

Quenteen, u dont see sign ups arent up yet bro.

There is a signup link in the OP

hmm let me think. the times tho

@ghostthief980 @motsflots @DuhHero it'll be great to compete in something you don't have to maintain.

This is gonna be the best season yet. @LVracerGT We miss you!

Ill think about it.

He's not there to manage it I guess

Yes! I think so

There isnt a reason to be scared.. I'll pulling out the Madness.

fastfox400
There isnt a reason to be scared.. I'll pulling out the Madness.
Click to expand...

I REALLY wanna see your r34 in person

I REALLY wanna see your r34 in person
Click to expand...

Nope but I'll torque for days tho..

fastfox400
Nope but I'll torque for days tho..
Click to expand...

Ewwwweeeewwww too little grip, too much wheel spin

MRDEVIL
Ewwwweeeewwww too little grip, too much wheel spin
Click to expand...

thats what you think..

I REALLY wanna see your r34 in person
Click to expand...

Its actually not quick. Is probably as grippy as the supra.

Isho
Its actually not quick. Is probably as grippy as the supra.
Click to expand...