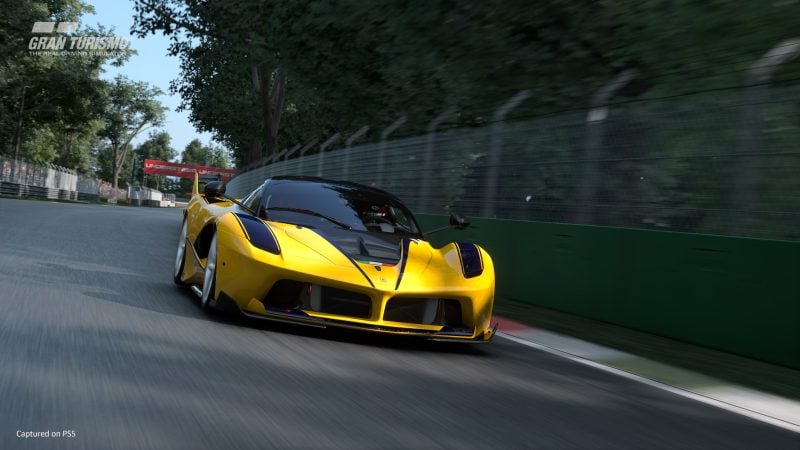 A new update has arrived for Gran Turismo 7, largely aimed at addressing a number of early bugs and glitches as well as adding a broadcast mode...

Other Improvements and Adjustments
1. Car Settings

2. Lobby
- Fixed an issue wherein some Assist Settings, such as Auto-Drive, were able to be changed or saved even when 'Limit Driving Options' was set to 'Prohibited.'

3. Missions & Licences
- Fixed an issue wherein the modified Assist Settings in some events would be saved and would not go back to the default value even after leaving the event.

4. Missions
- Fixed an issue wherein for some events the wind direction and speed display were set to 0.

5. Licences / Missions / Circuit Experiences
- Fixed an issue wherein the specified tyres would not be equipped on the vehicle for the following events:

6. World Circuits
- Adjusted the rewards for events inside 'World Circuits' according to driving time and difficulty. The adjusted events are as follows:

8. Garage
- Fixed an issue wherein on rare occasions an application error would occur when purchasing cars from 'Brand Central', 'Used Cars', and ‘Legendary Cars', or when receiving a car as a prize.

9. Physics Simulation Model
- Adjusted the model to reduce the grip lost when cars with high downforce are passing over a kerbstone while cornering at its limit.

- Various other issues have been addressed.
Click to expand...

Broadcast Mode
Update 1.07 released on Thursday, 17 March introduced the ability to select a 'Broadcast Mode' for the game.

When streaming gameplay footage of 'Gran Turismo 7' on YouTube, enabling Broadcast Mode will remove all music tracks that could potentially trigger a copyrights infringement notice from the game’s BGM playlist.

Please note that while Broadcast Mode is enabled, some of the Music Rally or Music Replay tracks will not be available.

Players who still receive copyrights infringement notices from YouTube after enabling 'Broadcast Mode' are encouraged to report it to us by using the following form: https://forms.office.com/r/DzhdSQc3yx

We apologise for any inconvenience caused.
Click to expand...

I can't understand a game that is focused on collecting cars, making it harder and harder to make money to collect them.

Lukanyon
I can't understand a game that is focused on collecting cars, making it harder and harder to make money to collect them.
Click to expand...

Ah. So they're literally doing a GTA V and patching legit money-making methods. As if there was any doubt before, PD are literally just treating us like cash-fisted idiots now. I've always loved the GT series and I haven't ever been put off by some of the more questionable decisions made by PD, but this is blatantly anti-consumer and there's no other way to spin it. All the people saying PD will add seasonal events with better payouts will be damn scared now.
Last edited: Mar 17, 2022
T

Have they added Touristenfahrten in online mode yet? 🥱
O

This update clarified Polyphony's attitude towards microtransaction. I'm so disappointed.

wowbaggerBR
I can. The goal is not to sell you a game, is to sell you a service where you have to buy credits with real money.
Click to expand...

I don't mind a Pay2Win game as long as it's Free2Play. Sadly in this case it's not...

wowbaggerBR
I can. The goal is not to sell you a game, is to sell you a service where you have to buy credits with real money.
Click to expand...

Yeeeep. Here's what the new payouts apparently look like:

Here's a chart showing all the events and the change in payouts from pre-1.07 to post-1.07.

It goes well more than just being a "nerfing Fisherman's Ranch" situation. Its a pretty dire situation altogether.

As people can see, only two events got a substantial increase in payout. The rest, including Fisherman's Ranch, have anywhere from a 30% to (if my math is correct) 65% decrease in money earned.

This was my biggest concern when PD announced the dynamic pricing in the Hagerty dealer, because it was basically PD saying that they would be adjusting the economy over time, in a game that already had an economy geared towards MTX purchases as if it was a free-to-play game.

PD once again showing that they are totally out-of-touch with their community. The cynic in me is expecting some of the upcoming LCD cars to be among the most expensive cars in the game after the update.
Last edited: Mar 17, 2022

I'm going back to GT Sport. Better career mode, better availability of cars, practically the same tracks. It just sucks I have to redownload all the patches, but even that will be better to sit through than repeating the same events over and over, earning absolutely nothing, trying to save up for cars that aren't even that expensive at all.

At this point, even though I would rather not have spent any money at all on this game, I'm glad I bought the cheapest possible version.

Was also planning on double-dipping, should a PC port arrive later. Now, it's out of the question.

First the always-online requirement being extended to the point where you can't even continue playing, should your connection drop, and now this.

It's clear where their priorities lie, and I'm done. I'm off to PC and I hope the Forza Motorsport reboot is amazing, and rips this game a new one.
Last edited: Mar 17, 2022

When people mention boycotting I usually roll my eyes but something absolutely needs to be done about this. They cannot be allowed to get away with it.

tzagorski
Have they added Touristenfahrten in online mode yet? 🥱
Click to expand...

Yep. And you have to pay €24 in real money per lap

MSkovmose
I don't mind a Pay2Win game as long as it's Free2Play. Sadly in this case it's not...

It heavely try to make you buy currency but it's TOTALLY false to call it a pay2win game. You dont need to pay to win, you need skill. If you do all single content now you sit on enough money (around 4-5 million) to tune 3 cars for all 3 sports mode race and win with it if you are good enough. You dont need any money to finish any mission, challenge or licence either. So again, not pay2win.

Pay to collect if you want, but def. not pay2win.

I dont discuss it's scummy act from PD, especially since this still feel like a reskin gts with less content rather than anyhting new. Sometimes when I'm in some menu I even wonder if I'm still in GTS or if I'm really playing a new game. And it shouldnt happen. GT7 feels like GT6 felt to GT5 to me, which is a downgrade of the same game with slightly modified stuff.
Last edited: Mar 17, 2022
S

I can’t connect online receiving error message CE-210701 after the update. Anyone else with the same problem?

" Please note that while Broadcast Mode is enabled, some of the Music Rally or Music Replay tracks will not be available."

What's the point of broadcasting music rally if you can't watch it with its background music on? And I don't get this copyright issue, if PD secured license for the music, and you paid for the game that contains the music and stream it online (to people who didn't pay for any of that), how come only music is problematic, not the game as well? By some logic, none of that should be a problem or both.

And this prize cut move is atrocious, won't even comment on that.

Hi guys!! Im new here... Lobby stills trash??? Without way to save a configuration for easy montage of race later?? And the qualify, any news, when they will be able to be configured in a lobby??

Changing the rewards to prevent players from grinding for money is the breaking point for me, I'll be cleaning up a few trophies and I'm done with this game.

Heff you Sony. This just solidified my position on never giving you another dime for this game.
Last edited: Mar 17, 2022

lbpomg95
When people mention boycotting I usually roll my eyes but something absolutely needs to be done about this. They cannot be allowed to get away with it.
Click to expand...

It's barely even boycotting at this point, the game is genuinely not worth playing. If you want to earn any credits at all (to buy cars, which has explicitly been called an important thing to do in the game) the best strategy is to not play the game and instead earn money in real life.

It's a game that's best played by not playing it at all.

Get your credit cards, boiz (don't).

Also, when PD will address a very annoying bug of a game being literally unplayable when servers are down?
F

Playstation, For The Grinders.

I hope that the new Forza is coming soon, I like to race and not to grind.
C

scooterlord
I can’t connect online receiving error message CE-210701 after the update. Anyone else with the same problem?
Click to expand...

I get the Same thing.

Those payout changes are absolutely disgraceful.

I wanted to give PD the benefit of the doubt here since I am swooned by that classic GT allure, but this is just gross.

tzagorski
Have they added Touristenfahrten in online mode yet? 🥱
Click to expand...