Every time I see this thread I get excited that Infiniti has reentered the luxobarge segment with something big and awesome with a 5.0 V8. And then I'm disappointed.

I'd still own one of these cars. I'd take the badge off.
M 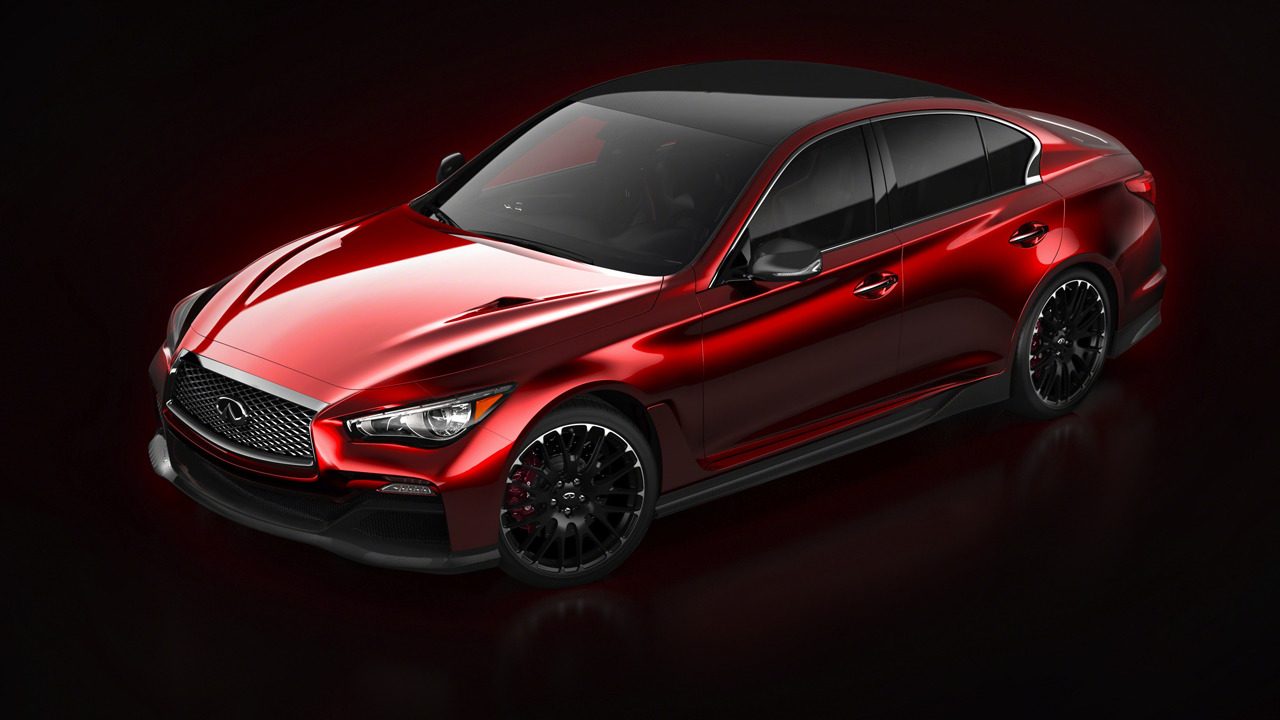 Hong Kong - Infiniti has revealed the first image of the Q50 Eau Rouge concept which will have its world premiere at the 2014 North American International Auto Show in Detroit on January 13.

Major bodywork components have been redesigned with aerodynamics in mind and manufactured carbon fiber. Q50 Eau Rouge is lower and wider - only the roof and door profiles remain unchanged from the production Q50. This striking design is inspired by muscularity, refinement, and understated performance intent.

"From our shared passion for performance with Infiniti Red Bull Racing grew a collective desire to produce a vision of what a high-performance Infiniti Q50 could look like," said Albaisa.

"The design has a number of distinctive Formula One inspired touches. In particular, the sculpted front wing assembly and the rear aerodynamic packaging take their cues from the RB9 race car," added Albaisa.

Infiniti is also empowering social fans to unveil the all-new Q50 Eau Rouge concept car ahead of the official launch at the Detroit Motor Show on January 13. Starting from today, online advocates can drive the reveal of Infiniti's latest concept car. By sharing their views and comments through social media channels like Twitter (hashtag #F1Q50), Facebook and Weibo, fans will build the image of the concept in a virtual garage. Each "share" will help build individual Q50 components, and as more fans share, the quicker the car will be "built." Progress can be viewed on unveil.infiniti.com.

More information about the Q50 Eau Rouge will be revealed during a press conference at the North American International Auto Show at 9:20 a.m. ET on January 14.

This article made abso-***-lutely no sense when I read it.

We should be taking bets as to how long Infiniti will go for this naming scheme before dropping. You know, after sales fall off a cliff because no one knows what car they're looking for.

The engine under the hood of the Eau Rouge is...... 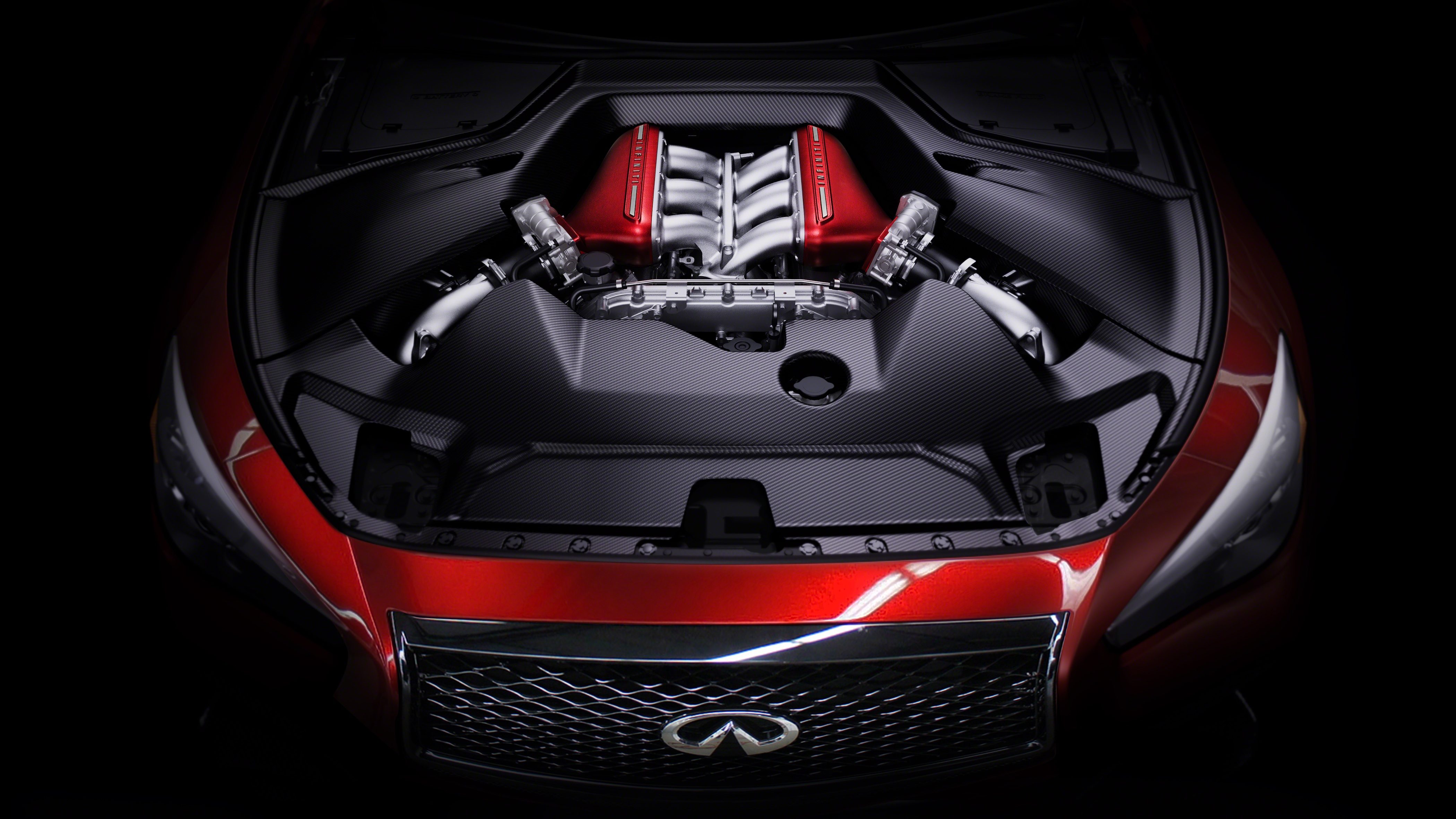 Yep, definitely a VR38DETT (intake plenum). Has it been confirmed as being a VR38? I see no nameplate on the engine though. They guys at the plant are going to have fun building the extra engines. Have they announced how many will be produced yet?

Way to go Nissan. No more exclusivity with the GT-R. Milk it.

yes its confirmed and it also has like what was stated 560hp which is 15 more than the non nismo. It obviously wont be near as fast but its more the principle of the matter. This is the first time Nissan has officially ( Juke R was a side project) shared the engine across platforms.

but 6-7 years in I guess it was inevitable especially with the departure of chief engineer Mizuno-San. I doubt he would have let that happen if he could have helped it. But then on the other hand he was against the NISMO so go figure

As for the name plate since the R35 first came out only 4 people have built the engines but they've only been doing the nameplate thing since last year. My guess is since the nameplate carries the GTR branding they left it off
Last edited: Mar 4, 2014

Honestly... Infiniti sucks for doing this to us.

I like how a lot of people are getting excited this may be more of an affordable version of the GT-R. I'd be really surprised if that thing is under 90k, way out of most peoples ranges.

I don't see a problem with extending the engine sharing to Infiniti... helps defray costs.

I also doubt this will be a significant performance bargain. It's a super sedan. I expect it to sticker in the 70-90k range, alongside other super sedans.

I wonder when we're going to see the 'Ring time and the inevitable Porsche blow-up that follows.

Looking at the price of the FX Vettel edition, I doubt Infiniti is going to price it under 100k.

It's hard to get excited because it's a concept & the engine could change at any time. It does have a new powertrain, though. From what I read, it has a 7-speed transmission like the GT-R, but it's not a DCT.

The price is going to be a first for Infiniti, easily. A fully loaded Q50S AWD retails for close to $60,000. If this keeps the GT-R powerplant, I could see Infiniti charging $15-20K alone for that motor; that's 230 extras horses over the standard 328.

DCT would be completely unsuited to such a product, anyway. For a big, fat, powerful sedan, I want a traditional automatic for smoother shifts and lots of torque-braking goodness for launches, and a locking clutch for cruising. Nothing else.

The powertrain in the Q50 is not new. The 7 speed auto (also found in the 370z) is dated, but it gets the job done. The GR6 unit in the GT-R is a 6 speed, and if you look at the structure of a GR6 unit, you'll notice that it is a purposely built transaxel (not like a 6l80e unit). No chance of it being in the Eau Rouge.

Didn't even realize Infiniti is using their stupid nomenclature on the RB... 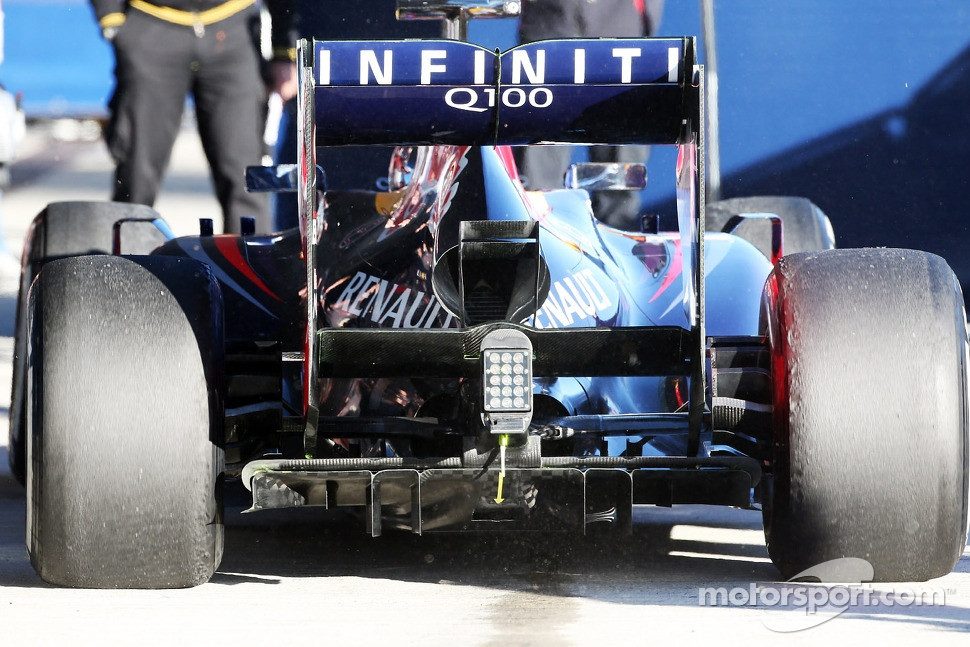 I'll just put this here instead of a new thread.

The 3.0-liter biturbo will be offered in two different states of tune. Enthusiasts will flock towards the aforementioned 400-hp model, but the first VR series engine will also be sold in a 300-hp version, as well. Regardless of output, both engines have a very broad torque curve, ranging from 1,600 to 5,200 rpm with either 350 or 295 pound-feet. A Mercedes-sourced, 2.0-liter, turbocharged four-cylinder will serve as the Q50's new base engine, matching the CLA250's 208 hp and 258 lb-ft of torque.
Click to expand... 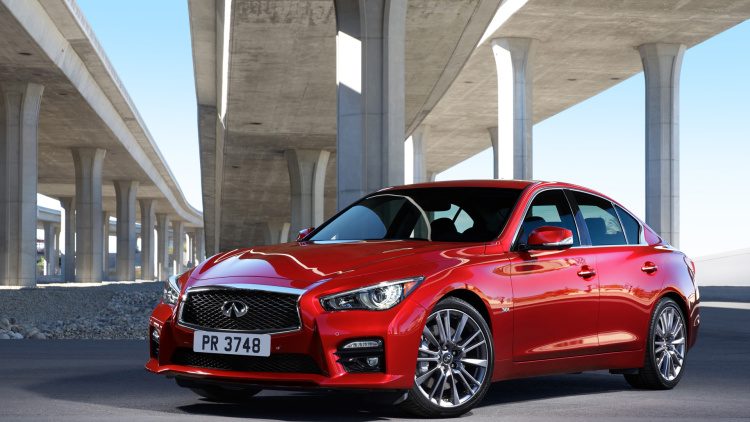 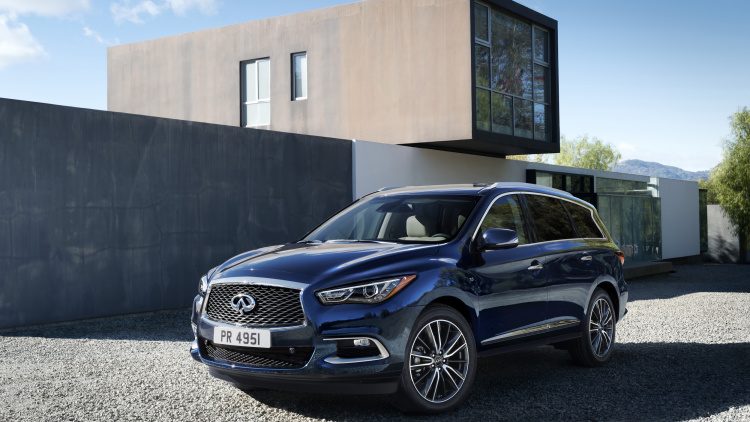 Since it's nearing the power range, does this mean that the TT V6 can possibly replace the VK56VD?

R1600Turbo
I'll just put this here instead of a new thread.

Is this trying to compete with a an MB GL? I wonder if Infiniti owners are looking at those Hyundai/Kia X-overs and new CX-9. Then, today's drivers in these cars, only care about the features.
R

Grandea GTR
Since it's nearing the power range, does this mean that the TT V6 can possibly replace the VK56VD?
Click to expand...

You talking about in the Q70? (former M56) I wouldn't be surprised. That car is due for a new generation soon, so probably not until the all new car.

MCNAGTROC
joining the VR family is interesting as its going to be the eventual basic engine in the R36 before the added hybrid power
Click to expand...

Kind of figured that.

05XR8
Is this trying to compete with a an MB GL? I wonder if Infiniti owners are looking at those Hyundai/Kia X-overs and new CX-9. Then, today's drivers in these cars, only care about the features.
Click to expand...

Well the Pathfinder competitors are Durango, Pilot, etc. Not sure for the QX60. 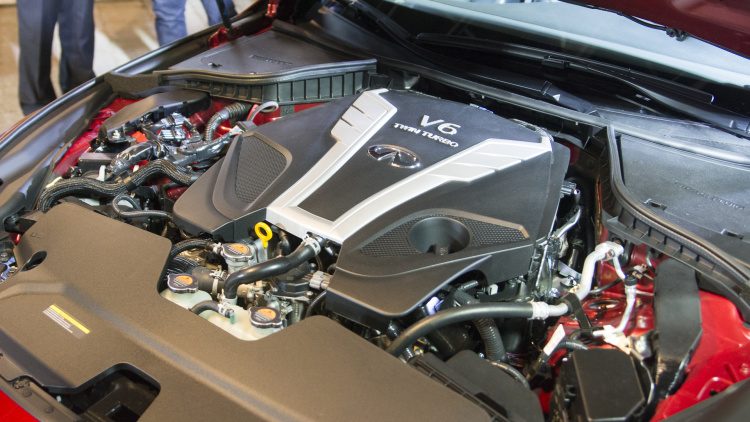 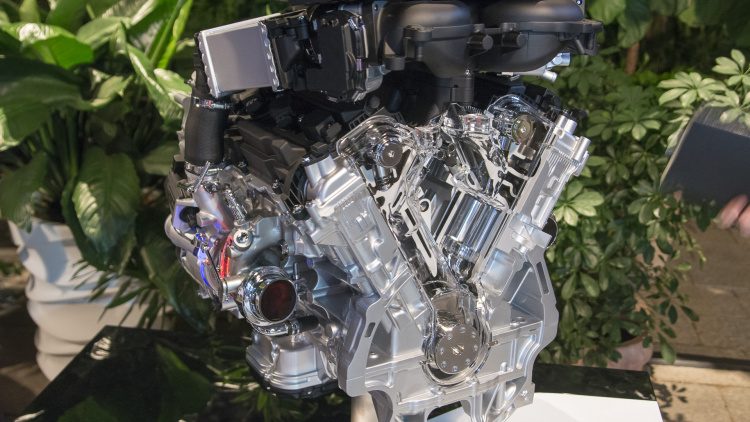 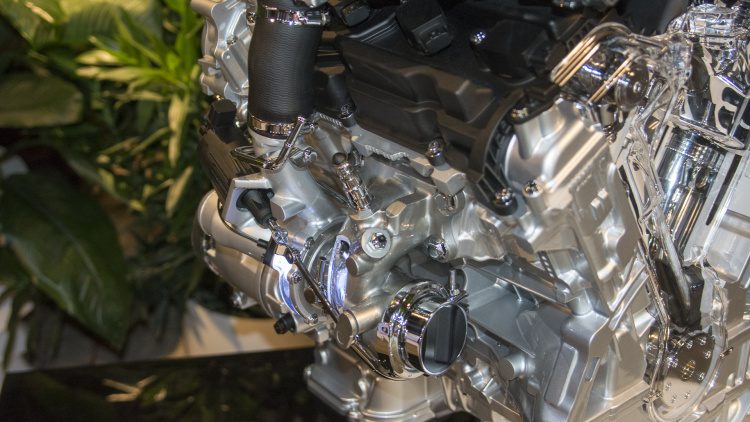 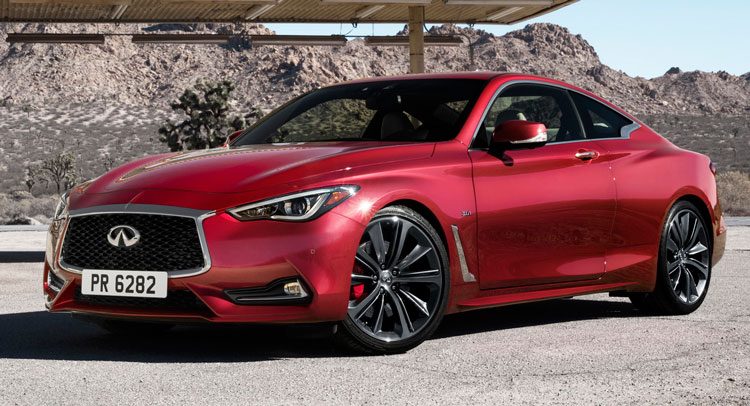 It looks good but the fender vent looks like stuck on aftermarket vent.

That is just turrible.