The thread was invented for this:

Seat's at Brands. Watch how close the marshal gets. Those guys and girls are legends.


HUUUUUUUUGE accident. One of the biggest I have seen. Driver completely unharmed. 02:25 for the slow-mo carnage.

Just came across this:


Yea, watch back before you open the door!

What makes this one more "OMG" is the fact he went on to win the next race only an hour or so later in the exact same car...dent still in the roof and all!

And how about some typical Snetterton carnage?

^ That "thread the needle" move wasn't such a great idea...but it is Touring Car racing.

EDIT: How about some team killing:

You mean Warren Hughes in the 2003 video? Yeah, though you can see why he tried it, its just unfortunate that Turkington decided to turn in to pressure Chilton. I'd probably blame Turkington for that one for not noticing but eh, racing incident.

Paul2448
The wreck is pretty cool, but skip to 4:15 for the really amazing part.

Sorry but whats the "amazing" part about a spectator being hit by a part coming of one of the cars??...

Or do you mean the fact they try to put the car back into the race held together by gaffertape?...

Ahh Snetteron. That 1993 clip reminds me of the days I used to watch Clelland, Soper, Winkelhock, Radisich, Hoy etc duking out it. Good times.
S

A good way to ruin your chances of winning:


That one cost Milner a 60 second penalty.

This really makes me say OMG (at least for me, I don't know for others) for the last lap before the race went to red flag; seeing the Falken Porsche tip-toe past as competitors spin out and go wide into dirt. It made me stand up and look in awe as chaos ensued, as someone waded the storm and took the win.
S

Remember when Corvette ran their GT1 cars? Back then, they didn't need Porsches or BMWs to knock each other around:


And Luke Hines crash that ended the race at Mosport. (Do to the guardrail being beyond immediate repair:

F1 fan
No worries. I know you would at least make an effort. Was just thinking of the people who would naively post something thinking they were the first people in the world to see something.

Do you share an internet connection by any chance? I did a while ago and was trying to watch live F1 and my flatmate was torrenting a billion things in preparation for her holidays.

I think my problems were a result of hitting our monthly download limit. The fair use policy allows me to have some usage, but at pathetic speeds. Our speeds aren't that great at the best of times, and i'm the only one using it as nobody else in the house has a working computer since my Brother moved out. It seems to have sped up since last week so presumably around the start of the month our limit is reset. By the time it runs out I should be back at uni

Living in student accomodation during term time, I know how bad sharing a connection can be when your flatmates are torrenting or downloading games on steam etc.

This could have been catastrophic is the truck was a couple of seconds later...

Any closer than this is too close:

When this wreck happened live, I thought Larry Pearson and/or Charlie Glotzbach had died:

RVDNuT374
When this wreck happened live, I thought Larry Pearson and/or Charlie Glotzbach had died:
Click to expand...

Very scary. Probably the most dangerous aspect of Oval racing. Fair enough, T-boning can happen in any form of Motorsport, but due to the constant high speeds and lack of runoff in an oval, it is a bigger threat.


Play a sad trombone for Nigel...


...especially when it came to light his "electrical failure" was due to hitting the ignition switch with one-half lap to go.

The Omnitel 1000km race in Lithuania:

Friendly tip: Put on the Benny Hill Theme while watching this.

As a matter of fact, here it is!

ghskilla
Friendly tip: Put on the Benny Hill Theme while watching this.

As a matter of fact, here it is!
Click to expand...

Great combination that was the first thing I thought about the first time I saw that vid, but never combined the two.

You've earned yourself a combo bonus.

If you notice, these are both the same guy.

Wonder what he thought the second time it happened? "Again? WTF are the odds???"

And the onboard camera still works! 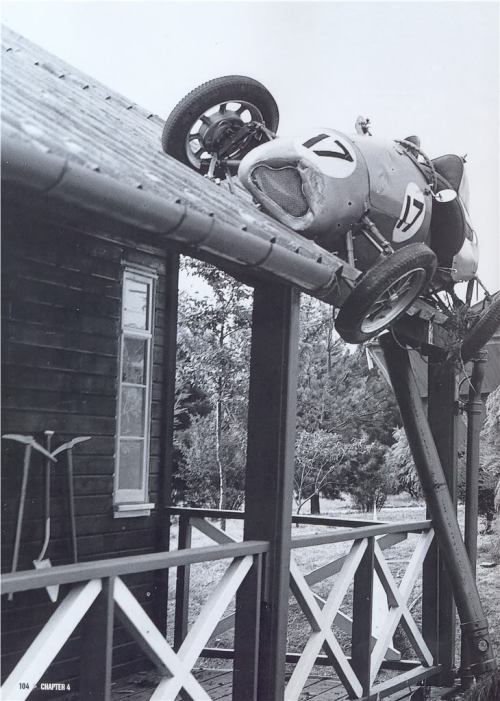 &#8221;Formula 3, Blandford, August 1949: Major Peter Braid was the man in command in this famous accident when competing in his F3 Cooper. You&#8217;d have thought that his military intelligence would have helped him know where he was going, especially as the circuit was laid out around an army camp.

As it was, he got it wrong, very wrong running over the crest at Engineers bend, the fastest corner on the circuit, ending up with his Cooper perched atop the roof of the guardroom, having hit a bus stop and a small tree between leaving the track and reaching his unintended destination.&#8221;
Click to expand...

The driver walked away. Well, climbed down away. Look here for some understanding of how he got there.

The Year in Motorsports 2018

The Year in Motorsports 2015