Thanks, is still makes me happy that somehow there is a more less alive community, maybe im going to use this thread to review the mod cars and put gameplay for the patch like this one

Well and since for now the progress in the mods are going to be slow, and because of this im going to review the mods now, instead of the vanilla cars.
Now the first issue with the mod was the balance, since sms ****ed up extremely badly with the low ip cars the d class was left empty, seriously the highest rating cars of the mod know are the scion tc, corolla ae86 and rx7 fc na.
So even before than adapting the ferrari addon or something like that, i had to put some econo-cars (or how i like to call it sh17 boxes) to fill the void, that said there is still a void but for now it can do, and im going to review it form worst to best.
So with that intro, lets go in this mental-taxing review
PS. All the stats im going to talk are the game stats i made, not irl ones and im going to use metric
Last edited: May 21, 2021 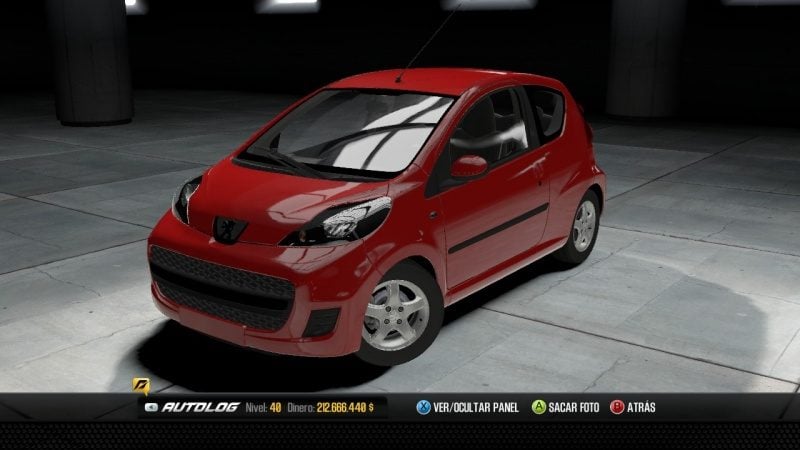 For some reason i cannot comprehend, some dev said, "yeah it a good idea to put the slowest modern car in a racing game" and then a modder decided that the car was good enough to export it to shift.
The car is slow, it reaches 0 to 100km in 18 sec and 0 to 100 mi in NO
This thing is slower than the mini and that is something impressive in its own way
There is not much it can said in lower ip, the car is light and has no power, as all the other cars, but this one has even less power so is exrtremely useless is any track that has a straight longer than 200m and/or an uphill so.... here it is a photo of me losing to a yaris in downhill 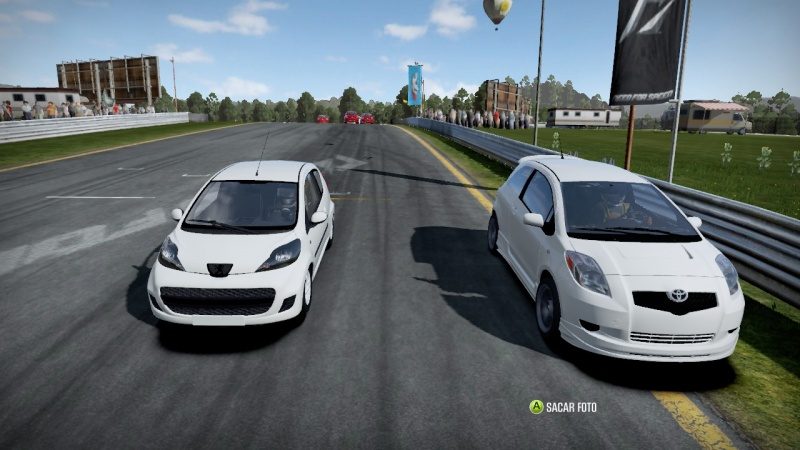 Now there is no works modification so it stays in level 4 (all level 3 upgrades installed).
Here all it weakness can made some strength, obviously is still going to lose with similar cars, but now it can battle.
The car barely loses weight, but go from 93nm to 346nm and from 67 hp to 260hp, putting it in the border of the b class.
The car is surprisingly stable, and with a little bit of control you can powerslide to make high speed turns 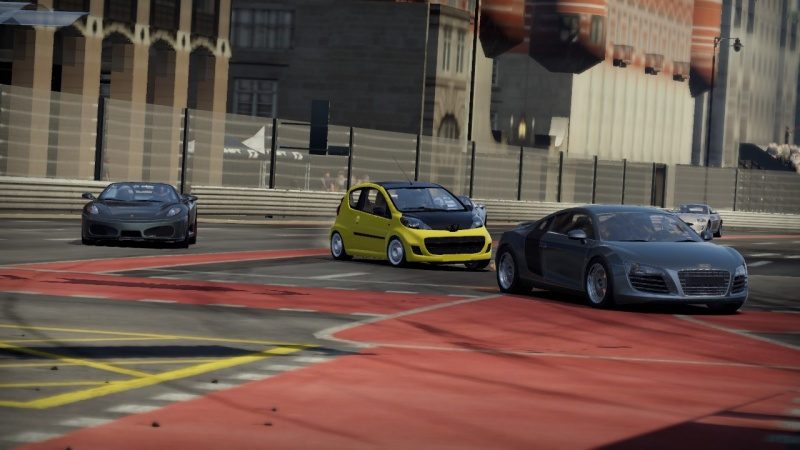 Now lets remember that this is still a 107 so the top speed is awful and the acceleration is no better, but thanks to the lightness compared with basically everything else you can brake extremely late and the small size makes it very nimble.
I think it the only thing i can said abou this car, and for now is a very bad car, maybe when i add the kei cars it can be comparatively better but for now, it is what it is 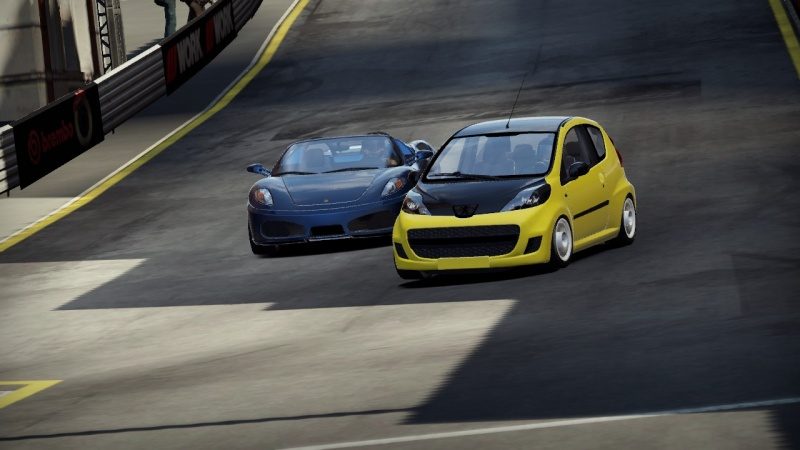 Here im surpassing a ferrari on the outside, going to podium 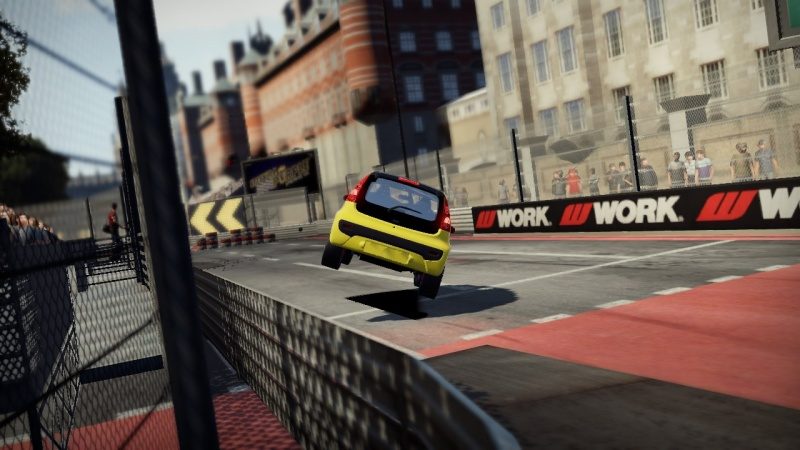 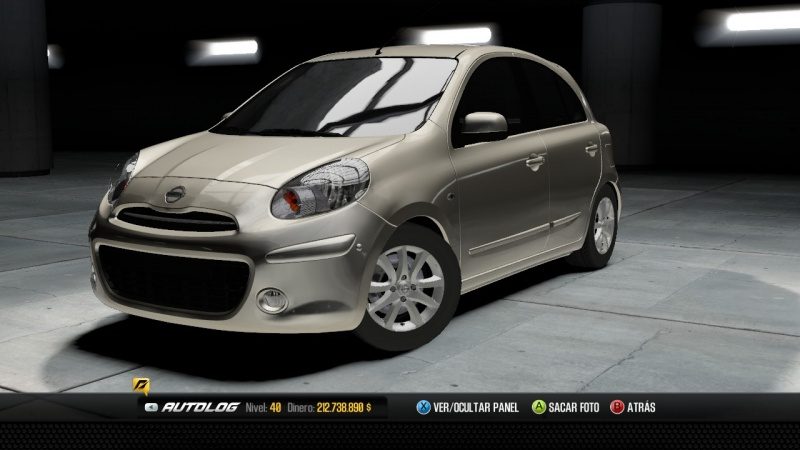 Usually when i made the stats, i have to search some aspects in the car to make the stats of the cars, specially the engine, weight and suspension,this one is the same as the 107, a ridiculous idea for a car and all of that is because this badge.

Searching the car info i got that this particular badge was made for their eco-friendly cars, so this means than instead of having a normal 4 cyl. engine, it has a supercharged 3 cyl. engine with 140 nm and less than a 100 bhp, its better than the 107, but not for a long shot 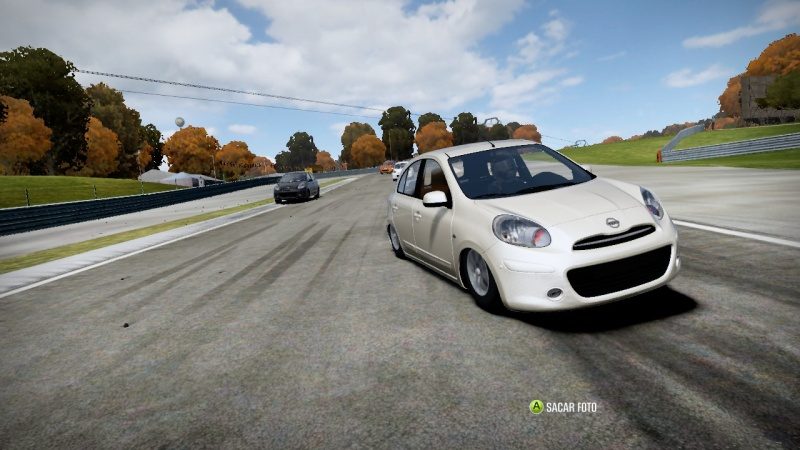 The car has a super soft suspension and is slow as heck, the 4th feels like a funeral and i never reach a good spot to put 5th, on all the compact ****boxes this is the worst, and i put a older yaris, so again, impressive 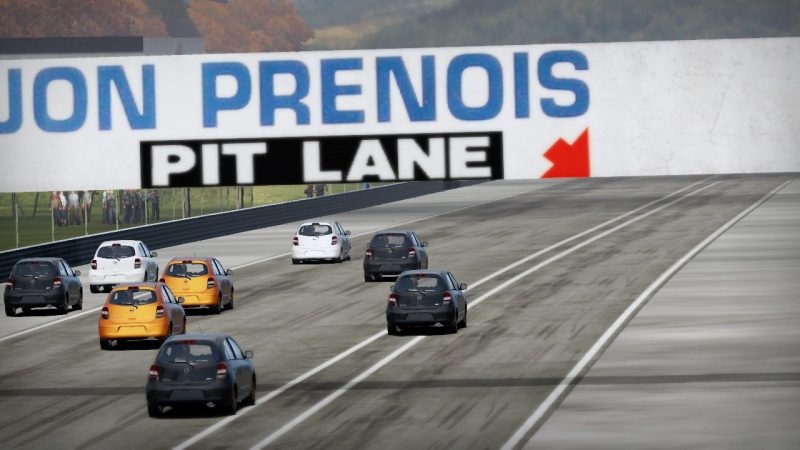 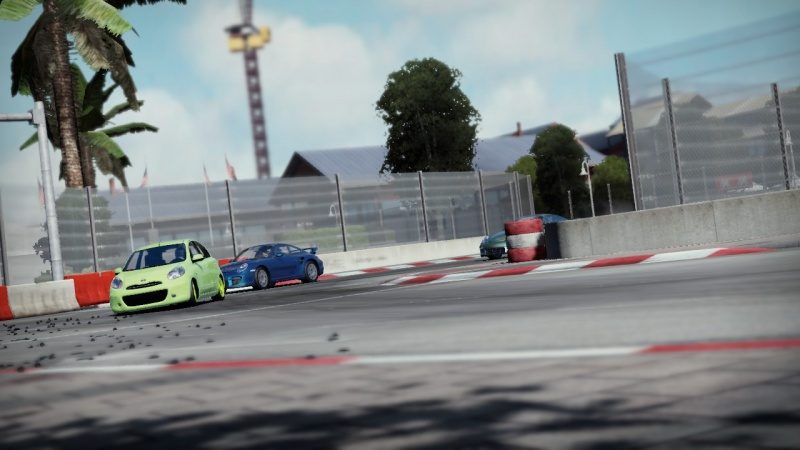 The level 4 car is a little bit better, like all the cars in this segments by the end of upgrades are lightweight nimble cars with no power, in this case the car thanks to a lot of initial torque has a "regular" acceleration, but thanks to the suspension the car can feel too nervous sometimes and because of a horrible weight distribution the car can lift up during braking, and can roll over if you hit too hard the curbs, so be careful about that. 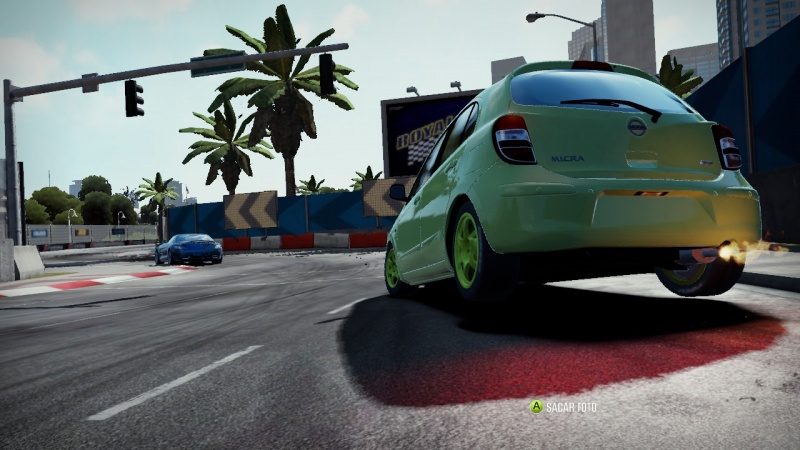 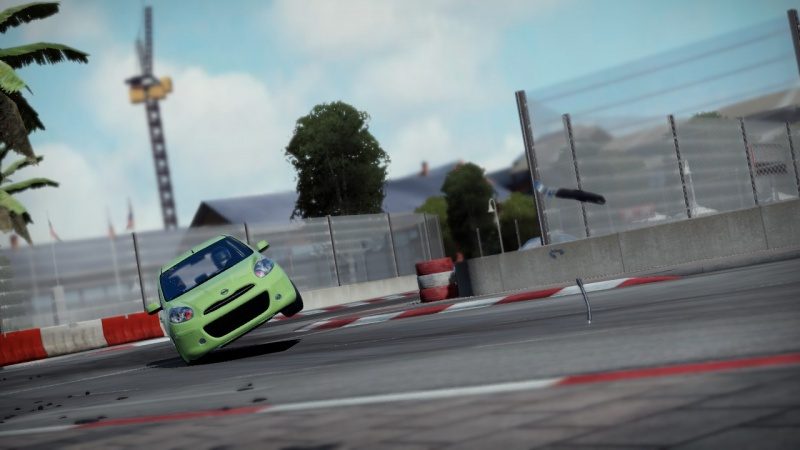 Finally the car has a works upgrade, it is no much better than the lvl 4 car, the main benefit is that with aero the car feels more planted to the ground, but in the level of the car you will need a very good throttle control and weight transfer kowledge to be competitive in that level, so if youre a masochist (because there are wayyyyy better options in that level) go ahead and race with this thing against hypercars


In conclusion, the car is no good, is only a filler to have some competition so if you want to race and suffer a while use it
Last edited: May 26, 2021 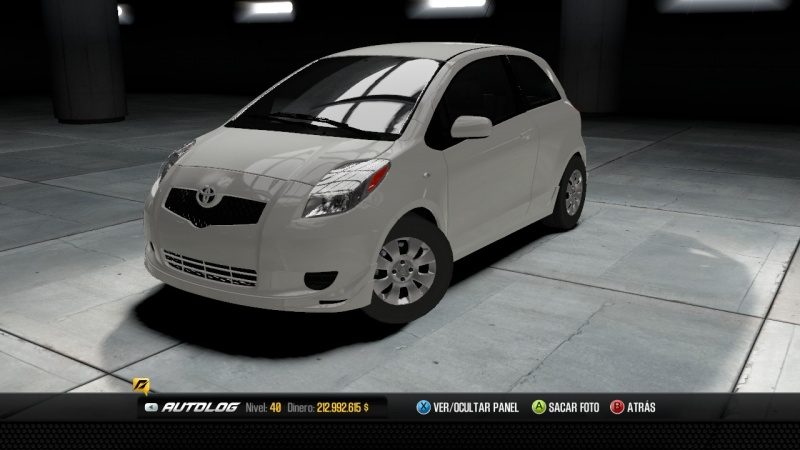 This one was the opposite case with the micra and in this case was the S version, with in practical effects are a couple of "aggressive" plastics and 107 hp, it has the same torque as the micra, but those 10 horses make a difference, but in the end is still a yaris. 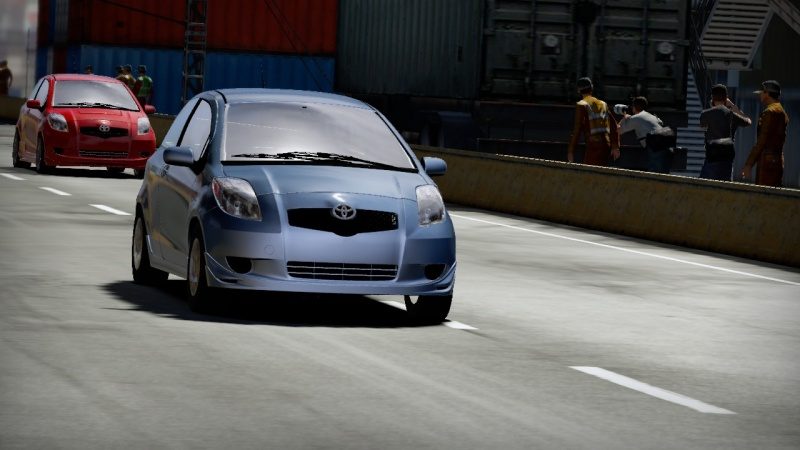 The car is boring as hell, but the main benefit of the car is that you can punish the engine so you can make very aggressive engine braking without worrying (too much) about the engine, again the maximum gear you're going to use is the 4th one 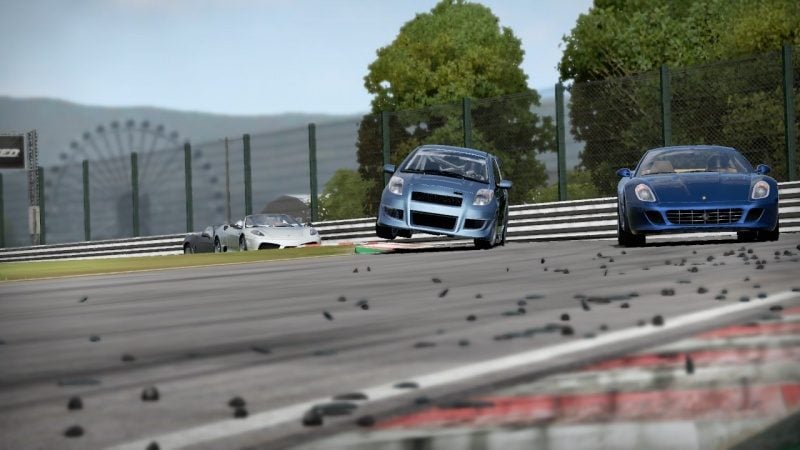 Now, level 4, the same advise of the micra can be applied here, but thanks of this car having a aero kit in this level the car has better stability, you can push the car more making more direct attacks in the turns, and you will need that because this car feels slower compared with the opponents. 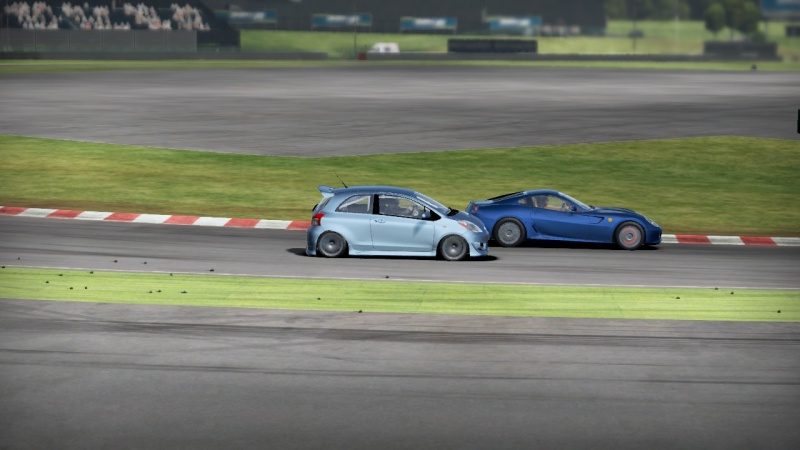 And finally the works upgrade, here the car becomes the 2nd most powerful ca of the pack, only behind the fit, and ties in 2nd place (again with the fit) in stability, only losing vs the mazda 2, making one of the best car of the group, now with all that said there is a... curious aspect of this car.
Because of the range it has the ip matches with the GT500, challenger and charger works, and for now in mods with the fxx as well, so in the works events you're going to fight vs those cars, and being lighter that a ping pong ball you're going to "love" that
So if you're bold enough and hate yourself this is the car to go

I already plan on testing two mods with this patch:

RPR6143 RPG
I already plan on testing two mods with this patch:

Unfortunately no, the amount of things changed means that all mods are incompatible for now, in the patch 1.2 + mods thread i have a list with all the compatible mods for now

Railgun
Unfortunately no, the amount of things changed means that all mods are incompatible for now, in the patch 1.2 + mods thread i have a list with all the compatible mods for now
Click to expand...

J
I need to install all the patches?