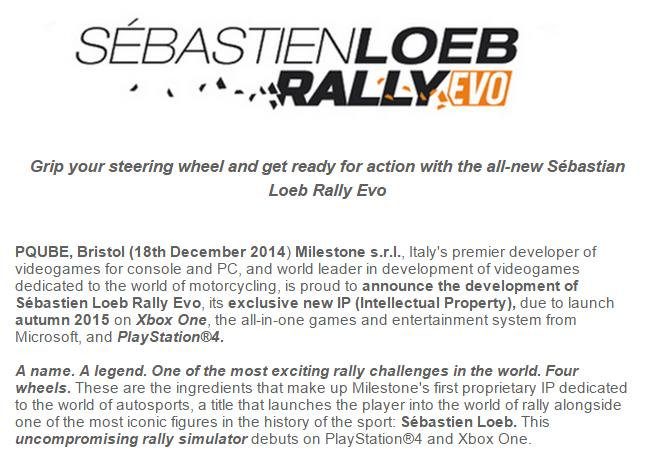 PQube has announced Sebastien Loeb Rally Evo, a new rally simulator in development at Milestone coming to PlayStation 4 and Xbox One in autumn 2015.

Sebastien Loeb Rally promises to be an "uncompromising rally simulator" that delivers "all the thrills of the world of rally", and features a career mode that lets players life the live of a rally driver and compete for a place on Loeb's team.

"We're excited to be able to publically announce our first proprietary IP dedicated to the world of autosports, and our second new IP for 2015," said Milestone VP Luisa Bixio.

"Building on the expertise accumulated over recent years, with the development of four titles dedicated to the world of rally, we have decided to push the envelope with a title that goes beyond the canon of licensed games. We are thrilled to be working on this title alongside one of the most iconic figures in rally history."

Milestone has previously developed games in the WRC series, although it isn't clear whether the developer still holds the license. VideoGamer.com has contacted PQube for further clarification.

Sebastien Loeb Rally Evo follows the announcement of RIDE earlier this year, a new superbike racer also in development at Milestone due for release early next year.
Click to expand... 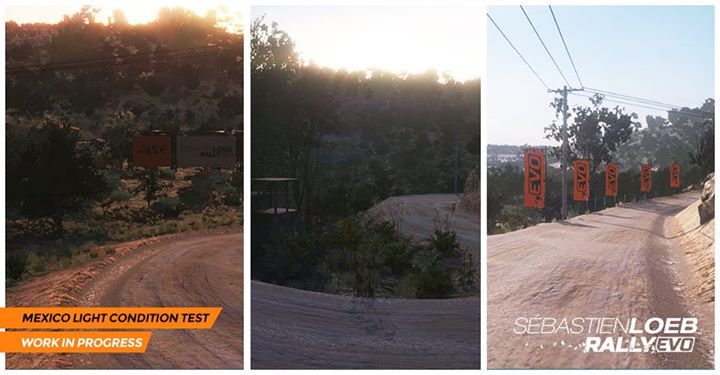 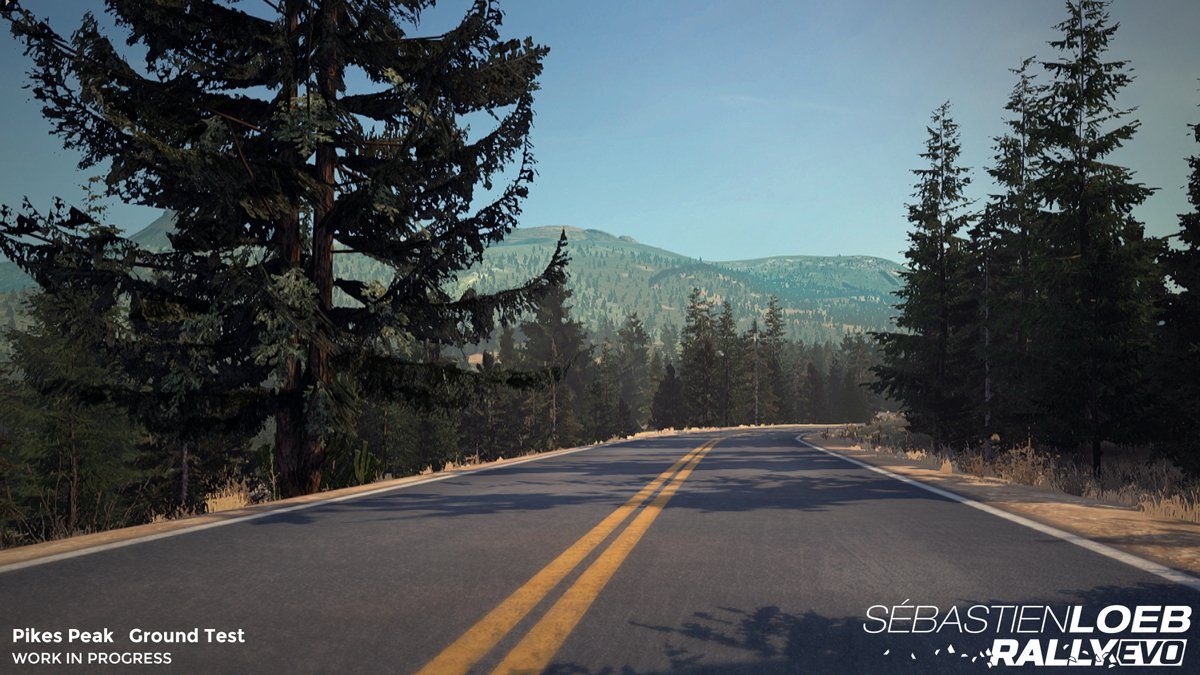 Check out these links:

Best case this is the new Richard Burns Rally.

Worst case.. I don't even want to think that thought.

I'm interested in seeing how it turns out, though. Codemasters need a good ol' kick in the rear.
T

I'm guessing they haven't renewed the WRC license going by the title.

Love a rally game so will definitely keep an eye on this one.

Yup this explains why there was no WRC5. Excited for the game, not gonna be pessimistic

And a rally game on PS4

Not a huge fan of Loeb, but I'd get it if it's going to be a serious rally game. None of that X-games 🤬.

Xbox One, the all-in-one games and entertainment system from Microsoft, and Playstation 4.
Click to expand...

Xbox either has early DLC, or exclusive content. You heard it here first.

Daniel
Xbox either has early DLC, or exclusive content. You heard it here first.
Click to expand...

Yeah, that does sound a bit 'preferring' of them.

I am excited by this, PS4 needs as many decent racers as it can get.

Yeah, was wondering why they were all lovey dovey for the XB1 lol.

no it won't, full rally simulation, point to point... is just a way to use the assets from all the wrc games they made without the wrc licence and i'm really happy with it.

I'm keen to see what they can do on new gen. Definitely getting it.

What not even a screenshot?

I never really paid any attention to the other games that Pqube distribute - I've never heard of Crash Times 5 or Air Conflicts: Pacific Carriers before.

Judging by those being very close in style and content to certain other games that already exist, perhaps it is reasonable to hope that they are pushing Milestone toward the Richard Burns Rally route.

EDIT: I see that they are older PC games being ported for consoles, so maybe not.
Last edited: Dec 20, 2014

Milestone s.r.l., Italy’s leading videogame developer for consoles and PC, and the world’s foremost motorcycle videogame developer, offers gamers an enticing glimpse of a winter wonderland with the first batch of screenshots from Sébastien Loeb Rally Evo, Milestone’s exclusive new IP, scheduled for release in autumn 2015 on Xbox One®, the all-in-one games and entertainment system, and PlayStation®4.

The Italian development team has implemented a raft of technical improvements. SLRE is theculmination of all the sim-racing know-howaccumulated by Milestone over years of developing games dedicated to the world of Rally driving. The proprietary engine has been enhanced to take full advantage of the power of the new generation of consoles, with advanced lighting and vegetation systems. The first batch of screenshots illustrates the scrupulous care taken in the reconstruction of real environments, now made even more immersive and engaging, enriched with meticulous attention to detailin every element of the settings, faithfully reproducingwhat the player would see whilecompeting in Rally Sweden.
Among the most noticeable improvements are: the tracking system for tyre marks, redesigned to take account of the differentsurfaces; the advanced rendering features of the new shader*, bringing out the best ofthe new environments and the bodywork of the cars, with an advanced Real Time reflection system; and a new camera systemfeaturing dynamic focus effects and television-styleframing during Replays.

A name. A legend. One of the most exciting rally challenges in the world. Four wheels. These are the ingredients that make up Milestone’s first proprietary IP dedicated to the world of autosports, a title that launches the player into the world of rally alongside one of the most iconic figures in the history of the sport: Sébastien Loeb. This uncompromising rally simulator debuts on PlayStation®4 and Xbox One. Milestone studios are gearing up for a glorious 2015. Created in collaboration with nine-time rally world champion,Sébastien Loeb Rally Evo will powerslide into players’ homes all over the world with the aim of getting their adrenalin pumping and delivering all the thrills of the world of rally.

Features:
Career mode: live the life of a rally driver and compete for a place on Sébastien Loeb’s team, where he will be your mentor and guide you through all the secrets of the sport.
Offline mode: work on your skills and perfect your driving style for a truly rewarding experience.
Online modes: challenge friends and rivals from all over the worldfor endless entertainment.

Currently in development at Milestone studios in Italy, Sébastien Loeb Rally Evo will be available in autumn 2015 on Xbox One and PlayStation®4.
Click to expand...

If they're not releasing it for the PC, then there's no way this'll be the next Richard Burns Rally.

ProjectWHaT
If they're not releasing it for the PC, then there's no way this'll be the next Richard Burns Rally.
Click to expand...

RBR seemed to do okay on the consoles and the console/PC divide is much narrower currently, so I don't see why not.

I just hope it has a variety of cars that aren't just WRC spec, because the current crop leave me cold. Late 90s Group A and starting out in a Group N car would be amazing.

With the amount of development of the rbr mod and the surface mechanics, i doubt it would be the next rbr. dont forget they're also developing their own motorcycle game which I'm also skeptical about.

Why compare it to the RBR mod? This is a game, not a mod. It should easily match RBR in this day and age of tech.

Those snow textures on that first screenshot aren't very reassuring about "Marvel at the power of the new consoles with graphics from the Rally game dedicated to nine-time World Champion Sébastien Loeb".

MildAshers
Why compare it to the RBR mod? This is a game, not a mod. It should easily match RBR in this day and age of tech.
Click to expand...

Because the mod has over last few years added more to game; to the point the mod is used in many rally simulators. I also have played both the game and the mod. The mod also adds many new stages and cars from all different sets of regulations.

The other reason why nothing has matched rbr is the game would be tremendously frustrating to a normal console player. Its bad enough with a wheel.

Mods have added lots to lots of games, doesn't mean they should be compared to future games.

MildAshers
Mods have added lots to lots of games, doesn't mean they should be compared to future games.
Click to expand...

If a game can't compete with a mod what does that say about the game?

Who said it cant compete with it? RSRBR is a fan made thing for a tiny pc market that takes too long to download and install and is as user friendly as a pet polar bear. Its a mod, not a game. There is no comparison, WRC4 is a better game than RBR or RSRBR. RBR needed to be modded to stay relevant and there's still only a tiny amount of people who care.

As for the console argument, RBR sold terribly full stop so of course no one will bother making another sim.

MildAshers
Who said it cant compete with it? RSRBR is a fan made thing for a tiny pc market that takes too long to download and install and is as user friendly as a pet polar bear. Its a mod, not a game. There is no comparison, WRC4 is a better game than RBR or RSRBR. RBR needed to be modded to stay relevant and there's still only a tiny amount of people who care.

As for the console argument, RBR sold terribly full stop so of course no one will bother making another sim.
Click to expand...

Have you actually played RBR/RSRBR2014 or are you making sweeping statements?

while yes i accept its a mod, my point is rally games vary rarely feel realistic while rbr old it is still the most realistic. my original point also was entirely valid and that is it won't be another rbr style game.

I'm not going to argue which is a better game as that is entirely subjective.
however i'm increasingly seeing people ask whether or not rally games are arcade or like rbr? clearly there are people wanting another rally sim.
Last edited: Jan 26, 2015

I have played it yes, it isn't fun., in my opinion, its lacking game. I'm not denying some people want a rally sim, but firstly, we have no idea what SLRC is gonna feel like. To me the fact they have offloaded WRC to someone else tells me they have different ideas for this game completely. Until we know more or more has been shown we cannot speculate as to whether or not this will or won't rival RBR. RSRBR doesn't come into it for me as it is not a game in its own right b
E

15 different game modes! A journey to discover the best rallies of the world!
Grow your driving experience along different events around the world through the best and beautiful rallies; Show your skills and lead all the competitions driving against aggressive competitors in RallyCross or into reckless head to head challenge and special events.

Drivers will have the chance to customize the car. They will be able to choose among 20 different liveries, special materials to be applied on the body, Race Number, Plate and Stickers.

Experience all the weather conditions like in a real race! There are multiple daytime illuminations on each track: Dawn, Noon, Sunset and Night.

Nice! I'm definitely keeping an eye on this.

I never thought I was going to say this, but Milestone (of all companies) just might deliver the first proper offroad simulator in a decade and contender no. 2 for Rally Game Of The Universe.