Great racing with you last night!👍

SRT DK Racing
it would be like taking candy from children and i allways got told i couldnt do that by my parents , so no hehe
Click to expand...

If it starts raining, and i remember correct. The small droplets, that fall out of the sky aren't your best friends.

I did all race on IM too;P when i start to think about wet tires it was 6min to finish so was a bit too late for me ;P
Click to expand...

Hey Wonski,
welcome, we had some great races last night, welcome.
I will put you in the new thread for the new series, as you are away in Poland for 2 weeks.

If it starts raining, and i remember correct. The small droplets, that fall out of the sky aren't your best friends.

No Problemo anymore , I have found the right way too deal with the wet , its really simple , STAY INDOOR AT YOUR HOME 💡

Think there are plans for wet Spa practice around 1400 today

SPA RACE TEST RUN IF ANYONE FREE AT 1400 UK TODAY

Weather 20%
Time 12.00
Time progression X1
Weather changeability X15
Surface water at start 10%
All Drivers to start on RH as track will be dry in seconds

Weather 20%
Time 12.00
Time progression X1
Weather changeability X15
Surface water at start 10%
All Drivers to start on RH as track will be dry in seconds

In. Maybe I can pick off a couple of G5 towards the end. Or settle for getting lapped after 12 minutes like at Bathurst.

In for tonight
P

Delta, you g4 sorry i amde mistake yesterday.
After a win you move up a group.
Ben won last race so Ben in G3
You were g3 last week, so you back to g4 now.

'It's 0% the track should be dry. I recommend dry tyres'

Lying 🤬! I pirouetted on pit exit without touching the throttle!

I spin on Inters and I spin on Hards, what the 🤬 do you want me to put on?

Try it again next week.
P

The track settings were correct as posted so the race stands.

It was a great race with mixed weather.
It was intended to be like that as it is very changeable.
In test races we had if the temp stayed above 13degrees it didnt rain.
If the temp fell below that it did rain intermittently.
There is no control of the temperature its random and fluctuates.

Star. as in reality, different parts of the track have different amount of water on them.
The indicator is for the racing line only.
When it dries out it stays wet offline for a while, and vise versa, when it starts raining the race line is dry but offline gets wet.

In my opinion it was the most exciting ravce i have ever been in, as changeable weather makes it so much more exciting.

In our test race on sunday it stayed dry throughout.
Last edited: Apr 25, 2016 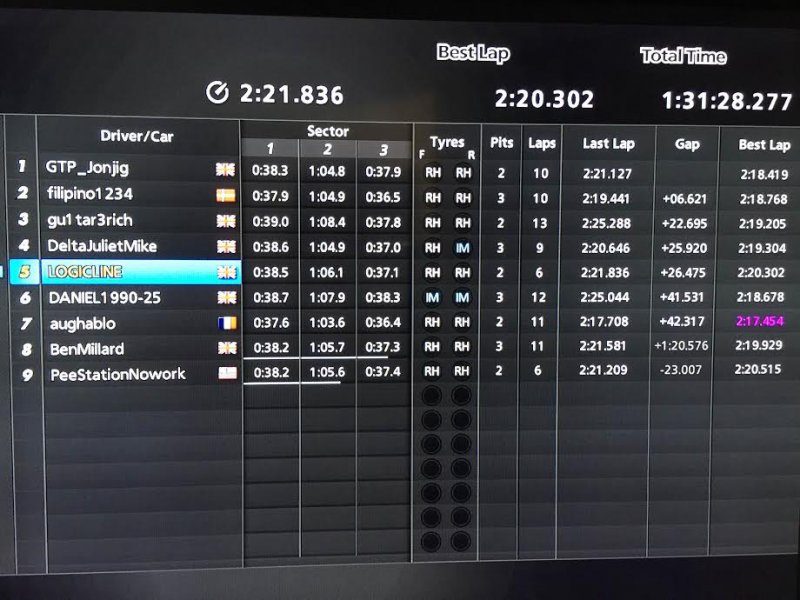 Wow, what a race, from my view.

Well, after many practices it was dry throughout.
It seemed the tipping point for rain was under 13 degrees, and it did drop to 12 in the race lobby before we started.
I have no idea how the room decides what temperature fluctuations are, but above 13 degrees it seems the threaten rain but does not quite rain.

Of we went and all went well, gradually dropping from 1st to 5th behind my G4 guys.
The weather looked as though it was gradually getting darker, but i had decided to do 1 stop as i was slow whatever
my tyre wear was.
I had a good battle with each of the G4 guys as they battled to get past me, but i was happy and hoping for a sprinkling of water.

Apart from Fili and me, the G4 guys did a stop after 38 minutes, and then it became very overcast and very gray, so i tried to wait to see if the rain would come.

It started lightly raining at 49minutes but the track looked as though it was staying dry online.

I was 2nd with Fili around 23 seconds ahead when he pit at 51 minutes.
I had to pit at 53 minutes as fuel limit was reached and rain was still light and no spray offline,
so i gambled on Inters and hoped it would keep raining.

I came out again behind my G4 guys, but they were on Rh and
as the rain got to 1% at 57minutes and then climbed to 25% at 61 minutes they stated to slow and i had some great
little battles with my inters.

I came out in 3rd place behind Jon and Fili, and was quite happy with that position, but then i was reeled in by
Richie and Delta over the next few laps.

I was not sure what tyres the lead 2 guys had, but then with 9 minutes to go it started to rain again and i thought the fun would begin but it never got to the point of spray online.

I just had the best time ever.
Not knowing what was going to happen with the weather made it so much fun for me, as at different stages
i had some great battles with Delta, Richie, Fili, and Sam until he quit.

Thanks to everyone for taking part, its great when we have rooms with many drivers in.
Aug, i just cant believe what i see, watching the replay, your tyres on 6, one handed doing 2.18s in the damp, its hard for me to watch to be honest, i really think its magical.

Hi, I could not run the race yesterday. I came only at 10 pm from work to home. Sorry that I have not logged out.

fred121
Hi, I could not run the race yesterday. I came only at 10 pm from work to home. Sorry that I have not logged out.
Click to expand...

No Problem Fred, thats fine.
Are you joining the new Hsv series ? if yes let me know.

I'm sure there.
No race on the most beautiful track in the world?