The All American World Series. 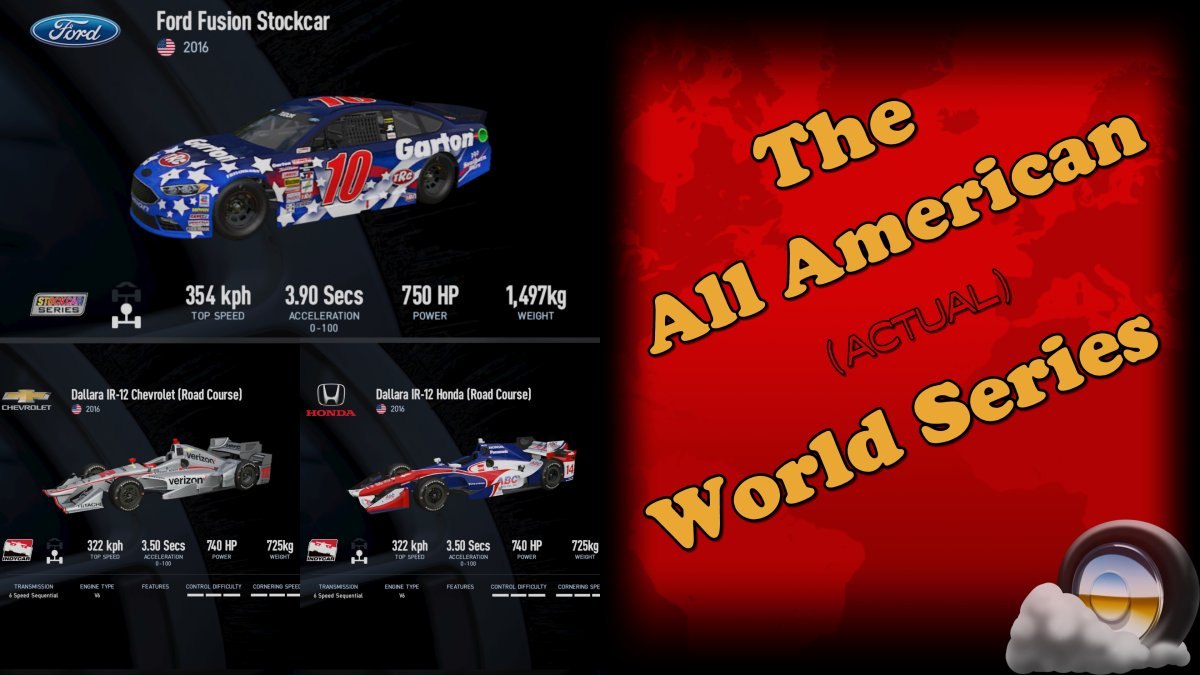 ​
In this championship we'll be taking 2 of the USA's iconic race car series out from their usual haunts and on a tour of the worlds racetracks. ( Yes other countries do exist

We will be starting off each evening in the Ford Fusion stock car with a 10 minute qualification period followed by a 20 minute race with a rolling start.
The Ford is quite a heavy beast to throw around racetracks but is actually quite capable and pretty fun when you get to grips with it. I'd suggest using the stable circuit setup, the others can be a bit wayward. Remember to brake early, it's a hefty machine but still very fast.

Following on from the stockcar we'll be moving on to the Dallara IR-12 Indycar. This is a bit different(!) so there'll be another 10 minute qualification session to get used to the change of car followed this time by a longer 30 minute race with a standing start.
You'll find there are 4 versions of the Dallara to pick from. As shown in the above picture, use either of the 2 road course models, not the oval/speedway models. The Chevrolet and Honda versions I find are very similar, try them both and pick your favourite. Either of them has huge amounts of downforce so sticks to the road very well. They also have a KERS boost system. It's a limited one though and doesn't regenerate. You only have 10 goes at it, however each burst does last for a good amount of time. Use it wisely.

All told it should be about 90 minutes in length.


Weather.
The Stockcar races will be held in fine weather. There might be some cloud cover on occasions but nothing to extreme. A morning setting will be used.
The Indycar races will be set in the afternoon and will be a little different to usual in that I'm going to try the game's random weather feature. It's a 30 min race and the weather speed will be set to x2 so that means there might be a change of weather just towards the end of the race - or there might not be. So there could be rain/snow/thunder/blizzard/etc, or it could also remain fine. Whatever the change is it will only be for a short while and will not come on abruptly. There might be a pitstop required if it begins to get wet. The Indy's tyres do wear down quite quickly anyway.

One other thing that is new... I think I'm going to enable tuning! This is really only because both cars, especially the Dallara, have quite low gearing, they will hit the rev limiter on long straights. The main thing I'd like everyone to adjust is the final drive ratio - it needs dropping one notch. Other things can of course be tweaked when enabled but I'd prefer everyone to refrain from tinkering too much. Make it about the driving not the mechanic-ing.
We'll discuss this during the test meeting.


Settings
ABS and TC allowed if needed. (TC useful in the stockcar)
Standing starts.
Damage will be Visual only.
Penalties - ON
Track limits - ON (Probably)
Drive Through Penalties - Off
Pit Exit Penalty - On

Looks interesting Paul, won't be able to meet today for the test races but count me in for the series! 👍
T

Hi @IfAndOr , thanks for organising this championship.

I won’t be able to join today’s practice, but count me in for the championship.

I'll be there Paul. i wasn't sure if I'd driven the Stockcars in Pcars, but now I'm confident that I hadn't; I'm sure I would have remembered. They're ACE!

I do agree about the handling setup, mind. Loose is a fantastic challenge when driving on a clear track, but I would find racing among others much more comfortable in stable I think.

I don't think I'd spent much time with them myself, they were quite a revelation. Loose is an aptly named setup in their case. They are certainly a bit different to the Indycars anyway.


I must remember tonight to ask about/test rolling starts, they might be more suitable. Oh and pitstops for the longer race.

After yesterday's bit of testing I've decided to begin the Stockcar races with a rolling start. The Indycars will be standing starts (unless this proves to be troublesome).

I'll do a bit more testing during the week and then post up any setup tweaks I've found useful.

I was considering a mandatory pitstop in the Indycars but with the tyre wear that they have I'll leave the choice of whether to pit up to everyone. You may need wets anyway.

Time of year will probably be set to summer. That way if the random weather decides to throw a blizzard at us it won't be quite so impactful!

I think I heard mention of Spa being on the list of possible tracks in this series?

If it is, it gets a thumbs up from me. It really highlights the weaknesses of the Stockcars, and makes every completed lap something to celebrate. Woohoo!

Zolon32
I think I heard mention of Spa being on the list of possible tracks in this series?
Click to expand...

I haven't finalised the list yet, it depends on how popular the cars are on how many circuits we visit.
But next Monday I think we'll start off in the USA at the Circuit of the Americas - CotA. Full GP layout for both cars.

We haven't used CotA lately. I know the Indys get around it okay. I've not tried the Stockcar yet.
X

Looking forward to get back on track with y'all! A week and a bit

xeronima
Looking forward to get back on track with y'all! A week and a bit
Click to expand...

Welcome back Xero. Just a quick word of warning, we're not talking to Paul any more; his track choice is provocative.
X

Zolon32
Welcome back Xero. Just a quick word of warning, we're not talking to Paul any more; his track choice is provocative.
Click to expand...

Guess i missed a lot 🤣

Zolon32
his track choice is provocative.
Click to expand...

How do you know about my Stockcars around the kart tracks plan? 😀
Ok they won't be wide enough to overtake on and you may have to do a 3 point turn to get around some of the corners, but they are just minor problems.

Good to see you and your internet are back Mr @xeronima. Good to see the caravan gone. 👍

Would be good to have it on for COTA, even though I am likely to fall foul of it.

half_sourly
Would be good to have it on for COTA, even though I am likely to fall foul of it.
Click to expand...

I'm glad you mentioned that because I had been undecided since it is a tricky track. I'll leave track limits on. And then blame you if anyone moans. 😉


I have been making a few tweaks to both cars, mainly to the Stockcar though. I was going to write them down on here but it's easier to share them on Monday if anyone wants to try them out. I'll try to open a lobby early to do this.

I've tried the Stock car for a few laps today and only switched on SC. That seemed to calm it down enough and stopped the low speed oversteer issue.