If this is about £250 pounds, I'll get it nearish it's release and my iPod Touch will become neglected when it comes to games. I hope we see alot of Touch-screen only titles straight from the iPhone and that, but also see proper PlayStation titles on it too!

ryanb98
If this is about £250 pounds, I'll get it nearish it's release and my iPod Touch will become neglected when it comes to games. I hope we see alot of Touch-screen only titles straight from the iPhone and that, but also see proper PlayStation titles on it too!
Click to expand...

You are almost guaranteed to see more game types made for touch screens at low prices. With the Android app you can expect Sony to lighten up development licenses for the Playstation Suite. Aside from that some PS Minis may get touch control updates without needing to buy it again.

That thing is HUGE! It reminds me of the HP Streak. I love the "touch an area to make the character climb. The rear touch bad is a little interesting and will be another arthritis inducing thing from Sony, I think. But Uncharted looks awesome. And the new game play mechanics are good.

Hmmm.... two analog sticks? I'm not really into the PlayStation portable but it will be interesting to see what games come out.

I thought the whole "slide the fingers on the rear touch panel to climb the rope" thing was pretty awesome. And the swinging on the rope thing was cool too. May just have to get me another hand-held when this thing comes out.

afterdawn
The latest rumor, and "confirmed" by a couple of photos, is that Sony will name their upcoming NGP handheld "PlayStation Vita."
Vita is the Latin term for "Life," which could absolutely be a reasonable name for the system.

Additionally, psvita.com has the same technical contact as psp.com, Sony.

Whether the rumor is true or not, we will know the official name of the system at Sony's E3 keynote on June 6th.

For controls, the updated handheld adds dual micro-analog sticks, giving gamers a feature they begged for on the original PSP.

The device has a massive 5-inch multi-touch OLED screen with 960×544 resolution, a multi-touch panel on the back and will run on a quad-core ARM cortex processor. 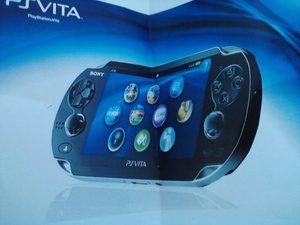 I think its a pretty random and rather horrible name, it doesnt have the instant brand recognition as 'Playstation NGP' or 'PSP2' does and makes it sound like a drink.

Well I agree Robin, The name is not awesome and it makes it seem less gamey, more do it all. NGP was a nice codename but PSP2 would have been better. Marketing has its work cut out for them. Can't wait to see the games.

Even at $300 for the base thats a great deal compared to PSP and 3DS considering the specs. But we shall find out next week how much this will cost.

Well, can I have it in strawberry flavour please? People will be thinhking it's some kind of vitamin, not a handheld...

I would love to buy it. But I think I will have to wait

I looks like the PS Vita name is a done deal... shot of the trademark application in Europe, I guess we will know in a few hours. Oh well as long a the hardware is awesome when can just forget the horrid name and call it the PSV.

NGP was so badass, its a shame.

I'm predicting Gameloft will have HDHD Version of their mobile games for it since they unloaded their Library including timed exclusives to the Xperia Play.

Time to see this bad boy at Sony's live conference at E3.

"We'll be partnering with AT&T as the exclusive carrier for Vita in the United States."

"... and that announcement was met with an audible groan in the crowd during Sony's E3 keynote."

I wonder what that exactly means? Can I only get the 3G version of the PSVita if I sign up for AT&T service?

Had some BOO's when they announced it was for ATT, (Since the Iphone now on Verizon) And to Sier that would be an existing data plan I would assume.

I still can't get over that name! a mark of bad or lazy product naming is when you take a word which you want to convey in English and then translate that word in to (insert interesting sounding usually old European language here) and then you get your fancy name. Oldest and lamest trick in the book, of course unless you are from said country!

Apart from that its an amazing piece if hardware and the pricing is very reasonable, makes the 3DS look really overpriced at the same $250 price point! (its already been reduced by £80 here in the UK).

The quality of the PSVITA looks amazing. You need only see "Uncharted: Golden Abyss" to find that out. It looks INCREDIBLE! The game looked like someone literally shrunk the PS3 into a portable gaming console. It was inconceivably lovely. Only portable console I've ever wanted in my life was the very first Game Boy.

As for the PSVITA name, I don't know. Adam Sessler joked that "NGP" sounds more like a hip-hop '90s collective. I'm not offended on this name much like when people were offended by the name "iPad." I mean- make the call: PSP2, PSP NGP (or just NGP), PSVITA. Which sounds best to you? I was pretty impressed with this device, regardless of what it would be called.

Sold! $250 feels like they are giving it away. Quad core cpu/gpu, psp playback, cloud saving oh and Little Big Planet is was the best game for the device. It will make the best use of touch screens. Its coming this year.

PSV will take a while to grown on me but after the price reveal, it could have been called PlayStation Veal.

This time Sony is doing it right. 250 Euro's for this machine is nothing, 250 Dollar even less. Am really surprised about the price, won't buy it though, don't have the money.
Last edited: Jun 7, 2011

So does this still work as a phone or is the 3G like it is on iPad?
T

Is that US$250? Because that is dirt cheap

Surely that's not the final name... the ryvita?

Is not my real name.

Any news in battery life.

What's the difference between the wifi and 3G versions?

I don't know if it's been posted, but here's a really good demo of PSVita controls using UNCHARTED: THE GOLDEN ABYSS.

Don't know if this link has any novelty to what has been written here already, but it can't get more official then this:

(got it from eutechnyx's twitter, they're one of the many european 3rd party developers listed in that link)


About the name ... meh, VITA is a latin word (I suppose the italians still say "life" the same way) but it totally lacks "power"

TenEightyOne
Surely that's not the final name... the psvita?
Click to expand...

I would be quite tempted if it had the ability to make calls and that I could use it on the Sprint network. The last time I had a handheld console was the first DS for $149.99. My interest in the handheld market has gone really low since then. The only reason why I would be tempted in this is that if I could make phone calls with it. It would mean I'd have one less device to carry around and if I'm bored I can load a game on it. It's one of those things I say, "Cool but I don't need it", place the handheld down and move out of the store.

Would it be worth picking up a used Vita or PSP to play this game?

Sony's Jim Ryan Claims That Consoles Will Make A Profit.

The odds of GT coming to PC