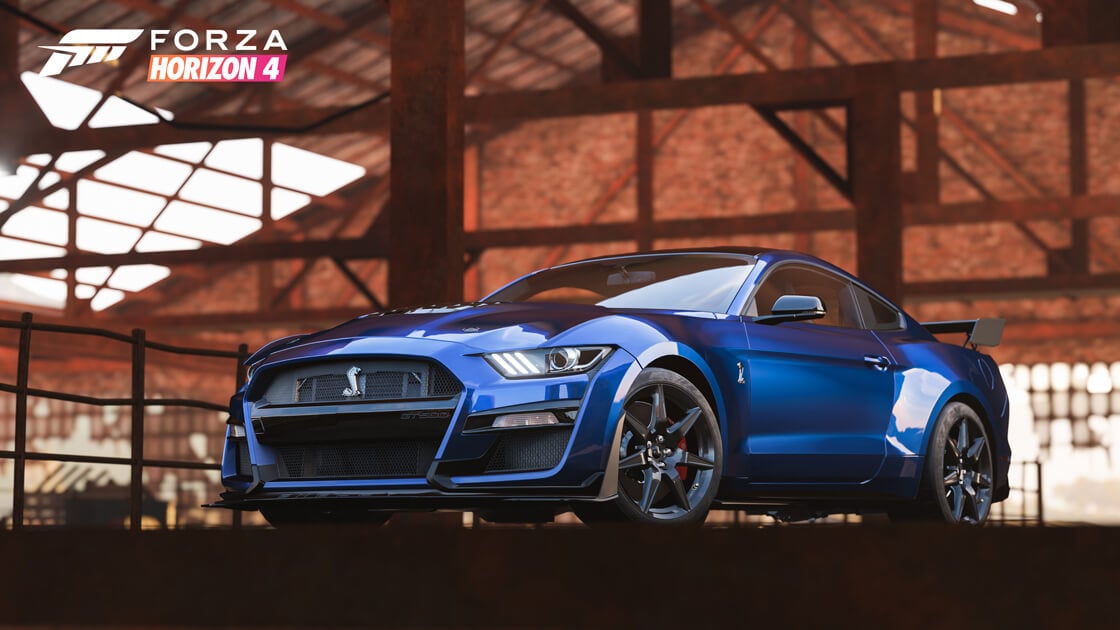 Summer has made a fresh appearance in Forza Horizon 4 to kick off a new season in the UK. Despite a warning from Playground Games about a potential delay, Series 32 has started on time, bringing more events and content.

With focus aimed on the recently released Hot Wheels Legends car pack, there’s also a venomous Ford Mustang up for grabs along with updated Playlist prizes for 50% and 80% completion. Get out the sunscreen and let’s check out Summer’s offerings. 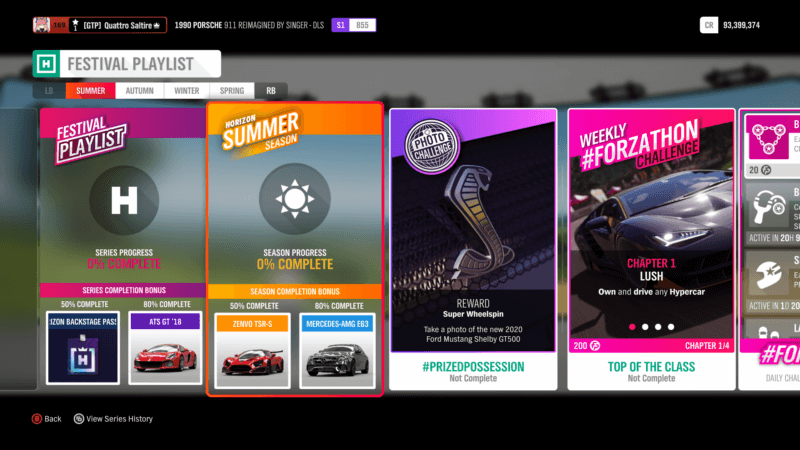 Taking center stage for the Season Playlist prizes is the 2019 Zenvo TSR-S. Heavily upgraded from the standard ST1, the TSR-S puts a hardcore track focus to the forefront.

There’s also serious grunt under the hood, courtesy of a 5.8-liter, twin-supercharged V8 pumping out nearly 1,200hp. In order to get that power on to the road, the TSR-S has a radical active “Centripetal Wing”; the rear wing will tilt to either side to give more aero load to the outside rear wheel when cornering and increase grip.

For those after more general sophistication, there’s the 2018 Mercedes-AMG E63 S. The ultimate incarnation of the E63 brings a clever four-wheel drive system to tackle any weather condition with ease. As a result, deploying all 603hp from the 4.0-liter, twin-turbocharged V8 will be no problem.

Festival Playlist completion prizes include another Horizon Backstage Pass and the return of the 2018 ATS GT.

The first Photo Challenge for Series 32 involves the star car of this week’s seasonal championships, the 2020 Ford Mustang Shelby GT500 (more on that later). #PrizedPossession simply requires a picture anywhere of the latest Mustang. In terms of seasonal championship prizes, machines including the 1933 Napier Railton and 1994 Toyota Celica are up for grabs.

This week’s main dish is the new Shelby Mustang. In order to take the fight to Dodge Hellcats, Ford has created its most powerful production road car, besting even the flagship Ford GT. Power comes from a supercharged 5.2-liter V8 making 760hp. With a seven-speed dual-clutch transmission and uprated suspension, this Shelby will do much more than just demolish the drag strip.

To win the Shelby, you’ll have to win the “Flex Your Muscles” championship.

Returning for Summer is a classic Showcase Remix event. “Nine & Three Quarters” puts you behind the wheel of a Ford Anglia in a race against the Flying Scotsman. Sadly the option to fly and become invisible is not possible. 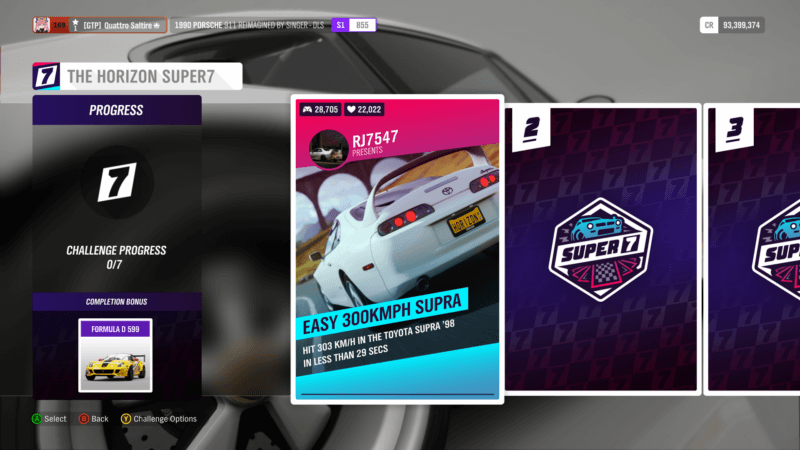 A new series means a new set of Super7 challenges. This week has the Formula Drift Ferrari 599 as the completion prize. Finish all seven cards and you’ll receive this tire shredding machine.

The newest Summer events are below:

Forest For The Trees 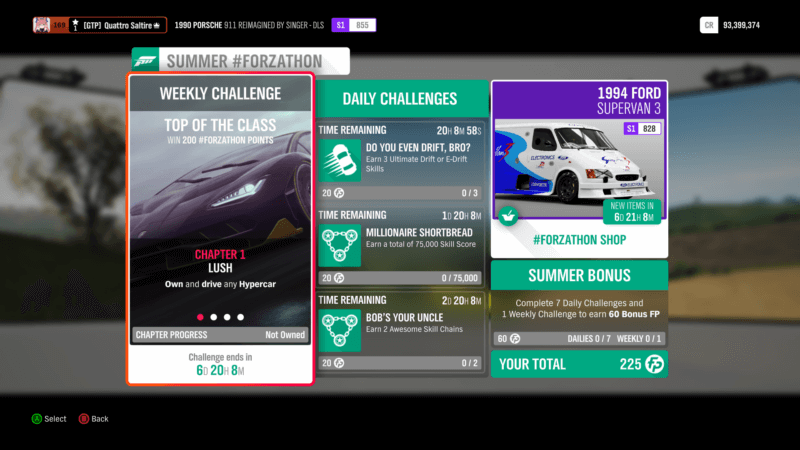 To kick off the new season, Forzathon looks at the ultimate road going Hypercars. Choose your favorite weapon to get started.

Next, demonstrate your overtaking prowess by earning 10 Pass Skills during races. Afterwards, refine your driving by earning a total of 9 stars in Speed Zones.

Finally, it’s a return to the races as you’ll need to take victory in a Road Racing Series event at Lakehurst Forest Sprint. 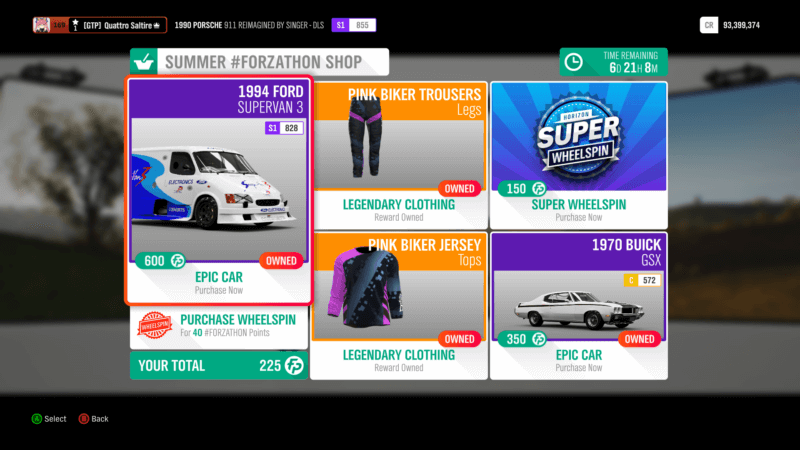 A mix and match of cars are available in the Forzathon shop, led by the Ford Supervan 3.

Combining a Group C prototype with a Ford Transit van has resulted in one of the wildest commercial vehicles ever made. Originally fitted with a Cosworth V8, the Supervan in Horizon has a 3.0-liter V6 making 300hp in order to improve drivability.

If you want the Supervan, you’ll have to part with 600 Forzathon Points. In return you’ll get a van that will get you to every delivery on time.

Joining it is the 1970 Buick GSX. Another muscle car that was overshadowed by the big three, the GSX has the credentials to be up there with the best. Under the hood sits a massive 7.4-liter V8 making 360hp. With a few more tweaks, you’ll be extracting much more.

At 350FP, the GSX should deserve your attention, especially if you find the established muscle cars too common.

Clothing available for this week is the Pink Biker Trousers and Pink Biker Jersey.

Gary Slater · Feb 11, 2021· Comments
As 2022 begins to enter the closing stages, Forza Horizon 4 welcomes December with an apt Winter season. With festive plans beginning to take shape, players are continuing to hunt down the latest events.

Gary Slater · Feb 11, 2021· Comments
For many Americans, this week is a time of giving thanks, but for those at the UK Horizon Festival the time has come for a new Autumn season to begin in Forza Horizon 4.

Gary Slater · Feb 11, 2021· Comments
As temperatures soar around the UK, a new Summer season has officially gotten underway in Forza Horizon 4. We’re now in the opening stage of Series 55, meaning a fresh remix of events and prizes that are once more waiting to be claimed.

Gary Slater · Feb 11, 2021· Comments
Sunshine and rain showers around the UK are the ideal recipe for a new Spring season in Forza Horizon 4. The end of Series 54 is in sight and players around the festival are mounting one last assault to grab the remaining content up for grabs.

Andrew Evans · Feb 11, 2021· Comments
Forza Horizon 4 is now midway through its 54th Series, as Winter once again reaches the UK.

Gary Slater · Feb 11, 2021· Comments
Darker nights and spooky creatures roam the streets as another Autumn season makes itself known in Forza Horizon 4. Halloween is just around the corner and there’s plenty of treats on offer in the latest events.

Gary Slater · Feb 11, 2021· Comments
The heatwave gripping the UK festival means that a fresh new Summer season has officially begun in Forza Horizon 4. We’re marching into Series 54, with a freshly assembled set of events and targets for players to aim for over the next four weeks.

Gary Slater · Feb 11, 2021· Comments
Flowers are blooming and the sun is shining as a new Spring season gets underway in Forza Horizon 4. As the 10th Anniversary celebrations are kicking off in Mexico, those in the UK are nearing the end of Series 53 with a final push to grab the last batch of current content.

Gary Slater · Feb 11, 2021· Comments
Dark nights and a white landscape mean that a new Winter season has started in Forza Horizon 4. Plowing through deep drifts and treacherous ice will uncover the latest round of events and more content to fill your garage.