The return of color to the forests means that a new Spring season has started in Forza Horizon 4. Series 35 is now in the closing stretch, with the last batch of content now available.

A Porsche grand tourer muscles its way to the UK this week, along with updated Playlist prizes for 50% and 80% completion. 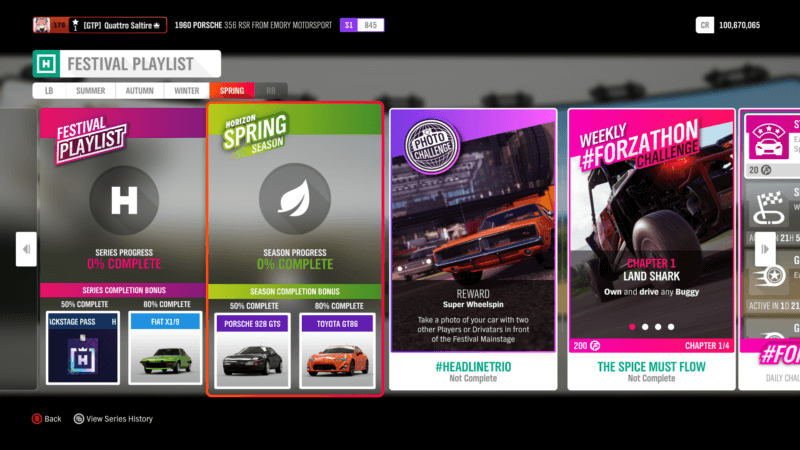 Taking the spotlight for seasonal completion prizes is the 1993 Porsche 928 GTS. This bruiser was the first V8 car in Porsche history when introduced in 1977.

Orginally conceived to tempt American buyers away from the 911, the 928 had to carve its own path as customers continued to put their faith in the rear-engined sports car. Sales charts were not set alight in the US, and the 928 was pulled from sale in 1995. The GTS was the runout model, powered by a 5.4-liter V8 making 345hp, which will provide ample muscle for long journeys.

Those seeking more fun can look to the Toyota GT86. Reviving the iconic 86 name, Toyota’s small coupe was developed alongside the Subaru BRZ as part of the “Toyobaru” collaboration. Under the hood is a Subaru-derived, 2.0-liter flat-four making 197hp. Combined with a chassis set up for sliding rather than speed, the GT86 is one of the most fun cars to hit the streets.

Closing out the Photo Challenges for Spring is #HeadlineTrio. For this objective, you’ll need to find two players to join you in front of the Festival stage. You can also use Drivatars to complete the challenge as well. Over with the seasonal championships, the prize pool features the Ferrari 512 S and the Ford SVT Cobra R.

The main highlight this week is the 1991 Peugeot 205 Rallye. Sold as a cheaper alternative to the legendary 205 GTI, the Rallye showcased pure basic performance driving. Thanks to a stripped back interior, the 205 weighs just under 1,750lb, meaning the 1.3-liter, 100hp engine loves to be thrashed when you get on to a winding road.

In order to win the 205, you’ll need to take victory in the “Star Dew Rallye” championship.

A Showcase Remix event helps close out seasonal races, with the return of “Taxi For Takeoff”. In this race, you’ll be strapped into Isha’s highly modified Austin FX4 taxi for a race against a Deltawing aircraft. 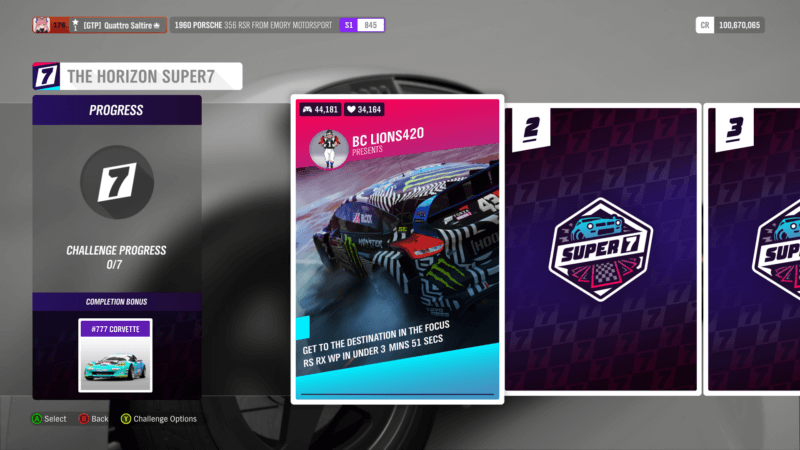 You can find the Spring events and prizes below:

The Car In Front

The Trial: Drive On The Wild Side (Co-Op Championship) 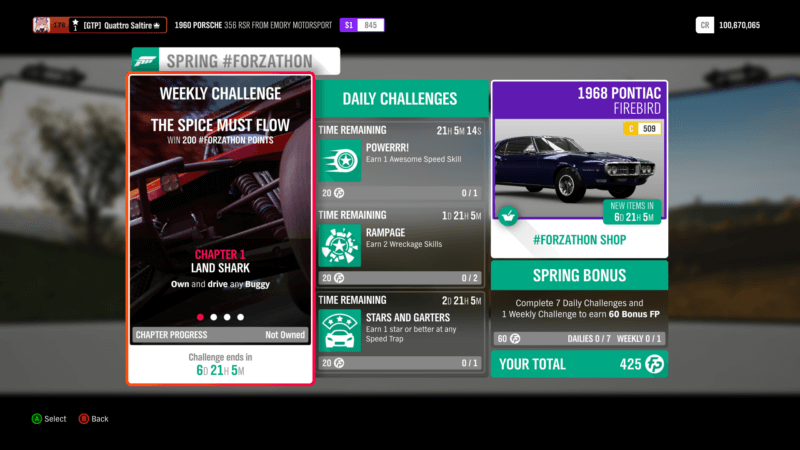 Forzathon gets dirty this week as the spotlight shines on the offroad buggies. Choose one of these weapons to get started.

Up next, test your buggy’s suspension to the limit by earning a total of 10 Air Skills. Afterwards, head down to the races and win a Cross Country Series event at Castle Cross Country Circuit.

Finally, bring the curtain down on this week by driving your buggy for 10 miles across the countryside. The more you can stay away from roads, the better. 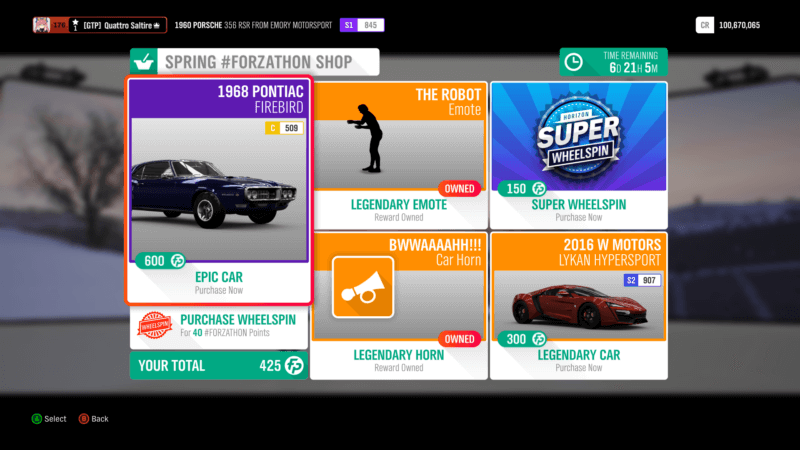 Taking center stage in the shop this week is the 1968 Pontiac Firebird.

Although based on the underpinnings of the Chevrolet Camaro, the Firebird features more aerodynamic styling. Giving the Firebird its firepower is a 6.6-liter V8 making 340hp. With some upgrades, you’ll be king of the quarter-mile in no time.

You’ll need to part ways with 600 Forzathon Points if you want the Firebird. In return you’ll get to see the origins of one of the most iconic muscle cars ever made.

This oddity is the first supercar to come from the United Arab Emirates, with no expense spared on styling, or the $3.4 million price tag. Under all the angles sits a 3.7-liter, twin-turbocharged flat-six from Porsche tuners Ruf. With 780hp at your disposal, the Hypersport will give more established competition a startling surprise.

At 300 FP, the Hypersport is a relatively cheap way to get on of the most exclusive hypercars on the road. Just don’t try to jump off any buildings with it.

Novelty items available include the Robot emote and the Bwah! horn.