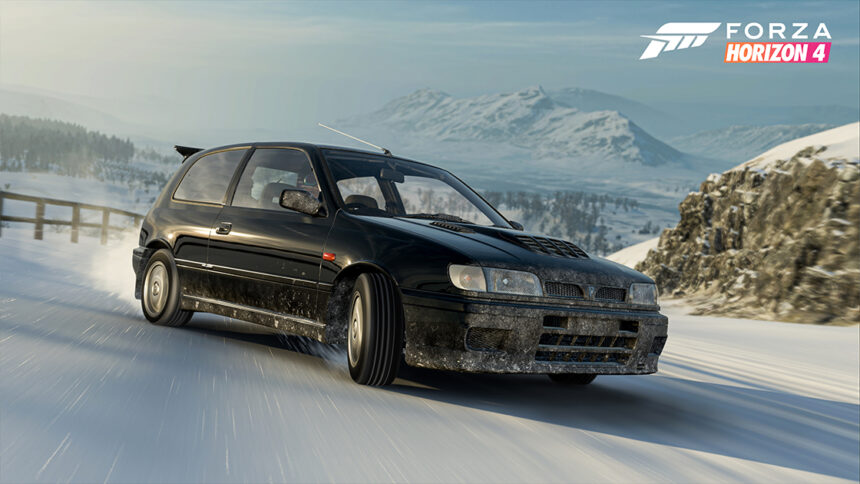 The sun is out once more, meaning Spring has made a welcome return to Forza Horizon 4 for another week. It’s the home stretch for Series 22, with one last helping of content for the month.

Our last Series 22 update for the Festival Playlist brings new and updated prizes for 50% and 80% completion. This week features another double helping, with a rare Nissan and an iconic Peugeot arriving in the UK. 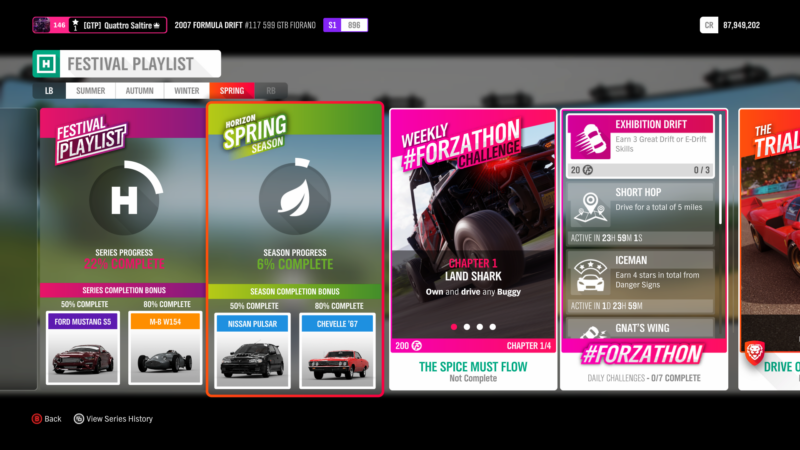 Pulsar and 205 Take The Reigns

Leading the way for Spring is the 1990 Nissan Pulsar GTI-R. This hot hatch is often forgotten about when it comes to rally homologation specials.

Although its competition lifespan failed to yield success, the Pulsar still has serious firepower even today. Under the hood sits a 2.0-liter turbocharged engine with a healthy 227hp. Unlike other 1990s hot hatches, the Pulsar is also fitted with the ATTESA four wheel drive system to get that power to the road.

If you’re after some more muscle, there’s the 1967 Chevrolet Chevelle. Before the Chevelle became an icon with the SS 454, this version sat in the shadows of the muscle car elite. Despite this, the 6.5-liter V8 still packs 375hp, and some modifications will further allow you to dust up the drag strip.

Prizes for seasonal championships this week include the Ferrari 512 S and the 1993 Ford Mustang.

The big standout comes in the form of the 1991 Peugeot 205 Rallye. Whilst the 205 GTI is arguably one of the greatest ever hot hatches, the Rallye version is an underrated cult classic in its own right. With a stripped out interior, the 205 Rallye weighs in at a scant 1,742lbs. Couple that to the 100hp, 1.3-liter engine, and the result is a car that wants to be thrashed through winding roads.

To get the 205, you’ll need to win the “Star Dew Rallye” championship.

There’s also a returning Showcase Remix for Spring. “Taxi for Takeoff” will see you step back into the Austin FX4 for Isha’s Taxis. Here, you’ll be racing to the Horizon Festival against an imposing Delta Wing jet aircraft.

Events and prizes for this week are below.

The Car In Front

The Trial: Drive On The Wild Side (Co-Op Championship) 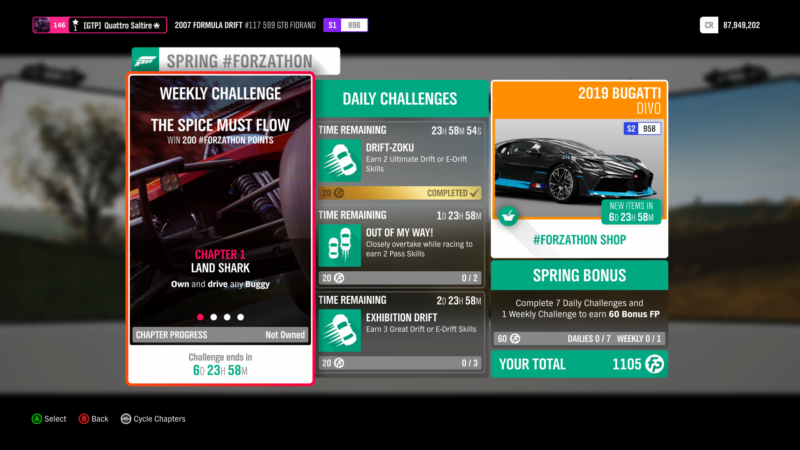 Forzathon this week is all about Buggies. Grab one off these offroad monsters to get things rolling.

Next, give the suspension on your buggy a workout by earning 10 Air Skills. Afterwards, take your buggy to the races and take victory in a Cross Country Series event at Castle Cross Country Circuit.

Finish off this weeks challenges by taking a high speed drive across the country. With 10 miles to cover, your chosen buggy should make fast and light work of the journey. 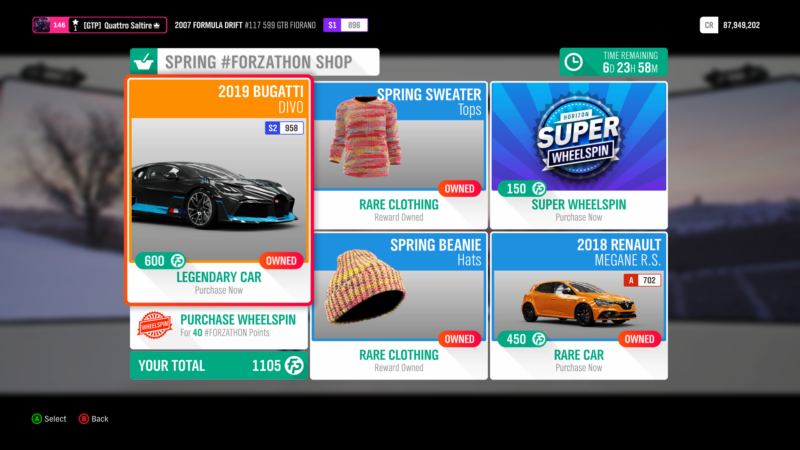 It’s all about France in the shop this week. Standing at the front is the 2019 Bugatti Divo.

Despite sitting on Chiron running gear, this is more than a simple rebody. The Divo has been designed to be more handling focused, and the aggressive new body produces more downforce than a standard Chiron. Sitting behind the Divo lies the 8.0-liter, quad-turbocharged W16 retained from the Chiron, with an explosive 1,479hp.

A bruising 600 Forzathon Points is the price tag for the Divo. If the Chiron is too common for you, then the Divo will make you stand out.

Also up for grabs is the 2018 Renault Megane R.S. Not only is the latest hot Megane one of the most powerful, it’s also one of the most sophsticated. Despite sharing an engine with the Alpine A110, the 1.8-liter turbocharged motor packs 276hp. With heavily tweaked suspension, handling should provide lots of fun.

The price you’ll be paying for the Megane is 450 FP. If you want one of the best hot hatches around, the Megane deserves to be in your garage.

Avatar cosmetic items this week include the Spring Sweater and the Spring Beanie.