The traditional series of Forza Monthly livestreams is gearing up for the May edition very soon, and Playground Games looks set to reveal more new content for Forza Horizon 4.

You’ll be able to catch the latest on the upcoming Series 36 update on Thursday May 27, and as usual PG has given us some closely cropped teaser images of one of the vehicles we can expect in the update.

A pair of exhaust tips may not give much away, but in combination with a front-end image posted on Instagram we can say that the car in question is the Saleen S1 — also known as the Saleen 1. 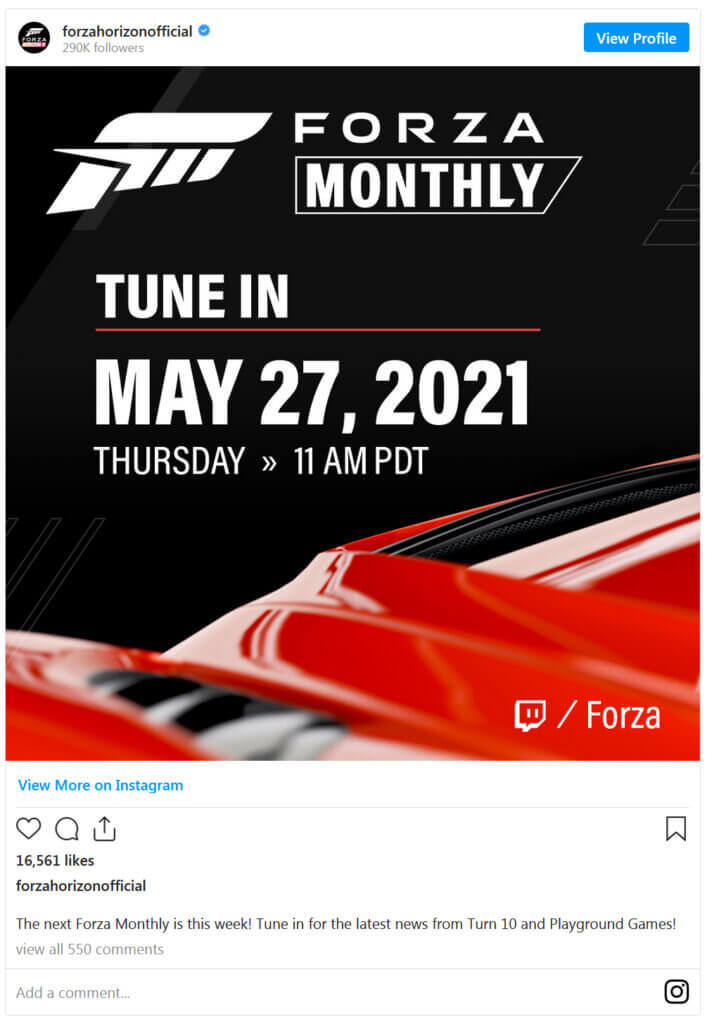 Unveiled at the LA Auto Show in 2017, the S1 would have been the first all-new car from Saleen since the stillborn S5S Raptor concept. We say “would have”, as it appears that Saleen hasn’t actually produced any road cars yet, despite running a Cup Series for a GT4 car based on the S1.

With a carbon body and aluminium chassis, the S1 excels in light weight, coming in at under 2,700 pounds. Instead of a V6 or a V8, there’s a 2.2-liter, turbocharged inline-four making 450hp, and that’s attached to a six-speed manual as standard. That means a 0-60mph time of 3.3 seconds and a top speed of 180mph.

While it may not be true supercar fast, the S1 may give rivals such as the Jaguar F-Type R and Porsche Cayman GTS a run for their money — though it’s not exactly cheap itself, starting at $100,000.

We won’t know entirely what the other cars coming to FH4 will be, but we can expect PG reveal all the details on May 27 during the Forza Monthly stream. You can watch the stream below when it kicks off at 1800 UTC.