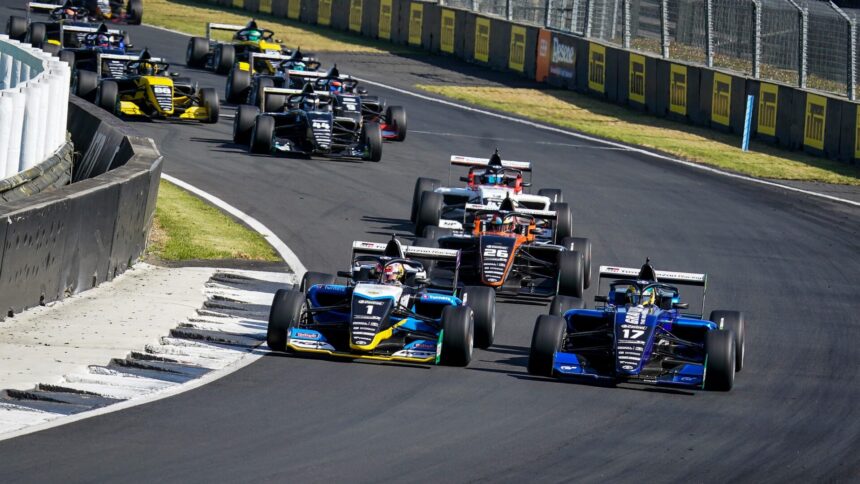 Brazil’s Igor Fraga endured a weekend of drama as big rival Liam Lawson retook the lead of the Toyota Racing Series. The GT Sport world champion had to fight from the back in the feature race, but takes the title challenge through to next week’s final round at Manfeild.

It was advantage Lawson after first qualifying, when the New Zealander took pole position ahead of Fraga for the first race at Pukekohe. Fraga however made the better of the starts and took the lead from the lights, but Lawson — never one to settle for second place — retook the lead on the opening lap.

The move left Fraga out of position somewhat, allowing Yuki Tsunoda to slip by into second. Despite two safety car periods, Fraga wasn’t able to take the place back from his Japanese team-mate and had to settle for another podium.

Race two was slightly further complicated from its usual reverse grid format thanks to several penalties hanging over from the first race. That left Jackson Walls on pole position, with his team-mate Peter Ptacek alongside. Fraga started in third, with Lawson next to him, and again the Brazilian lost out to a move from Lawson.

Giving racing room to the New Zealander, Fraga ended up dropping behind Tsunoda — again — and Cohen as he had to back out of the throttle. Although Fraga was able to recover to fifth place, he again had to settle for a finishing position one spot behind Lawson, trimming his championship lead to 11 points.

However it was an incident at the start of race three that swung the championship back into Lawson’s favor. The local driver had again out-qualified Fraga as the duo recorded Pukehoke’s first ever sub-minute laps, but Fraga once again made the better start. As they ran through the first complex practically side-by-side, fourth-place man Gregoire Saucy, who’d slipped up into third, hit Fraga’s rear end and shoveled him off the circuit.

That was the worst possible situation for Fraga’s title ambitions, with Lawson leading as he rejoined in plumb last. However he managed a remarkable recovery drive in a series that has seen overtaking hard to come by — aided by Saucy’s deserved penalty — to slice through the pack up to eighth and minimize the impact of the collision.

Nonetheless, the result gave Lawson his third feature race win from four and a tight, but useful, eight-point lead going into the championship showdown next weekend at Manfeild Circuit Chris Amon.

Three races now stand between Lawson, Fraga, and the TRS title. Whatever the result, the duo is set to resume their rivalry in FIA Formula 3 this summer with Super Licence points under their belt.