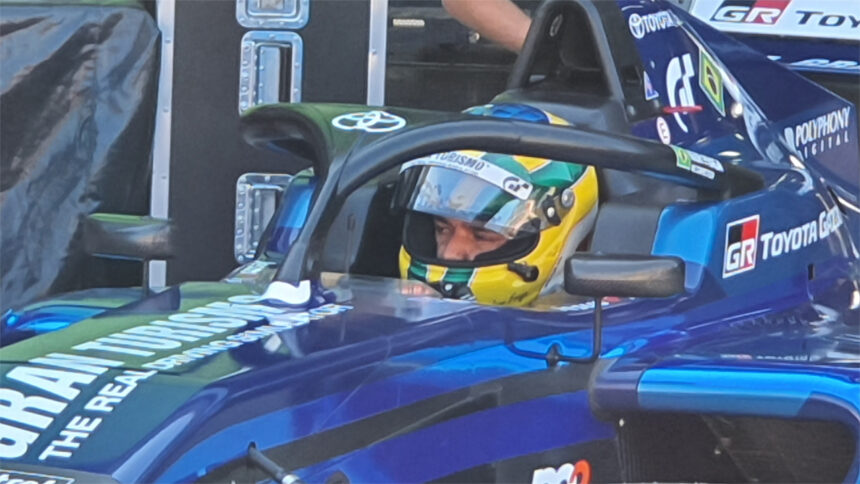 Brazilian GT Sport world champion Igor Fraga may currently be leading the Toyota Racing Series, but already his eyes are on the next stage of his motorsport career. This summer he’ll move up to his highest level of competition yet, in the FIA Formula 3 Championship.

Fraga’s no stranger to F3 cars. Both the TRS and the Formula Regional European Championship, in which he placed third last year, are F3 championships, using F3-grade cars. However FIA F3 is top of the pile as the only fully international F3 championship, shadowing Formula One as it flies around the world.

The FIA F3 car is also a slightly different animal. In TRS, the competitors use a Tatuus FT-60 F3 chassis, with a 270hp, turbocharged four-cylinder engine. For F3 that’s a 3.4-liter, naturally aspirated V6 good for some 380hp, packed into a Dallara F3 chassis. There’s a small weight difference, but the FIA F3 car is putting down 250hp/ton compared to the TRS’s 160hp/ton.

Charouz will field a three-man team in the 2020 FIA F3 Championship, including a Schumacher. David Schumacher, son of ex-F1 driver Ralf and nephew to Michael, finished one spot behind Fraga in the 2019 Formula Regional European Championship, winning four races. Experienced GP3/F3 and F2 driver Niko Kari takes the third spot.

The racing starts at the Bahrain International Circuit on March 21, and the season will support F1 across nine races until its climax in Russia on September 27.

Thanks to Nismonath5 for the featured image!

Formula 3Igor Fraga
15 Comments Discuss this post in our forums...
Test Your Badge Knowledge With Our Car Logo Quiz

Formula One 171 Mar 3 by Andrew Evans
Aston Martin will be making its return to the F1 grid this season after 60 years away, and has today unveiled the car it will use for the 2021 season.…

Formula One 171 Mar 2 by Andrew Evans
In the second of today’s two F1 car launches, the technically new Alpine outfit has revealed its A521 contender for 2021. It’s the first ever F1 car to wear the…

Formula One 171 Mar 2 by Andrew Evans
Defending seven-time world champion Mercedes-AMG has revealed the car that most will expect to take the 2021 title too. It’s called the W12, and no Mercedes hasn’t gone crazy and…

Formula One 171 Feb 23 by Andrew Evans
Red Bull is the latest team to unveil its car for the 2021 Formula One World Championship, taking the covers off the RB16B today. As the name might suggest, the…

Formula One 171 Feb 22 by Andrew Evans
The Alfa Romeo team has become the third to reveal its car for the upcoming 2021 Formula One season, which it calls the C41. As we’ve seen so far with…

Formula One 171 Feb 19 by Andrew Evans
Red Bull’s junior F1 team, Scuderia AlphaTauri, has become the second team to reveal its 2021 challenger. The car, officially known as the AT02, follows on from last year’s race…