The roll call of names for high level racing drivers who’ve learned their craft on Gran Turismo is impressive – Jann Mardenborough, Lucas Ordóñez, Wolfgang Reip, Florian Strauss – but from 2016 though it seems we’ll have to add a new name to that list: Bob.

Reportedly using an advanced version of Gran Turismo’s AI algorithms, our information suggests that Polyphony is aiming to compete in the fully autonomous “Roborace” series, a support race for FIA Formula E. Using what it calls “First Generation Advanced Prototype Racing” (APR1) programming, the Polyphony AI will have to duke it out with driverless tech from vehicle manufacturers around the world. 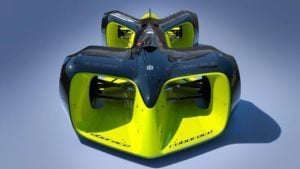 Of course Polyphony has been programming AI for the Gran Turismo series for almost 20 years and in recent iterations of the game you’ve been able to train and micromanage your own versions of the AI in a game mode called “B-Spec” – so players have taken to calling the driver “B-Spec Bob”. With two decades of experience creating AI that can deal with high-speed racing, Polyphony should be confident.

A spokesman at the unveiling of the Roborace car commented “This new APR1 software will calculate the best racing line at any moment and stick to it, forcing the other cars to try and find a way past. Should any contact occur, the opponents will always receive a 5 second time penalty anyway.”

Other racing game makers have also been trying to get involved in the series, though it’s been reported that some key rivals’ AI would not be able to compete in races with changeable weather or day/night cycles.