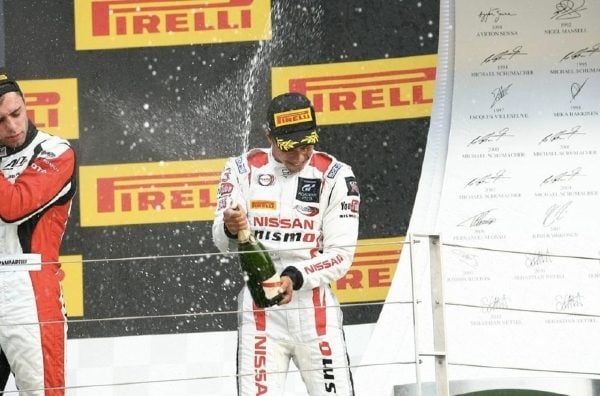 Jann Mardenborough had another successful weekend in the GP3 Series, taking a podium finish at the Hungarian round of the championship.  The young Brit had to work hard in Saturday’s race – he qualified in 13th place after a red flag stopped his fastest run – but he got stuck in and took a very creditable seventh.  This put him on the front row of the grid for race two on Sunday.“I didn’t get as good a start as yesterday and Patrick (Niederhauser) got the jump on me,” explained Jann. “I settled in to third place and managed to hold onto it for the full race, despite the pace not being as good as yesterday.“It’s great to get a podium, and of course last week’s win, which takes me into the summer break with lots of new points.  This also builds my confidence for the next round at Spa so I can’t wait for that to come around now.” 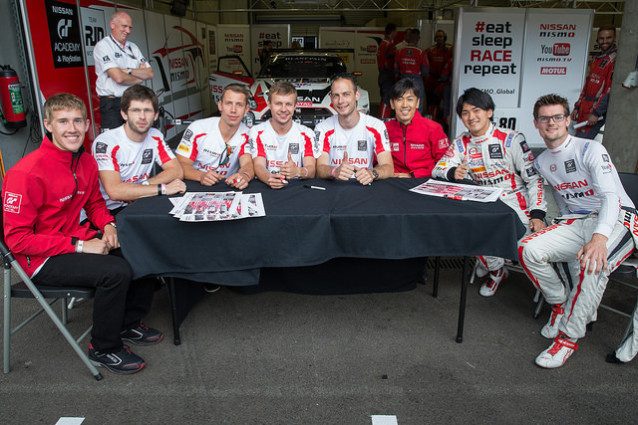 Meanwhile, the Nissan GT Academy Team RJN GT-Rs have made it to the end of one of the toughest Spa 24 Hours in recent times.  The No.80 Nissan GT-R NISMO GT3 of Alex Buncombe (GB), Wolfgang Reip (BEL), Florian Strauss (GER) and Nick McMillen (USA) took the chequered flag in 13th position in class and 25th overall after 24 hours of hard graft.  The sister No.35 GT-R of Katsumasa Chiyo (JAP), Mark Shulzhitskiy (RUS), Miguel Faisca (POR) and Masataka Yanagida (JAP) also finished the race in 38th place overall and 19th in the Pro-Am class.It was Reip and Chiyo who took the start of the race in numbers 80 and 35 respectively after taking fourth and seventh in class in Saturday’s Superpole shootout. Those class positions put them in 13th and 19th positions overall on a grid of over 60 GT3 cars. 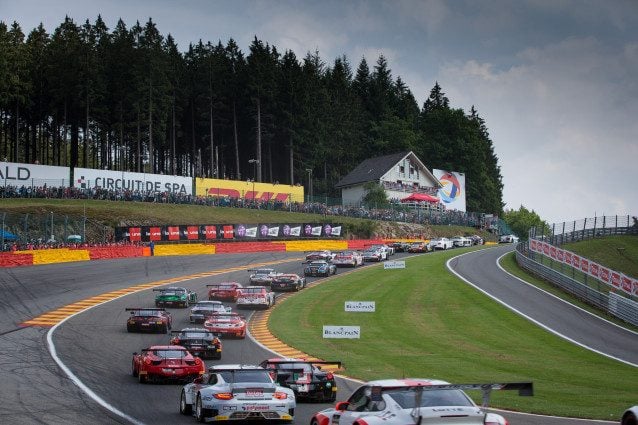 The early part of the race was marred by serious accidents, which kept the two safety car drivers fully employed. The No.80 Nissan GT-R managed to avoid the drama but only because Buncombe proved himself capable of some incredibly fast evasive action when he was almost wiped out through Eau Rouge. Chiyo was less fortunate and was hit by a Porsche at the Bus Stop Chicane during his first stint, which put the No.35 GT-R in the garage for 1.5 hours while the team repaired some suspension damage. 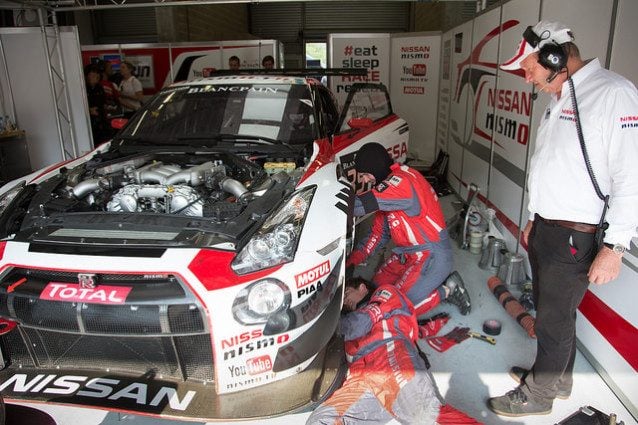 After four safety car periods the race was red flagged at 21:25hrs to give the safety team the time and space they needed to help the driver of the No.111 Ferrari after an alarming accident at Stavelot.  At 22:25 the race was restarted and by the six-hour mark the no.80 GT-R was 16th overall and seventh in class. After it’s lengthy stop the No.35 GT-R was lying 52nd overall and 25th in class. 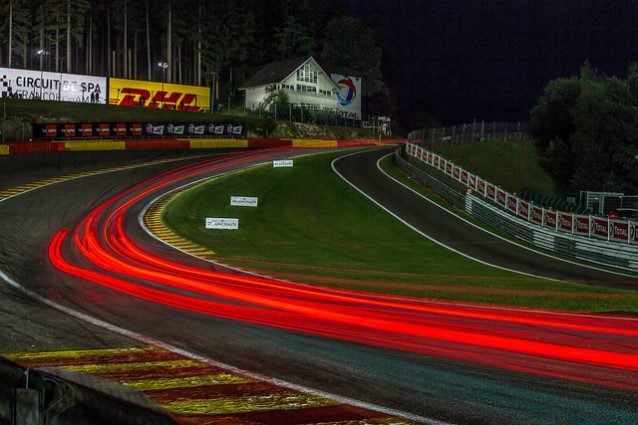 It wasn’t until darkness fell that the race really settled down. With no more big accidents the drivers were able to finally get into the rhythm of the race and for the two Nissan GT-Rs it was time to begin the fight back. 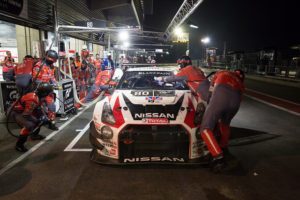 The early accident put the No.35 right to the back of the field and, as the team circulated through the driving squad, the GT-R steadily climbed back up the order but it was a hard slog.  From 25th in class at the six-hour mark to 23rd after 12 hours, to 19th at the finish.  The fight back wasn’t helped by punctures but there were no more major troubles for No.35.

“Everyone knows this is a hard race,” said the man who took the chequered flag in the No.35 GT-R, Mark Shulzhitskiy.  “We had bad luck at the start with the contact with the Porsche and after that we tried to stay out of trouble, be consistent and gain as much as we could.  It was a good result for me as I didn’t finish here last year. Next year will be better.” 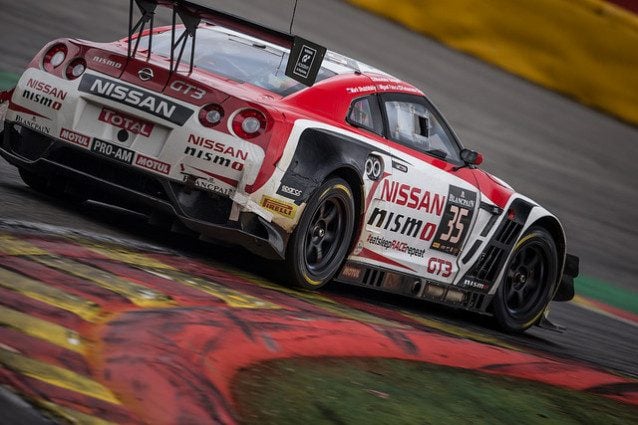 The No.80 GT-R was seventh in class after six hours but had fallen to 16th by the halfway mark.  This is because of a brake change and then a further brake change that was needed due to a punctured tyre rupturing a brake hose.

It was local man and 2012 GT Academy Europe winner, Wolfgang Reip, who took the fastest time of the race in the No.80 Nissan GT-R NISMO GT3. 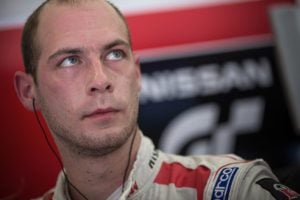 “It was great to race at Spa in the GT3 GT-R,” said Reip. “We showed in qualifying that we had the pace as we were comfortably through to Superpole.  I took the start and it was immediately obvious that with the higher temperatures, the car just wouldn’t work in the heat.  During the night when I did two double stints the situation switched as the cool temperatures made the car handle like magic. Despite us having the brake issue, which probably cost us a Pro-Am podium I really enjoyed racing here at Spa.”

“That was one of the toughest 24 hour races we have ever done,” said NISMO’s Darren Cox. “Having said that at least we got our cars and our drivers back in one piece.  All of our best wishes go to everyone who was less fortunate than us. We can take some positives out of the race though. Our newest NISMO Athletes got a good amount of track time so they should be on great form when we get to the Nurburgring 1000kms in September.  This race was great experience for them as it is a tough track and they were racing within a world-class field.” 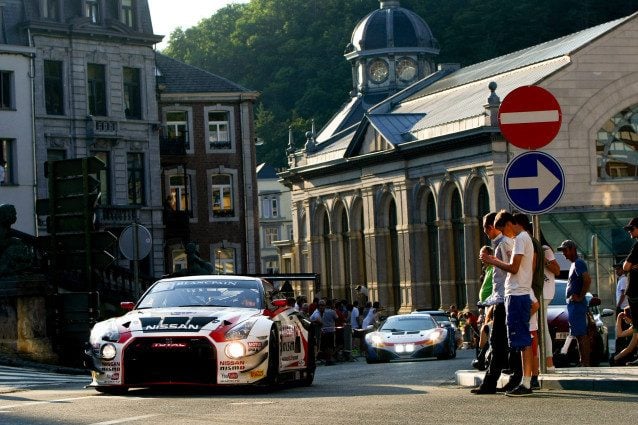