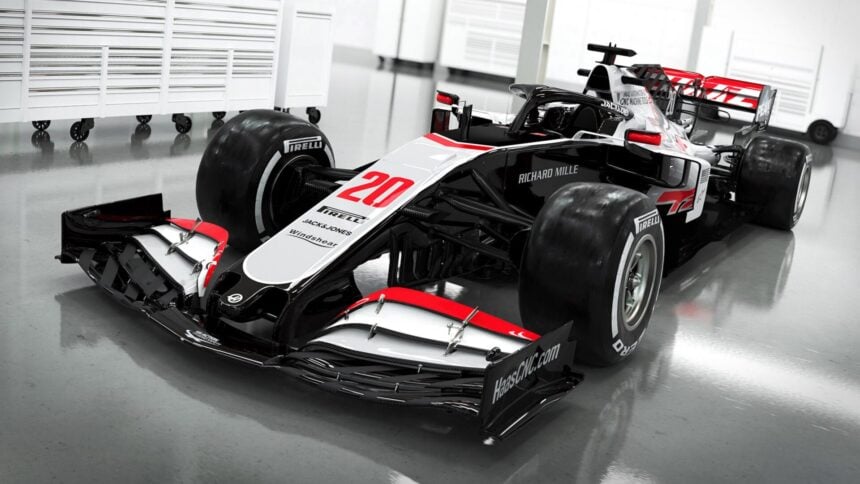 Haas is the first Formula One team to break cover on its 2020 contender, the VF-20, and it wears a familiar livery.

Coming off fifth place in the constructors’ championship in 2018, it was all downhill for the American team in 2019. With an unpredictable car, last season was one to forget for Haas. At the end of it all, the team fell to ninth place in the championship with a measly 28 points. Danish driver Kevin Magnussen lead team-mate Romain Grosjean home in the driver standings, but in 16th and 18th places respectively.

The team has released digital renderings of this year’s chassis ahead of its official reveal later this month, and 2020 looks to be a fresh start for Haas.

It should be immediately apparent that the car has new colors, reverting to the more traditional Haas colors of white, black, and red. The black and gold livery, representing its former, rather controversial title sponsor Rich Energy, is no more. That follows a saga which should merit some choice words from team boss Gunther Steiner in season two of Netflix’s F1: Drive to Survive.

With the technical rules merely massaged for 2020 — ahead of the major changes in 2021 — the VF-20 is, as expected, an evolution of last year’s effort. The car is hopefully more radical under the skin, but there are some big changes at first glance.

There’s a new airbox intake, triangular rather than oval, and the high rake angle of the car suggests some changes around the rear end — addressing the VF-19’s issues in low-speed corners. Haas also appears to have reworked the front wing back towards an unloaded outboard profile, as with the VF-18, for more consistent front downforce.

Steiner, who became somewhat of a star during 2019 for his appearance in the Netflix series, is hopeful this year’s car will do what last year’s couldn’t: be competitive.

“It’s always exciting to see the development of a new Formula One car and undoubtedly the VF-20 has to deliver where our previous car didn’t. With the regulations remaining stable into this season, it’s allowed us to improve our understanding of the car and to scrutinize ourselves more in order to find solutions and applications to channel into the design of the VF-20.

Last year was definitely a set-back, one I would never have asked for, but you learn from such situations – we all have. Everybody at the team was forced to look at themselves and understand what they can do better. I’m looking forward to seeing the VF-20 make its track debut. As always in testing, you want many things, but lots of mileage, reliability and speed would be welcomed as we ready ourselves for the first race in Australia.”

Haas will reveal the real car in Barcelona on Wednesday, February 19, one hour before winter testing begins. Magnussen will get behind the wheel on the first day, with Grosjean taking over the following day. Both drivers will split duty on the final day of testing.

F1 2020 SeasonHaas
11 Comments Discuss this post in our forums...
Test Your Badge Knowledge With Our Car Logo Quiz