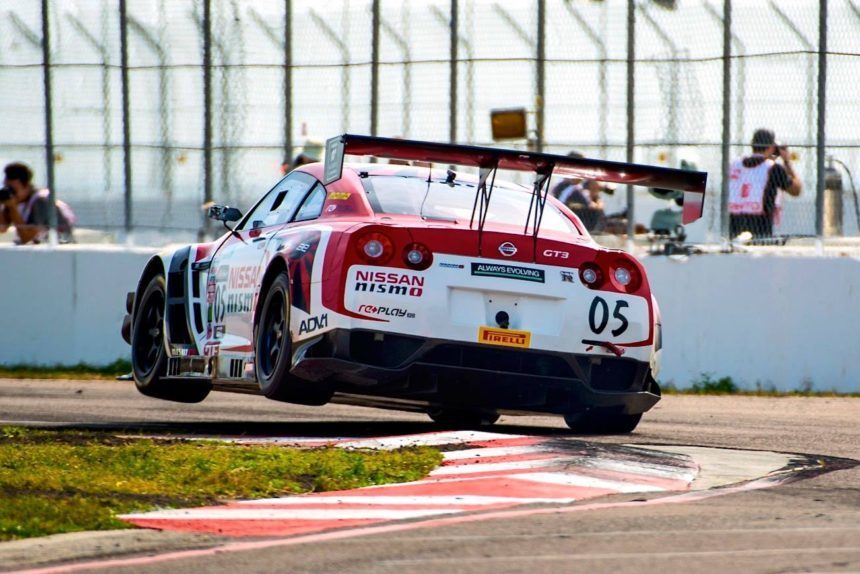 It wasn’t all sunshine and smiles in Florida this past weekend. After a solid season opener the week before in Texas, Heitkotter and teammate JD Davison faced stiff competition on the tight street circuit of a cloudy St. Petersburg. While outright victory would evade the GT-R’s in Florida, the two drivers made points progress nonetheless, including a podium finish.

The first race of the weekend saw Michael Lewis start his Porsche 911 GT3 R on the inside of the front line, with Alvaro Parente’s McLaren 650S beside him. Round 2 winner Johnny O’Connell lined up behind the Porsche, while 17-year old Austin Cindric would start directly behind his McLaren teammate. JD Davison placed the first of the GT-R’s in the sixth starting block, with Bryan two rows back in 10th.

Lewis had a strong start and never looked back, consistently extending his lead over Parente to score his first PWC win. The Cadillacs continued their run of consistency in third and fourth, with O’Connell leading Cooper by less than a half-second across the line. Cindric rounded out the top five in the first race. Davison suffered a damaged rear wing, the tented appendage dashing hopes of a high finish for Saturday shortly after the half-way point of the race. Check it out from Jon Fogarty’s view, who would go on to take his McLaren to sixth:

Patrick Long’s team worked around the clock to get the Round 1 winner’s car in fighting form for the weekend. While he missed Friday’s qualifier (and would therefore start way back in 19th), Long nonetheless drove the 911 like a man possessed, earning two awards en route to a seventh-place finish. Heitkotter would go on to finish the race in 9th, holding off the Acura of Ryan Eversley.

Sunday’s race was rather more chaotic, with 29 laps being completed versus Saturday’s 40. Davison supplanted Cindric in 4th on the grid, while the three ahead of him remained the same as Round 3 (Lewis in first, Parente in second, O’Connell in third). Heitkotter would again start in tenth. An accident on Lap 2 in the GT Cup class brought out a full-course yellow while the track barrier was repaired. With 18 minutes remaining, the green waved again, and Davison remained resolutely locked to the back of Lewis’ car. Long had moved up to third, with the Cadillac duo harrying closely behind.

The battle for sixth between Parente, Eversley, and Andrew Palmer in the #87 Bentley heated up, right to the point of contact between Parente and Palmer. With the McLaren spinning, oncoming racers did their best to avoid getting collected in the accident, but the K-Pax team caught another bit of bad luck as Cindric’s 650S kissed the barrier, and another full-course yellow came out.

Heitkotter avoided the mess, but with only two laps remaining when the caution was lifted, couldn’t climb out of 15th. Teammate Davison remained in second, bringing home another podium finish for the team in as many weekends, while Lewis saw back-to-back wins in St. Petersburg. Cooper and O’Connell would bring the Cadillacs home in third and fifth respectively, while Long held on to fourth.

The series now takes a month-long break, before heading to the streets of Long Beach on April 15th. You can catch the action live on the PWC streaming page.

Bryan HeitkotterNismo AthletesNissanNissan GT-RPirelli World Challenge
The original comments for this post are no longer available.
Test Your Badge Knowledge With Our Car Logo Quiz

Esports 104 Apr 12 by Andrew Evans
Just like the real thing, F1 Esports has something of a gender imbalance. In four seasons to date, no female driver has ever taken part in an official F1 Esports…