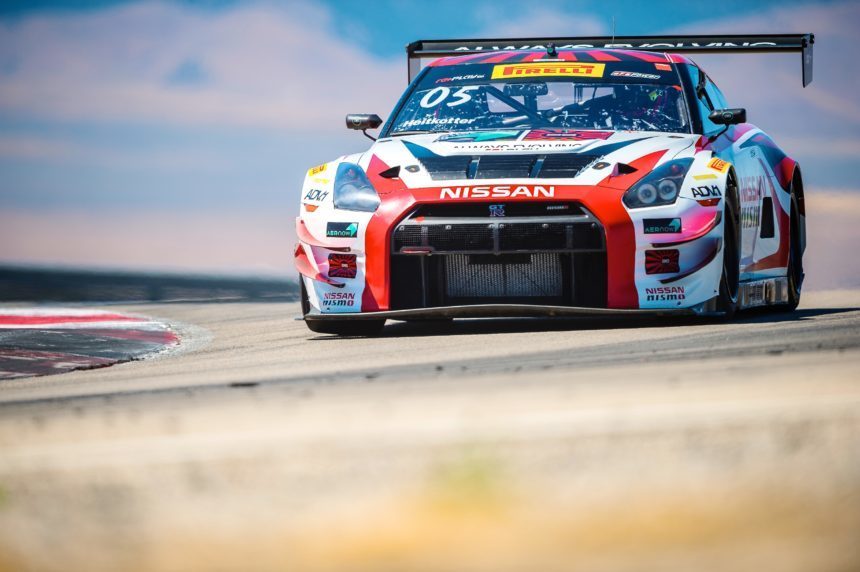 Last weekend saw a landmark achievement for one of the most promising graduates from the GT Academy programme, as the 2011 U.S. winner Bryan Heitkotter was able to to take his first overall win in professional motorsport — which was then swiftly backed up by a second win the day after.

Salt Lake City in Utah played host to the latest round of the Pirelli World Challenge, as the GT championship leader Alvaro Parente looked to stretch his advantage at the top of the standings over Porsche factory driver Patrick Long, entering the weekend with 1308 and 1213 points respectively. Practice was dominated by the K-PAX 650S GT3 of Parente, which eventually led to a sixth pole position for Saturday’s encounter, a qualifying record which no other driver on the grid has been able to match this season.

Race one, round 16 of the championship, saw an early coming together for the polesitter Parente and second-placed Michael Cooper, which quickly opened the door to the Always Evolving Replay XD Nissan GT-R GT3 of Bryan Heitkotter. In seizing the lead he was then able to open up a considerable gap over the rest of the field, peaking at seven seconds, which enabled him to take a comfortable win. Pat Long was not able to fully capitalise on Parente’s incident, getting held up by the contact himself — a determined drive saw him drive from a low of eighth place to achieve a podium finish in third. Bentley Team Absolute’s Adderly Fong produced an impressive performance to take the second step on the podium from fourth.

Sunday saw round 17 of the GT championship take place, and Heitkotter was able to convert a second place start to a second win of the weekend in a tense race. Fong and Long were once again second and third on track, but the first half of the race saw both applying tremendous pressure to the number 5 GT-R of Heitkotter, with all three cars forming a nose-to-tail train at the front of the field. However, the challenge quickly faded as traffic started to play a significant part in the race. The lead stretched out to just over a second before the flag fell, with the podium order remaining the same from the day before.

Bryan’s delight was evident, as he simply stated “I’m just so happy to be a part of this team,” describing his experience with Always Evolving and Nissan as a “dream come true”. The results mean Bryan sits eighth overall in the standings. The second Always Evolving Nissan GT-R GT3 was being driven by British talent Craig Dolby, who made his U.S. debut at Utah – achieving two top-ten finishes, he also topped Sunday morning warm-up, highlighting his potential as a candidate for a full-time seat in 2017.

The PWC heads to Sonoma next, where Heitkotter plans to make “good gains” late in the championship. Keep up to date with all of Bryan’s progress for the remainder of the season on GTPlanet’s news page.

Bryan HeitkotterGT AcademyNissanNissan GT-RPirelli World Challenge
The original comments for this post are no longer available.
Test Your Badge Knowledge With Our Car Logo Quiz