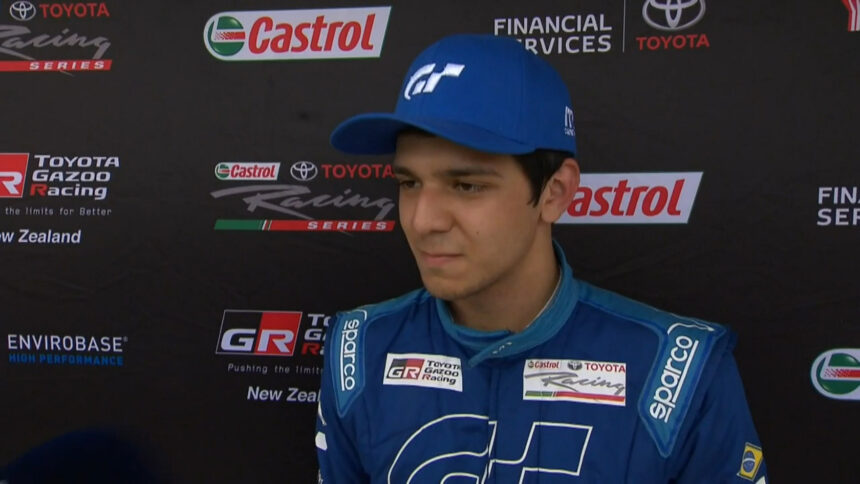 The TRS is a Formula 3 category, awarding Super License points to the top five finishers, using a new-for-2020 car. Featuring a Tatuus-manufactured FT-60 F3 chassis, with a turbocharged, 270hp Toyota engine, it’s a format that should be familiar to Fraga from his 2019 campaign in Formula Regional Europe.

Less familiar are the circuits. TRS takes place entirely within the confines of New Zealand, with five races across five successive weekends. The first event is this weekend, at the figure-8 Highlands Motorsport Park in Cromwell.

Fraga started the weekend with a good showing in qualifying. The Brazilian driver placed his M2 Competition #17 car in fourth place on the grid, two spots behind teammate Liam Lawson — the TRS champion from 2019. Countryman Caio Collet put his MTEC Motorsport car on pole with 1’28.105 lap of Highlands, 0.8s quicker than the circuit lap record set by Lawson last season.

Although missed on the stream, Fraga jumped third-placed Lirim Zendelli at the start to move up into a podium spot. The quartet largely held station for much of the race, however the cars all closed up following a safety car period caused by Sweden’s Henning Enqvist solo crash at the bridge. By the time the safety car — a Toyota GR Supra, of course — peeled in, it was the final racing lap. A last lap sprint saw Collet preserve his lead over Lawson, with Fraga coming home third.

However, again missed from the stream, Collet made an illegal practice start on the race warm-up lap. A protest from M2 Competition resulted in the stewards garnishing the Brazilian’s race time with a five-second penalty, dropping him to 7th. This promoted Lawson and Fraga to an M2 1-2.

The action resumes Sunday with two more races: another 15-lap race; followed by a longer feature race which awards the Dorothy Smith Memorial Cup. Motorsport.tv has both races scheduled for a live stream, with Race 2 at just after midday local time (2300UTC January 18) and Race 3 four hours after (0300UTC January 19).

Igor FragaToyota Racing Series
113 Comments Discuss this post in our forums...
Can You Beat the Impossible Gran Turismo Quiz?