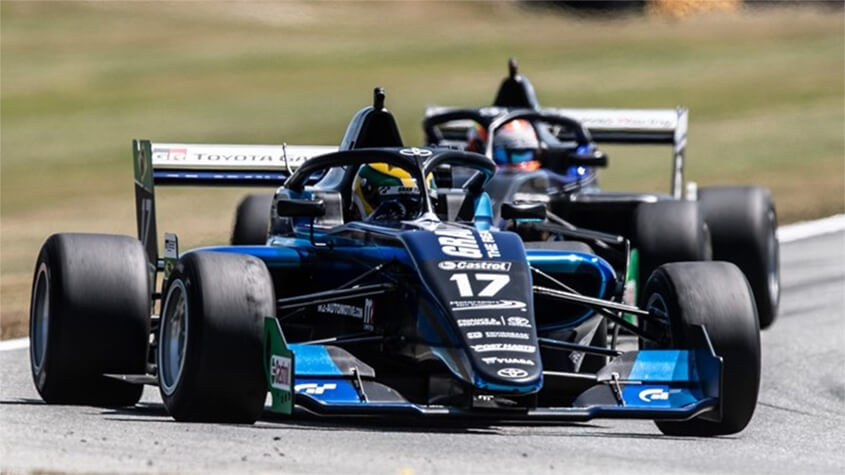 2018 GT Sport world champion Igor Fraga has continued his impressive start to 2020 with another pair of podium finishes in the Toyota Racing Series (TRS).

The TRS is an open-wheel, Formula 3 category which takes place entirely within New Zealand over five consecutive weekends. It’s the country’s highest level of motorsport, and many famous drivers have passed through TRS on their way up to Formula One and LMP1. The highest-placed drivers gain super license points which can stack with those won in summer series, and — via a partnership with Road to Indy — can participate in Indy Lights tests later in the year.

After last weekend’s performance at Highlands, Fraga entered this weekend second in the championship behind his team-mate and TRS champion Liam Lawson.

The Brazilian started the weekend in the best possible way. After topping the timesheets in Friday practice, he won pole position for race one in an unusual qualifying session. Following a crash in which Chelsea Herbert sustained back injuries severe enough to end her participation in the series, Fraga grabbed the top time in a three-minute qualifying session.

As the lights turned green, Switzerland’s Gregoire Saucy made the better start from alongside Fraga, but it was Caio Collet — who’d had a round to forget at Highlands — who hit the front by sweeping around the outside of both cars. That essentially set the finish order for the front three, but it was Liam Lawson’s performance that was significant in championship terms. The New Zealander started 13th, but came home sixth to keep his lead.

Race two is the reverse-grid draw race in TRS, and that went to Emilien Denner who’d finished in eighth. That put Fraga in a sixth-place start, three places behind his championship rival. Frenchman Denner, racing in only his fifth race in cars following a stellar career in karting, took the lights-to-flag victory. Unlike race one, Collet couldn’t repeat his first lap heroics, and Lawson couldn’t make any further progress up the field, and the top six finished as they started.

A second qualifying session determines the grid order for race three, and this time it was Jackson Walls who took the honors. Fraga, who had been top with only one lap left had to settle for third, behind Walls and — who else — Lawson. The home favorite blitzed the start and left everyone else in his wake while Fraga almost repeated Collet’s move from race one but had to slot in behind American Walls. However Walls made an error and a trip through the dirt let Fraga through into second and Yuki Tsunoda into third.

Fraga set a few fastest laps in the chase, but Lawson responded to come home with the Spirit of a Nation Cup. A fourth podium for Fraga sees him maintain second in the championship, 18 points behind his team-mate and 17 points ahead of Saucy.

The action moves on to Hampton Downs next weekend, where the GT Sport champion will no doubt hope to make a dent in that lead.

Igor FragaToyota Racing Series
114 Comments Discuss this post in our forums...
Test Your Badge Knowledge With Our Car Logo Quiz