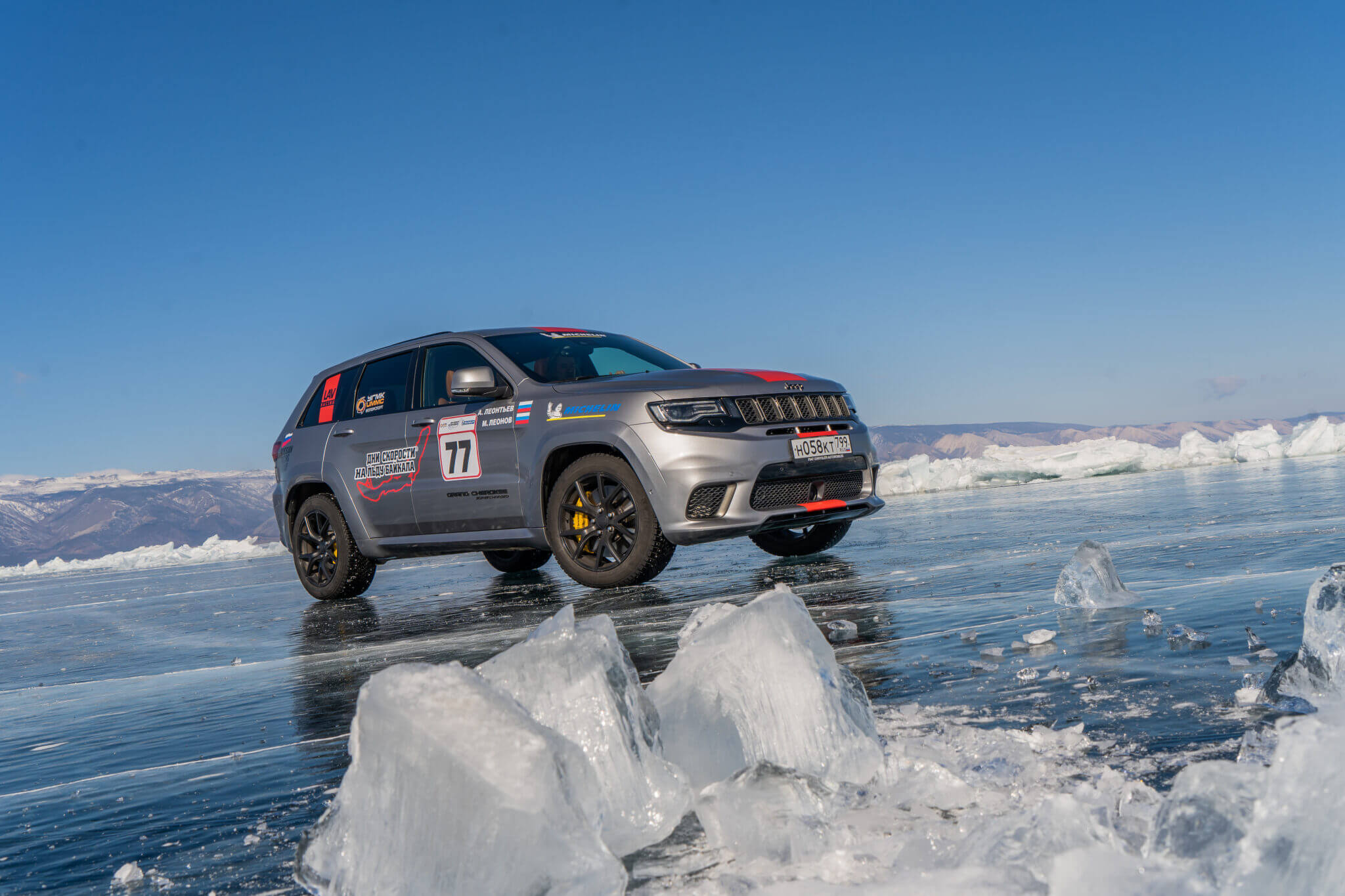 At this year’s Baikal Ice Motor Sports Festival, Jeep proved that its Grand Cherokee Trackhawk is the fastest SUV in the world. Well, on ice at least.

If you’re not familiar with Lake Baikal, it’s an enormous rift lake located in Russia’s Siberia region. Baikal doesn’t look that big compared to Lake Superior, but it’s more than a mile deep so it’s the largest freshwater lake in the world by volume.

Since it’s in Siberia, Baikal can also get pretty cold. For about five months of the year it’s completely frozen over and in some parts the ice measures seven feet thick.

That makes it the perfect place for ice racing — a long ribbon of incredible thick, solid ice. The Russian arm of the Federation Internationale de l’Automobile (FIA) has held the Speed Days of the Baikal Ice Motor Sports Festival there since 2011. 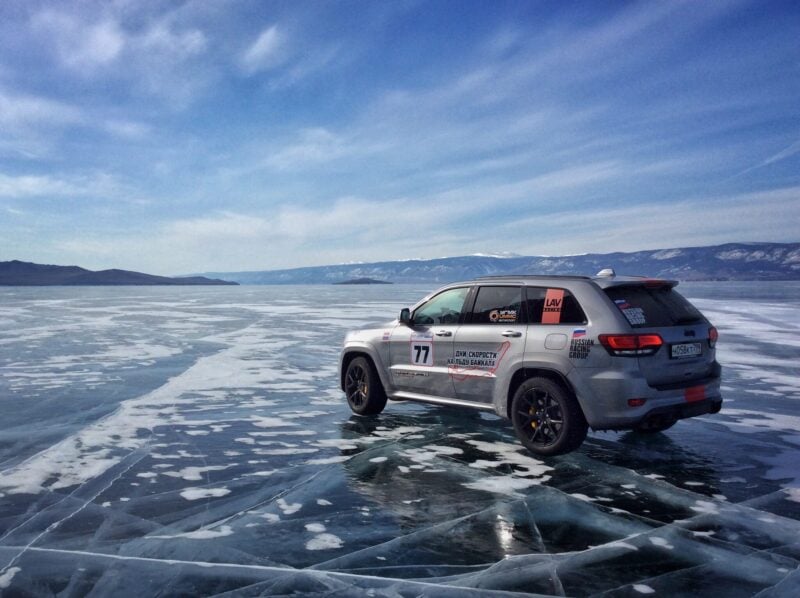 At this year’s event, Jeep showed up with its Grand Cherokee Trackhawk. Packing 707hp from its 6.2-liter V8, with the help of a supercharger, its performance credentials aren’t really in doubt. However it needed to go fast in some pretty tricky conditions. Driving on solid ice is already no simple task, but the direct Siberian sun causes a thin film of water on the surface too.

The specifics of setting ice speed records is a little complicated. In total, allowing for braking, the course measures over seven miles in length. First the cars perform a 1km (0.62 mile) standing start pass, with the FIA measuring the car’s average speed over the distance. Then the rules allow the car to accelerate to maximum speed for a flying kilometer, again with the officials taking the average speed over that distance. To verify the records, the car then needs to do the same thing in the opposite direction. The FIA also measures each car’s maximum speed on both runs.

Jeep’s Trackhawk scored impressive numbers by all three conditions. Its standing start average came in at 62mph, while it clocked a two-way average of 160mph. The hefty Jeep came pretty close to its rated top speed of 180mph too, with an average top speed of 174mph. That meant it became the fastest ever SUV on ice in all three categories. 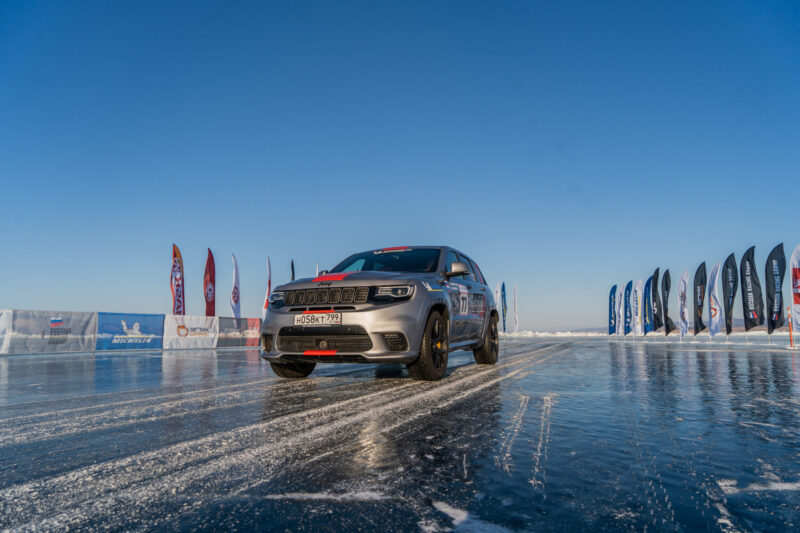 To achieve this the Trackhawk was pretty much stock too. According to Jeep, it stripped all the unnecessary weight out of the vehicle before setting off. While it does not say exactly what those items were, chances are it covers things like the spare tire and floor mats. There’s no Nurburgring-style shenanigans here — the Trackhawk used here has a full interior.

Jeep did make one concession to the conditions though. Just to keep everything pointing the right way, it fitted studded winter tires to the Trackhawk. We’d take a guess it also put the drive mode selector into the Snow setting…

If you’re wondering what the outright top speed record is on ice, that happened back in March. A tuned E30 BMW M3 with a Toyota 2JZ engine hit 215mph, also on a frozen lake, at the Swedish Speed Week in Årsunda.

Andrew Evans · May 3, 2019· Comments
Gran Turismo series partner Toyota has revealed a special, limited edition version of its Toyota Yaris hatchback, which not only bears the Gran Turismo 7 name but comes with a free copy of the game and a PlayStation 5 console.

Andrew Evans · May 3, 2019· Comments
After it surprisingly revealed a new car at the Consumer Electronics Show (CES) in 2020, Sony has taken the covers off a second model at this year’s show — and it looks like it might be planning to build them.

Andrew Evans · May 3, 2019· Comments
Porsche has officially taken the covers off its Vision Gran Turismo car, designed specifically for Gran Turismo 7 when it launches on March 4.

Andrew Evans · May 3, 2019· Comments
MG’s specialist design center, SAIC Design in London, has created a new concept car that’s not only inspired by gaming, but a games room itself.

Michael Leary · May 3, 2019· 13 Comments
Although Lamborghini has now officially pulled the wraps off its latest nostalgia project, the Countach LPI 800-4, you’re already too late to buy one.

Andrew Evans · May 3, 2019· 21 Comments
Genesis has unveiled a trio of new racing car concepts designed in collaboration with Gran Turismo, destined to take their places in the racing game series in the near future.

Andrew Evans · May 3, 2019· Comments
Nissan has taken the covers off the latest model of its flagship performance car, the GT-R Nismo, ahead of its market launch later this year.