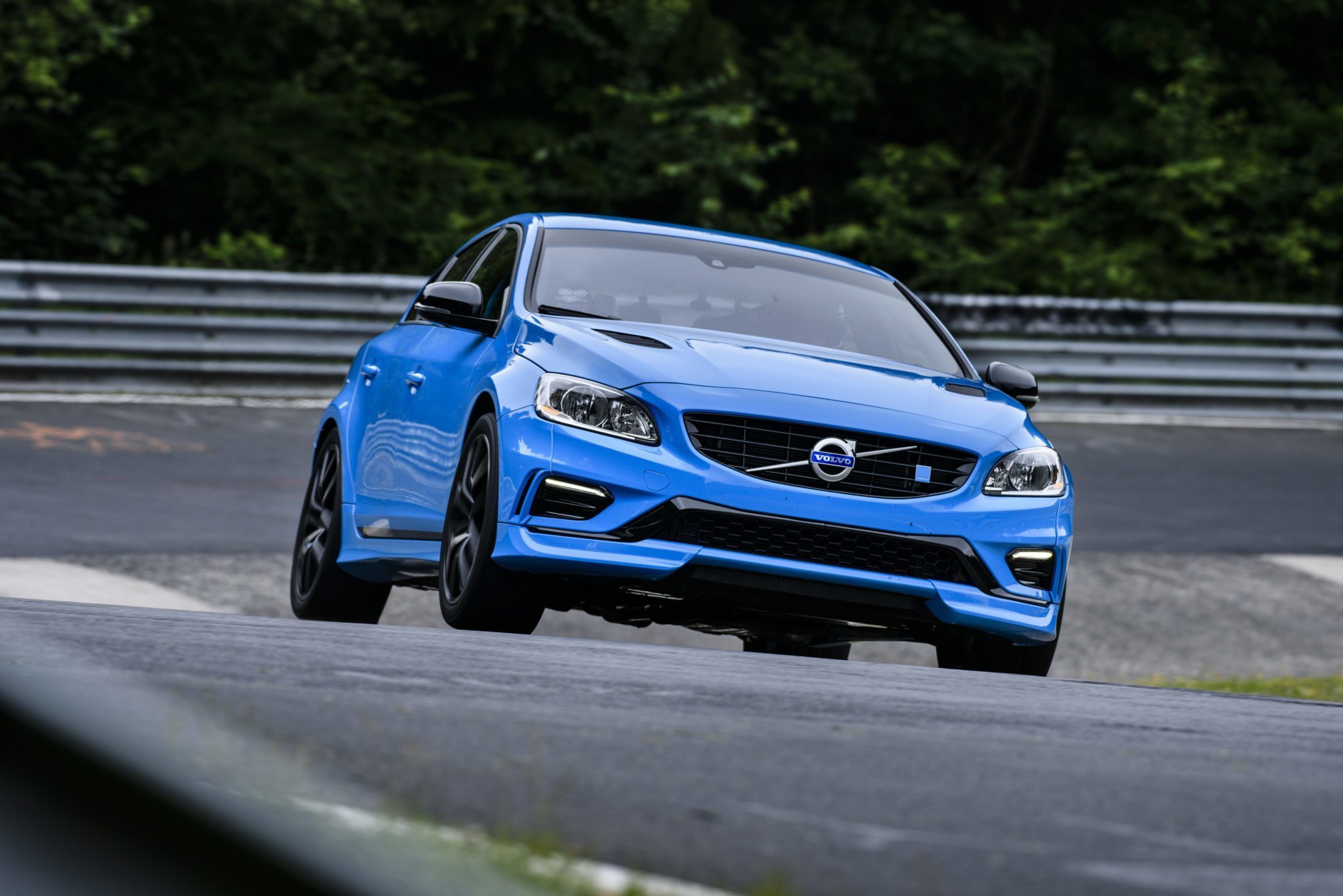 Barely a week seems to go by these days without a car manufacturer boasting about its Nürburgring lap time.

And let’s be clear on this, the Nürburgring is a bloody brilliant place to do this if you’re European. The 6-yard wide track is like any normal two-lane road and the lumps and bumps of the kerbs replicate the undulations of our road surfaces. A car that’s comfortable around the ‘Ring will be comfortable everywhere. One that’s fast around the Green Hell will be fast down the B1257.

But these are qualitative terms, and where the problem starts is in carmakers saying exactly how fast a car is.

Announced with great fanfare and florid press releases, each claimed the car to be a definitive performance benchmark. There is rather a significant problem with this though: it’s all drivel.

Let’s look at the McLaren claim first. This car set a lap time of 6:43.2, although you’ll spot from the video that timing started and finished at different parts of the lap.

It’s important to note that the claim doesn’t come from McLaren, rather the Lanzante racing team. The reason for this is that Lanzante makes the P1 LM, based on the P1 GTR. The GTR isn’t road legal — it’s McLaren’s track toy version of the P1. The company fits a fixed wing, plastic windows, slick tyres and gives it more power, paying homage to the F1 GTR.

Lanzante took that F1 GTR to an overall Le Mans victory in 1995, then converted five of them to become road legal. It’s doing the same thing with the P1 GTR, creating only five. Could you class a handful of modified racing cars as a production car? You decide.

Regardless, it was the XP1LM, a pre-production mule, that set the 6:43.2 lap time during a Nürburgring development session. Although Lanzante did drive it back to Britain on public roads after the run, which is more than we can say for most. 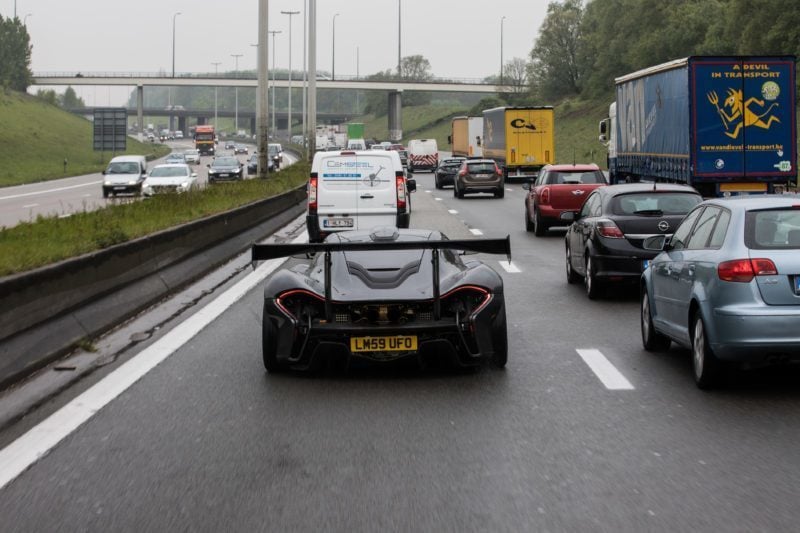 Is The Record Intact Then?

The McLaren displaced an unusual Chinese electric car, known as the NIO EP9.

That car’s 6:45.9 is a blisteringly fast (and whole) lap. It’s also true that no electric car ever recorded has done a faster lap of the track. Is it the fastest production road car lap ever? No.

It was just the driver, Peter Dumbreck, who said it. Although the official video does include the old record (incorrectly) at the end.

But the NIO EP9 isn’t a production car at all. The company has made six of them, and all six have gone to the company directors and key investors as promotional vehicles. NIO will make ten more for customers, according to a release timed to coincide with this record attempt.

For that matter, it’s not a road car either. As far as we’re aware, it’s not homologated for road use anywhere in the world. NIO’s own press release refers to it as a track car. Even if it were road legal, the “record” run appears to have been performed on slick tires… 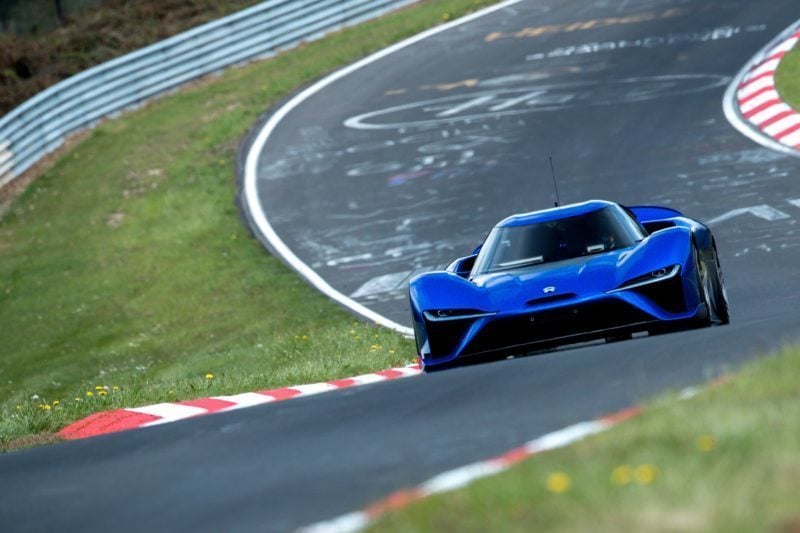 So Who Holds The Record Anyway?

The record that the NIO beat still stands then? Well, no.

What about that 6:52 set by the Lamborghini in March? It at least used road-legal semi-slick tires, but it’s a development car and not the production model. That aside, there’s allegations of video tampering hanging over the footage Lamborghini produced.

What’s next on the list? The Radical SR8 LM. 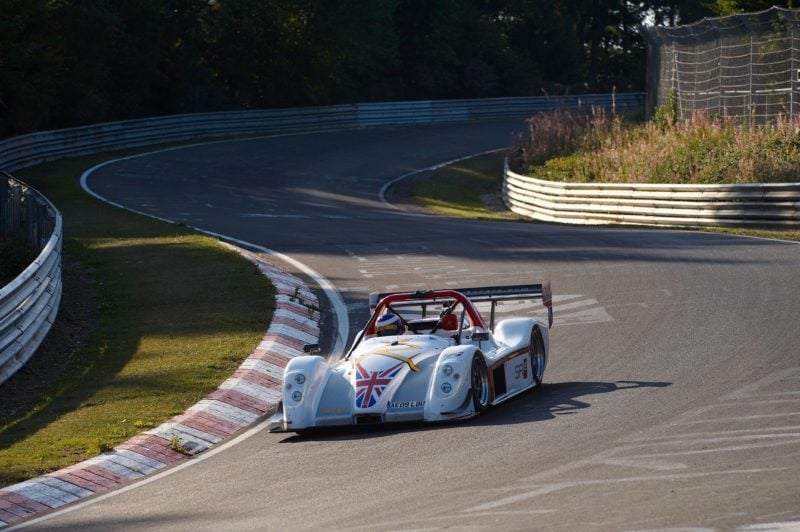 You may not have heard of Radical and your first thought on seeing this may be “That’s a racing car”. You’d be half right at least.

Radical does make racing cars, but it also registers them for road use. That’s right, you can buy this car and drive it on the road legally.

When Radical hit a 6:55 lap in 2013, it did so in a car that drove on public roads from the factory to the ‘Ring. It broke under seven minutes on an open tourist day and then drove back home again. On one set of tires. Radical tells us the rubber lasted for another couple of track days after that too. If you’d phoned up and placed an order, Radical would have delivered you a road legal SR8 LM of the same specification in 10 weeks.

While a lot of people aren’t happy crediting the Radical as a production car, the company still sells the SR8. It’s likely that there are tenfold more SR8s than P1 LMs, Zonda Rs and NIO EP9s put together. 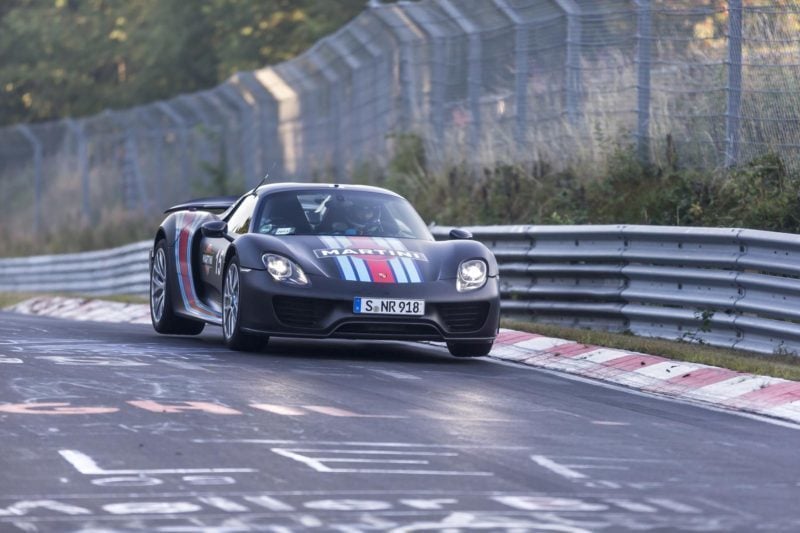 Surely There’s One Normal Car Though?

If your car has to have a windscreen to qualify as “production”, that leaves the Porsche 918 Spyder. This $850,000 hybrid supercar meets all the criteria, and a 6:57 lap time is certainly fast. Even this was limited to 918 units, but that’s surely enough for a “production” tag, isn’t it?

Except it’s not quite as fast as the McLaren P1, perhaps. This is where things get weird, as McLaren won’t tell anyone what the P1’s lap time actually was. Various outlets reported 6:47 and even 6:33 laps (which are unlikely, given the P1LM’s time), but McLaren won’t reveal a lap time. Ever.

Even the sub-categories have questionable records. The Honda Civic Type R is clearly a production car and road legal, right? Well… no.

The car Honda used for that run was also a development mule, albeit one Honda claims is “technically representative” of the finished product. Quick clue: it’s not even on sale yet.

Moreover the car had a rollcage and sticky track tires you might not find on the car you will eventually buy. Oh, and Honda removed the back seats and stereo to offset the added weight of the cage.

The car that Honda beat was the Volkswagen Golf GTI Clubsport S, which really does have no rear seats and wears grippy boots in production specification. Although Volkswagen created a specific ‘Nürburgring’ set-up for the suspension, you can actually select this in the finished car. In fact, we’ve driven it and it’s brilliant. But with only 400 of these cars made, limited by design, some might argue it’s not a production car at all. 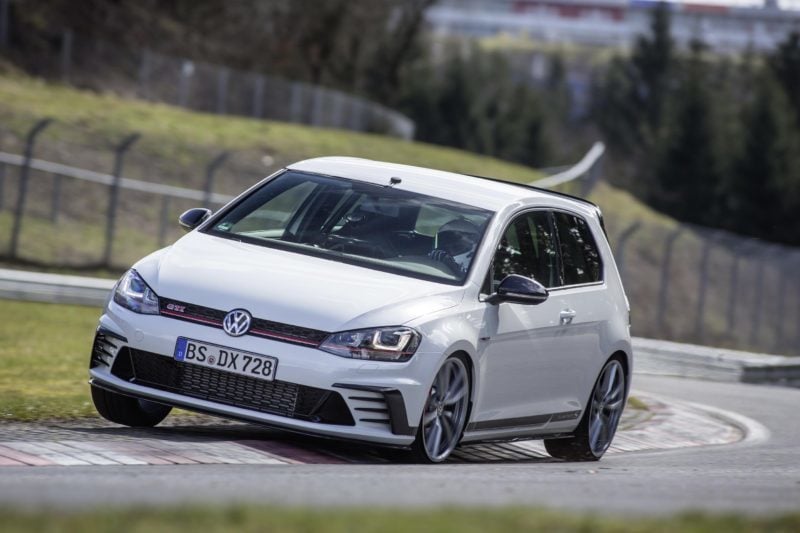 What’s The Official Record Then?

But whatever special treatment given to a car, none will never beat a Nürburgring lap record, because there isn’t one to beat. Outside of the race events that take place on the ‘Ring, there is no official timing body for the track.

This may come as a surprise, but the Nordschleife isn’t really a race track at all. Although created as one, for the purposes of becoming a safe home for the Eifelrennen rally, the public could use it too. The road links several villages in the mountains and there are roads off and on that locals routinely use.

What’s more, it’s subject to German road traffic laws and there are occasional speed limits. Around the Ex-Mühle entrance, limits of 80km/h (50mph) apply on tourist days because of local traffic. It’s for this reason that those who make the pilgrimage to the ‘Ring aren’t allowed to time themselves.

Lap times are thus limited to “Industriefahrten” — manufacturer and media test days — and, as we’ve seen from the questions about Lamborghini, they time themselves. Any records are thus always unofficial. 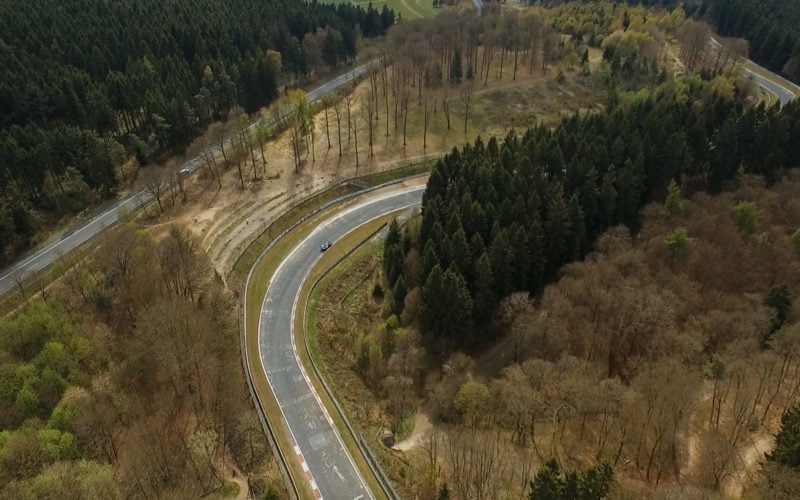 So Where Did The Obsession Come From?

The first non-racing lap times came from German motoring magazine sport auto. The Stuttgart-based monthly decided that the Nordschleife would make an excellent place to put cars through their paces. In 1995 it created a trophy for the fastest lap time driven by a road legal and German registered car, which it adjudicated.

Following the first award, to a Gemballa-tuned Porsche 911, Nissan opted to prove how fast its new production Skyline GT-R was by comparison. It had in fact already taken the old car there in 1989, setting an 8:22 lap. The Skyline’s new 7:59 time was seven seconds slower than the Gemballa despite having half the horsepower. This lap opened industry eyes to a new performance benchmark.

The sport auto trophy was soon followed by the Supertest. Editor Horst von Saurma would drive full production cars for comparative lap times, creating an impartial yardstick. Manufacturers were keen to compete, honing their own cars for the challenge. However, without sport auto’s oversight, the times cannot be compared. 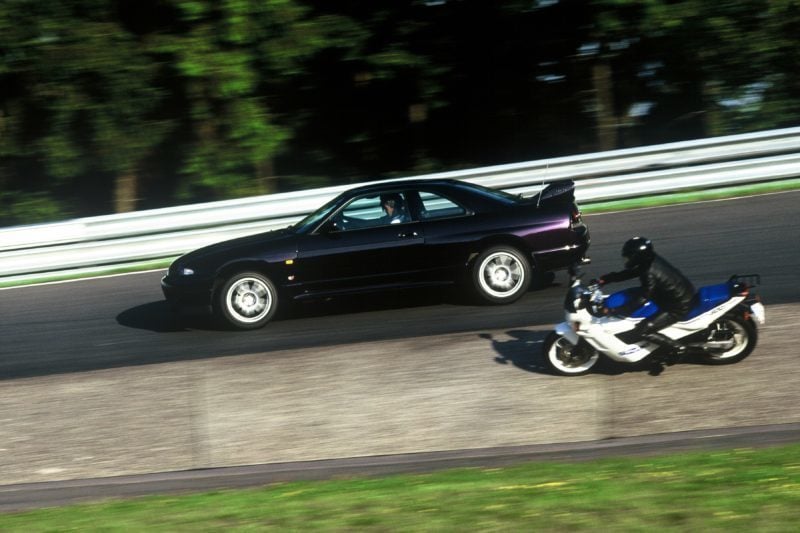 What’s The Point Then?

We’re not sure. Consumers are fed these lines about ‘Ring records, but as far as we can tell they’re irrelevant. Even if someone actually makes the car, they’re modified beyond production specification. Let’s be fair, a roll cage makes sense for driver safety and removing some weight to compensate is reasonable. If the car is sold like that — like the 911 GT3 RS or Megane 265 — great, but most are not.

People who buy the end product have cars that aren’t theirs, setting times they may not have set, for a marketing exercise that has little meaning. Not to mention the danger of them buying into the hype, taking their car to a Touristfahrten because it’s built for it and leaving on a flatbed. Or ambulance.

As we said at the start, a car that’s fast at the ‘Ring is fast on most fun roads. Honing the car there is a good step. But pursuing a lap time which has scant relation to the production model, just for a number in a press release, does not seem wise.

The ‘Ring is an incredible place. Its relentless corners, strange road surface transitions and tiny margin for error tests car and driver like no other road or track in the world. It’s also a dangerous place, claiming the lives of many drivers, amateur and professional, over the years. Perhaps it’s time we all found another performance metric.