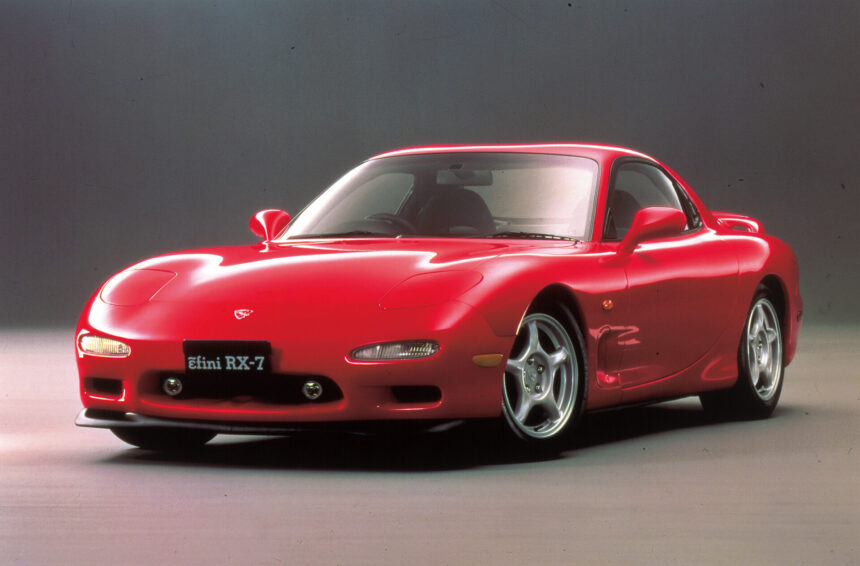 The company started out life as a producer of cork. Based in Hiroshima, which it still calls home today, the Toyo Cork Kogyo Company first came into being on January 30, 1920. Over the next decade, the company slowly transitioned to the manufacture of machine tools and, under the ownership of Jujiro Matsuda, became a vehicle manufacturer.

That first vehicle, the Mazda-Go, was a three wheeled truck. The Mazda-Go, named in part as reference to Matsuda-san but also the Zoroastrian creator deity Ahura Mazda, was effectively a motorized rickshaw — the first of its kind — with a one-cylinder, 9hp engine. Although developed continuously, the Mazda-Go was the company’s only vehicle for almost 30 years.

After manufacturing armaments during World War 2, Toyo Kyogo returned to vehicle manufacture mere months after the city was razed by the first nuclear weapon used in warfare. It continued to build commercial vehicles, with the K360 and T-Series line of three-wheeled trucks, before moving into passenger cars in 1960.

Unlike the vehicles that came before it, the Mazda R360 was a four-wheeled car. Part of the Keijidosha class of compact vehicles — also known as Kei Cars — the R360 used a 356cc, V-twin engine mounted in the back. The P360, or Mazda Carol, followed in 1962 to provide Mazda’s first four-seat car.

One of the most enduring parts of Mazda sprung out of this era too. The brand formed a partnership with Germany’s NSU, to develop and produce the Wankel rotary engine. Mazda launched its first rotary car in 1967, with the Mazda Cosmo Sport 110S.

Soon, Mazda started to put a rotary engine into anything it could, producing almost two million rotary-engined vehicles over the next 40 years. That included a pick-up truck, the Parkway coach, and a front-wheel drive coupe called Luce — the only front-drive rotary car ever made.

However its most famous application is probably the RX-line of sports cars and the firm’s endurance race cars. The RX models — supposedly an abbreviation for Rotary Experimental — started with the RX-2 version of the Capella, but hit its stride with the RX-7 in 1978. Designed by Matasaburo Maeda, whose son Ikuo is now lead designer at Mazda, the RX-7 would last three generations and 24 years.

During that period, Mazda officially changed its name to the Mazda Motor Corporation, in 1984, and took the rotary engine racing. In 1991 it notably became the first Japanese — or indeed Asian — manufacturer to win the 24 Hours of Le Mans, and still the only brand ever to win the race with a non-piston engine.

Maybe the brand’s most famous product arrived in 1989, with the Mazda MX-5 — also known as the Eunos Roadster, or Mazda Miata. The two-seat convertible has been in production ever since, across four generations, and with more than a million cars sold it’s one of the most popular sports cars ever made.

The car came along in an unusual period for Mazda as, like so many other Japanese brands like Nissan/Infiniti, Honda/Acura and Toyota/Lexus, it was experimenting with sub-brands. Of the four separate marques it created, Eunos and Efini are perhaps the best-known for their MX-5 and RX-7 products. Mazda also produced cars under the AutoZam brand for smaller vehicles, while a luxury brand known as Amati was cancelled at the last minute.

Its fascination with odd engine technology continued too. Alongside the rotary RX-7, Mazda produced the smallest capacity V6 on a global production car with the MX-3’s 1.8-liter V6 — Mitsubishi’s 1.6 was smaller, but restricted to Japanese market Lancers — which also found home, increased to 2.5 liters, in the Ford Probe. Mazda was also the first company to bring a Miller Cycle engine to market, in the Xedos 9/Millennia/Eunos 800.

The modern Mazda brand continues in that path. Since becoming independent again after a 35-year partnership with Ford, Mazda has introduced an entire range of vehicles on its own SkyActiv platforms. That started with the CX-5 SUV, but has since covered every model line Mazda makes.

While other brands downsized their engines and added turbos in pursuit of on-paper fuel economy and emissions, Mazda stuck to the principle of ‘right-sizing’ for real-world fuel economy. It’s also been surprisingly resistant to electrification, on the basis that there was still work to do on combustion engines.

Mazda’s first electrified cars are only starting to come to market now, and the fully electric MX-30 will arrive in the next few months. For 2020, Mazda has also introduced further unusual engine technology, with the first ever spark-controlled compression engine known as SkyActiv-X, in the Mazda 3 hatchback.

Speaking at a special centenary event at the company’s headquarters in Hiroshima, Mazda President and CEO Akira Marumoto said:

“As we look ahead to the next 100 years, we will continue to challenge ourselves to create unique products, technologies and experiences that our customers love.”

Automotive News 50 May 28 by Andrew Evans
Nissan has released a new video detailing its refreshed product line-up for the near future, and there’s a surprising treat in there for sports car fans: its next Z Car.…