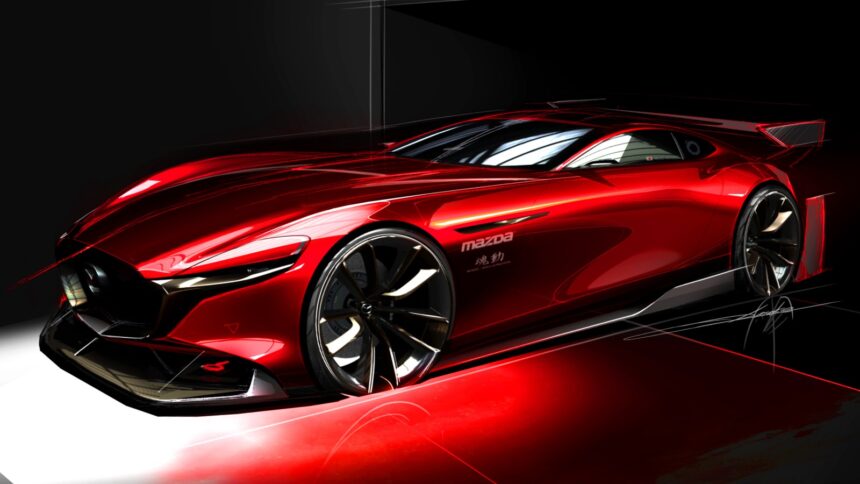 Mazda has revealed the first details of its new RX-Vision GT3 Concept, which GT Sport players will be able to use in the 2020 FIA-Certified Online Championships.

The RX-Vision GT3 takes the basis of the award-winning RX-Vision concept, which Mazda revealed at the 2015 Tokyo Motor Show. Mazda’s head of global design, Ikuo Maeda, is the man behind both cars — and in fact his father Matasaburo Maeda designed the original Mazda RX-7. The brand is still planning a production version of the car, which may arrive in time for its centenary next year.

To create the GT3 version of the car, Maeda has added some motorsport cues to the original. Although likely to be toned down somewhat in the final design, that includes large extensions at the rear for a new rear wing and diffuser, along with a large and low front splitter.

Speaking at the presentation, Kazunori Yamauchi commented that Polyphony Digital was in the process of creating the game model of the car right now. In response to questions from the floor, the Gran Turismo creator noted that neither PD nor Mazda had yet confirmed whether the car would use a rotary engine. Maeda’s original concept car however used a next-generation SkyActiv-R rotary unit, and the RX name itself is shorthand for ‘rotary experimental’.

Julien Montousse, senior director of design at Mazda North America, noted that the RX-Vision GT3 would sport an ideal 48:52 weight distribution, with a front-mid-mounted engine — whatever its eventual configuration.

Montousse also recalled Mazda’s first collaboration with Gran Turismo, with the LM55 Vision GT. This car even made its way up onto the top of the Goodwood Festival of Speed Central Feature, alongside the iconic, Le Mans-winning 787B, which is highly unusual for any concept car, much less a fictional one.

Although not announced at the presentation, the partnership with Mazda stands to reach further than just a single race car concept. Other Mazda models may arrive down the line too, and we’ll bring you more information as we get it.

Gran Turismo Sport 332 May 25 by Andrew Evans
It’s another new week, and that means a new set of three GT Sport Daily Races. There’s a little something familiar for players this week, but also something a lot…