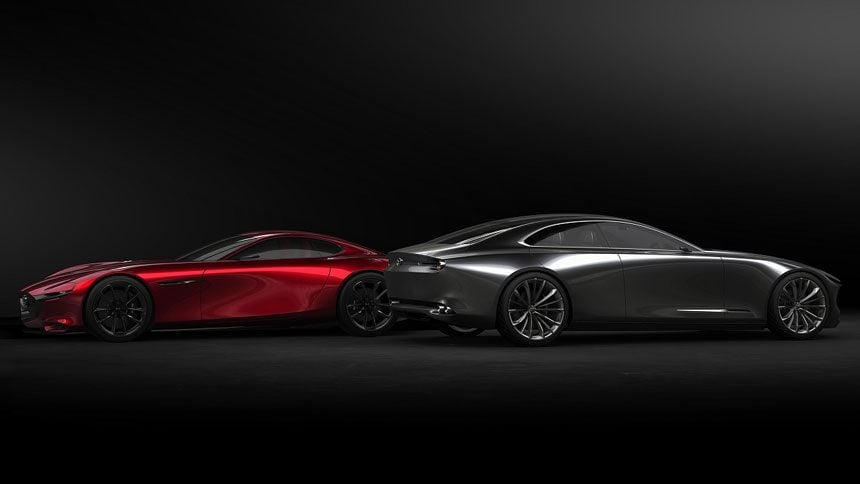 Mazda took the wraps off two concept cars at the Tokyo Motor Show 2017. The Kai Concept and Vision Coupe both hit the show’s floor and won us over with some staggering beauty.

The Kodo design language that the current crop of Mazda cars and SUV’s use is stunning in its own right. It manages to take a relatively inexpensive car like the Mazda3 and make it look more expensive than it actually is. Everyone from automotive journalists to the average consumer praises the vehicles for their looks — and it’s hard for us to argue with that.

With the Kai Concept and Vision Coupe, we get a look at the next evolution of the Kodo design language. With the large grille and skinny headlights, both cars keep the modern Mazda look. However, the rest of the design gets sleeker lines and an overall more futuristic feel without going overboard.

Besides the design, both concepts also feature an amazing new engine technology from Mazda. The existing SKYACTIV-G engines are already standouts for their dedication to the naturally-aspirated cause. The SKYACTIV-X, which these concepts use, sets the bar higher.

This is how Mazda describes its unique engine:

“The SKYACTIV-X controls the distribution of the air-fuel mixture in order to enable lean burn using the SPCCI mechanism. First, a lean air-fuel mixture for compression ignition is distributed throughout the combustion chamber. Next, precision fuel injection and swirl is used to create a zone of richer air-fuel mixture—rich enough to be ignited with a spark and to minimize nitrous oxide production—around the spark plug. Using these techniques, SPCCI ensures stable combustion.”

In short, it’s a gasoline engine that works similar to a diesel engine. It also doesn’t require a spark when the engine is under a certain load. It’s the first of its kind and pretty amazing, especially when so many manufacturers are banking on hybrid or electric power.

Mazda claims this new system gets up to 30% better fuel economy over a traditional engine. That’s a staggering improvement. To put it in perspective, the current Mazda3 gets 37 mpg with the SKYACTIV-G. Once fitted with a SKYACTIV-X, the new generation of Mazda3 could see over 48 mpg. That’s nearly as good as the Toyota Prius.

Mazda expects to fit the SKYACTIV-X to its cars for the 2020 model year. The new design language won’t be far behind that either.

Consider us sold if the production version of these cars looks nearly as good as the concepts. Now couple that with impressive fuel economy and the superb handling Mazda cars come with and its new models will be a winner.

We are definitely looking forward to the future of Mazda cars!