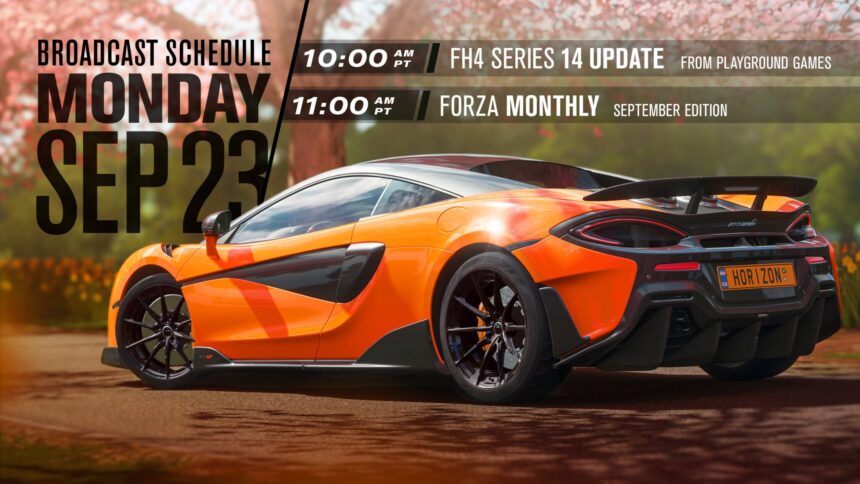 Playground Games has teased the latest addition to Forza Horizon 4. Just in time for the game’s first anniversary, Series 14 will arrive with at least one new car: the McLaren 600LT.

The LT has consistently been one of the community’s most-requested cars. Its confirmation came straight from the official Forza Twitter account, which announced today’s live stream schedule. Players should expect it to headline the Series 14 content, though traditionally that’s meant a handful of cars, not just one.

The 600LT is the newest, smallest member of Woking’s Long Tail series. Based off the “Sports Series”, it produces 592hp (600ps, hence the name) from its familiar 3.8-liter turbo V8. The LT benefits from a more aggressive bodykit versus the regular 570S, complete with a deeper front spoiler, bigger rear wing, and extra vents above the front wheels. Who can forget that tasty top-exit exhaust setup, too?

McLarens have featured prominently in Horizon 4, with the Senna hypercar getting cover star status at launch last year. Given the game’s UK setting, and the afore-mentioned first anniversary, the LT getting the spotlight for Series 14 makes lots of sense.

We’ll have more details in a matter of hours, as Playground’s live stream will start very soon. Players are encouraged to tune in and watch via Mixer, with promise of exclusive prizes for doing so. Stay tuned for all the details later today.

Forza Horizon 4 5 Oct 12 by Gary Slater
In an earlier livestream than normal, Playground Games has given us a sneak peek at the upcoming Series 28 update for Forza Horizon 4. The latest update is set to…