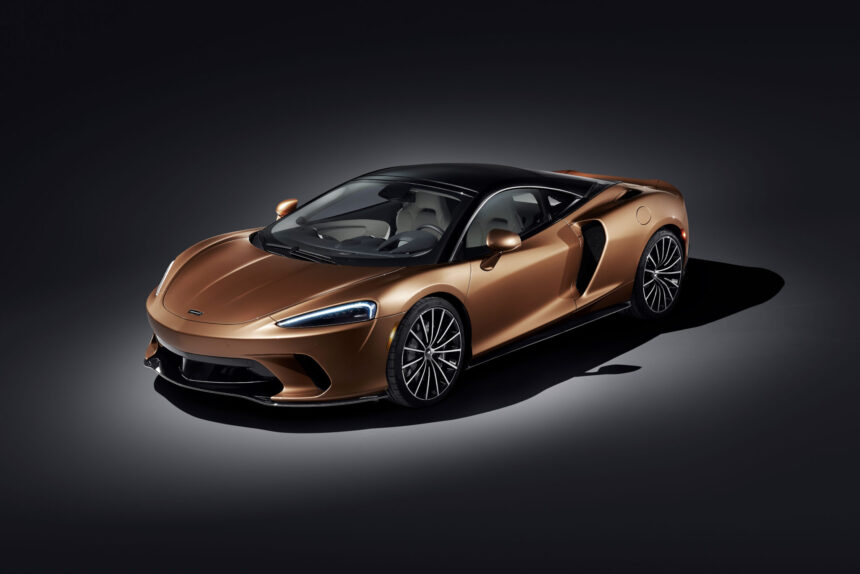 British supercar manufacturer McLaren has finally revealed its new grand tourer, along with its name.

The car that the brand considers its first true GT car is simply called “McLaren GT”. It sits outside McLaren’s existing model structure of Sports, Super, and Ultimate, so it seems rather appropriate that its name is also not entirely in keeping with model norms either.

Nonetheless, there’s some very familiar aspects to the McLaren GT. Just like every one of its siblings, the car uses the carbon-fiber “MonoCell” structure, which McLaren will soon start to make itself in a new factory in the UK. Like most McLarens, there’s aluminum body panels too.

There’s also the traditional twin-turbo V8. This is a four-liter version like that you’ll find in the Senna and 720S, but a little less potent. McLaren has opted for a modest 612hp for the GT, hinting at both the performance required for a McLaren and a more relaxed GT drive.

However, there’s more than a few differences too. That MonoCell is actually a custom version for this car, which McLaren calls MonoCell II-T. The “T” denotes a “touring” specification that includes a rear upper structure unique to this monocoque that creates a new luggage area.

McLaren has also been able to reduce the height of the engine by reworking the intake and exhaust systems, and this means that, in addition to the 5.3 cubic feet (150 liters) front trunk, the new rear trunk is actually pretty impressive. Coming in at 14.8 cubic feet (420 liters), it’s larger than most C-segment family cars, and long enough to store golf clubs and skis.

That all sits under a fully-glazed tailgate, with soft close function and optional electric opening and closing. With the glass C-pillars and rear-quarter windows, visibility is improved over regular McLarens too.

Unique, softer engine mounts reduce vibrations in the cabin, while the usual vehicle lift function gives the GT up to 5.1 inches of ground clearance for dealing with “aggressive” traffic-calming measures.

Of course you still get into the GT by those characteristic “dihedral” doors. Once inside, there’s a suitably comfort-focused interior. McLaren has raised the seating position slightly — which is definitely an aid to comfort compared to its other models — and specifically engineered both seats to stave off long-distance seat fatigue.

There’s standard Nappa leather trim, with optional softgrain leather, Alcantara or — in a production car first — cashmere. You can specify a partly armored fabric trim for the rear luggage bay, to prevent damage.

McLaren has addressed what has been its weakest spot, with a new infotainment system that it says is its most sophisticated to date. There’s standard navigation, Bluetooth, DAB radio (with Sirius satellite radio in the USA) and media streaming. That pairs to a 12.3-inch TFT screen in the instrument binnacle.

As for performance, it’s still a McLaren. Despite a significant increase in size — the GT is 184.4 inches (4.68m) long — the lightweight construction gives the GT a curb weight of 3,384lb (1,535kg), which McLaren says is more than 285lb lighter than any other potential rival.

“The new McLaren GT combines competition levels of performance with continent-crossing capability, wrapped in a beautiful body and true to McLaren’s ethos of designing superlight cars with a clear weight advantage over rivals. Designed for distance, it provides the comfort and space expected of a Grand Tourer, but with a level of agility never experienced before in this segment. In short, this is a car that redefines the notion of a Grand Tourer in a way that only a McLaren could.”

McLarenMcLaren GT
59 Comments Discuss this post in our forums...
GT Sport Circuits Quiz: Can You Spot the DLC Track From These Detail Shots?