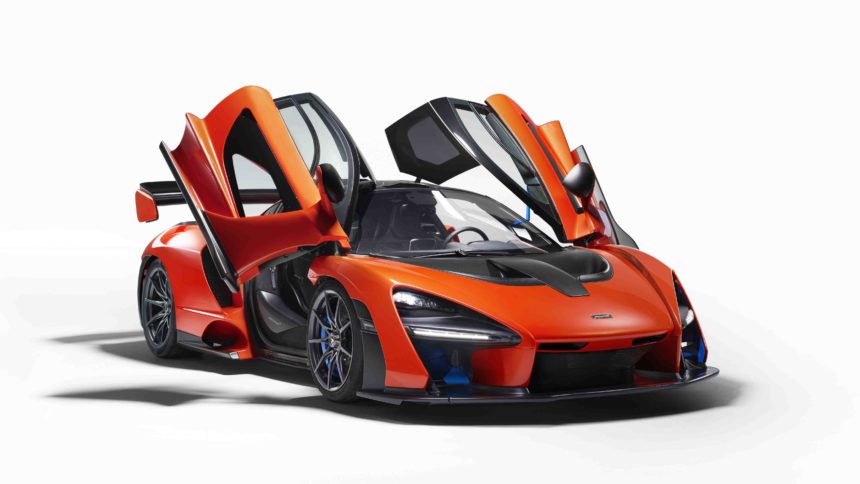 British high performance car manufacturer McLaren has revealed a new supercar benchmark, with a car it calls the McLaren Senna.

The Senna is part of McLaren’s “Ultimate Series”. This is McLaren’s category for extreme, performance-oriented vehicles with a mere passing nod to road use. To date, the company had only made one Ultimate Series car — the hybrid P1 — but the Senna and a forthcoming three-seat model will swell the stable to three.

It’s billed as the most powerful internal combustion model the brand has ever produced. Its four-liter, twin-turbo V8 kicks out 789hp, all to the rear wheels. McLaren combines that with a low dry weight, of 2,641lb. It builds the Senna around a carbon-fiber tub, with every body panel also made of carbon-fiber. 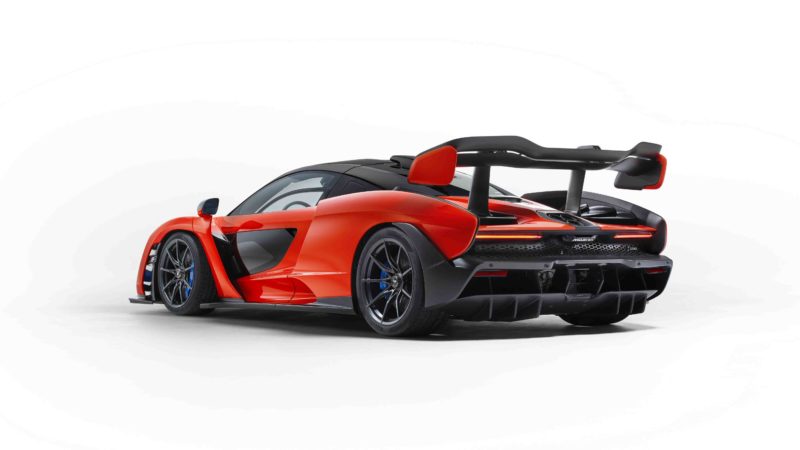 Picking the name of one of history’s most famous but divisive F1 drivers for a car is a controversial move, but on looks alone McLaren might carry it off. It’s a car built around aerodynamics.

Front and rear active aero balance the downforce available at every moment. This means that car’s design is such that there’s no continuous line on the vehicle that doesn’t end in a vent or an intake, to assist with channeling air around.

There’s a large double-diffuser — carbon-fiber, of course — and a two element rear wing measuring over seven square feet. This constantly adjusts to ensure optimal downforce, and also acts as an airbrake.

Every part of the rear end has cooling and aero efficiency in mind. The car creates a low pressure area to draw hot air out of the engine bay, ducted away from the rear wing. Thin LED tail lights do as little as possible to get in the way of air flow. 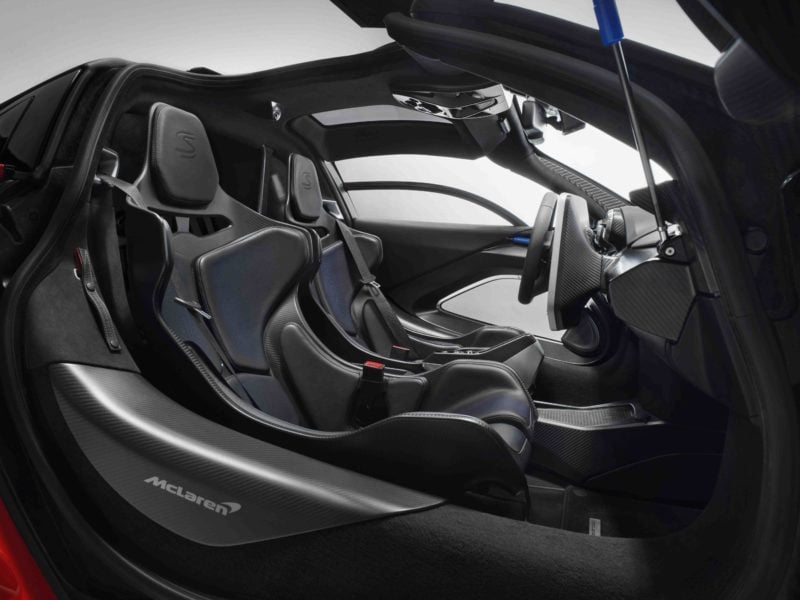 As you’d expect, there’s virtually no clutter in the cockpit. All information is available via the folding driver display (as with the 720S) and central screen. Even the steering wheel is absent of switches.

It reflects the stripped-out nature of the Senna. There’s barely any interior trim to speak of. Although customers can specify leather or alcantara for the seats, dash fascia and side airbags, that’s the limit of trim available. Another option is to specify the carbon-fiber doors with glass inserts instead of carbon-fiber panels — just in case you need other road users to see your choice of trousers.

McLaren even leaves the gas struts for the doors exposed, and much of the car’s interior is naked carbon-fiber. There’s no storage space either, with only an area behind the seats big enough for two helmets. It’s not a car for a weekend away. 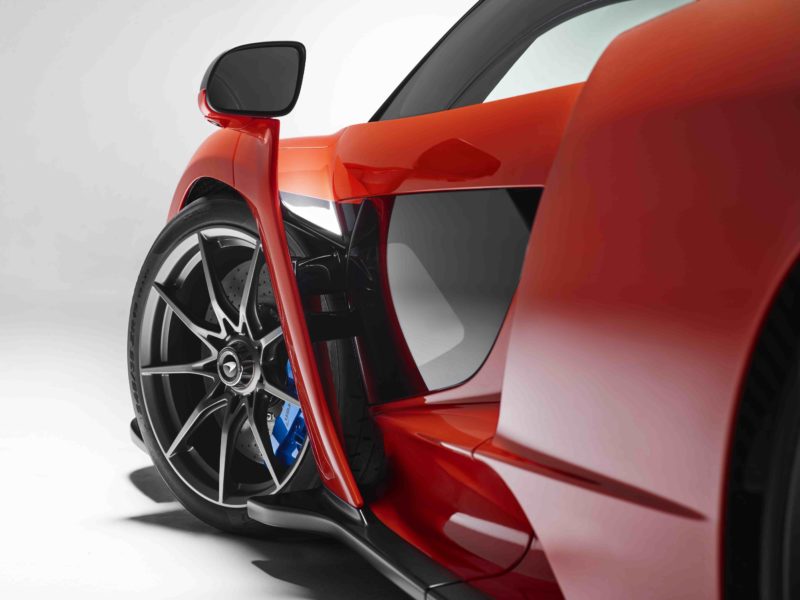 It’s all part of the goal of keeping the car’s weight low, so that the V8 can do what it was meant to do. This 789hp unit is closely related to the engine in the McLaren 720S, an engine widely held to be far more powerful than suggested. This “M840TR” version uses dry sumping and lightweight components to reduce mass and friction. The low inertia, twin-scroll turbochargers use electronically controlled wastegates, all in the name of pinpoint throttle response.

The engine’s power heads to the rear wheels through a dual-clutch, seven-speed gearbox. This has a fully automatic mode, but the driver also has the choice of operating it via a pair of large, carbon-fiber paddles.

So how quick is it? McLaren hasn’t released any figures yet, but with more power and far less weight than the 720S, expect that car’s 2.9 second 0-60mph sprint to be a dot in the rear-view mirror. The Senna isn’t focused on top speed, but we’re sure that it will surpass the same car’s 211mph limit — despite the rear wing. 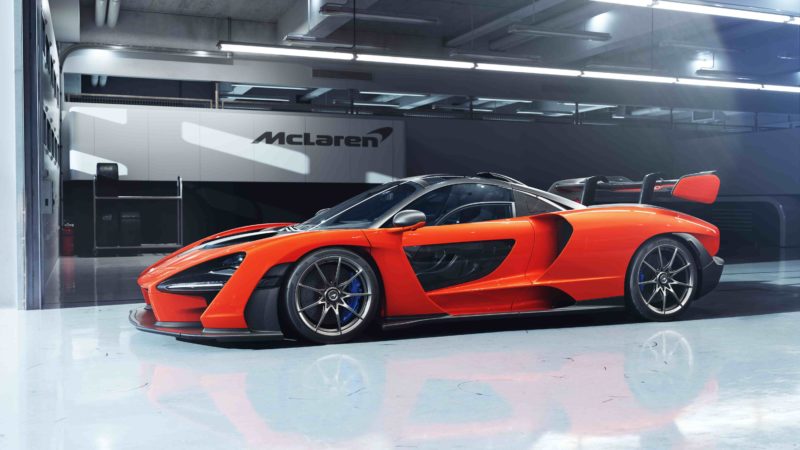 Instead, the Senna’s bias is towards track use. It uses a double-wishbone suspension system McLaren calls “RaceActive Chassis Control II”. It’s a development of the system used in the P1, with hydraulically interconnected dampers and hydraulic anti-roll bars. The dampers connect left to right and front to rear with two valves each, for bound and rebound. A kinetic roll system controls the car’s stiffness.

The standard active dynamics panel, as you’ll see in all McLarens, controls comfort, sport and track modes. The Senna also features a roof-mounted switch for race mode. This gives the car an even lower ride height and significantly stiffer suspension.

Naturally the braking system is based around carbon ceramic discs. The Senna only has one style of wheel available, which is lightweight and uses a center lock system. The tires are Pirelli road-legal track rubber: P Zero Trofeo R. 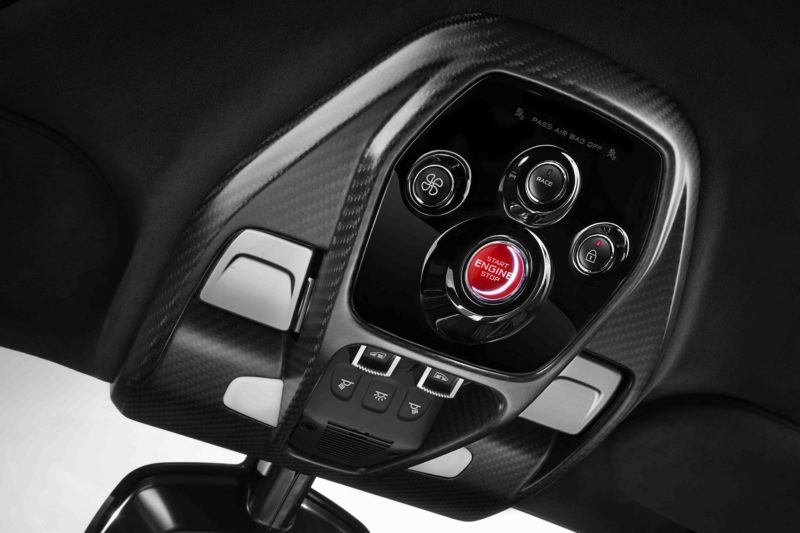 Production is due to start at McLaren’s factory in Woking in the third quarter of 2018. This will follow on from a full reveal in March at the Geneva Motor Show. McLaren will only build 500 examples, with each priced at £750,000 before options. However, if you’re keen to get your order in you’re already too late; all 500 are already accounted for.

McLarenMcLaren Senna
208 Comments Discuss this post in our forums...
Test Your Badge Knowledge With Our Car Logo Quiz