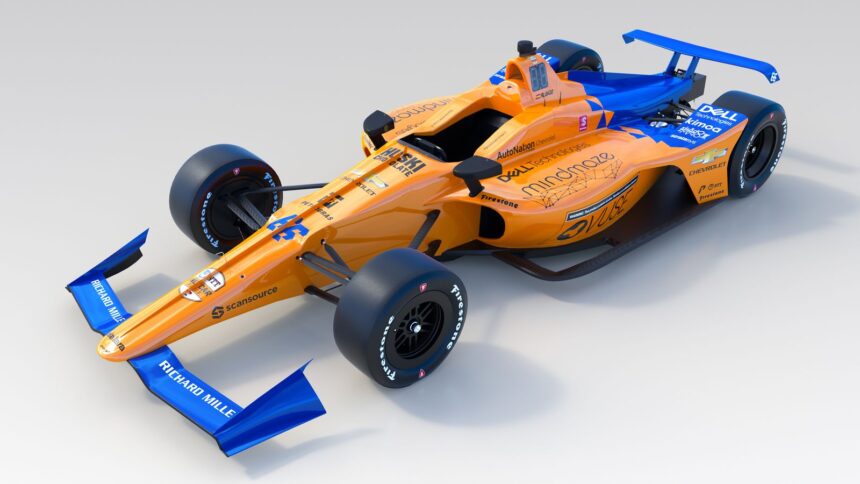 This May, the 103rd running of the Indianapolis 500 will see a familiar name back at the Brickyard.

McLaren will be returning to IndyCar, and make an attempt at “The Greatest Spectacle in Racing” with Fernando Alonso behind the wheel. The double F1 world champion previously attempted the Indy 500 with McLaren in 2017.

Alonso made a spectacular debut in the 500 mile race, leading overall on four occasions before his Honda engine failed. This year will be Alonso’s second attempt as he looks to complete motorsport’s Triple Crown.

The 2017 campaign was run in partnership with Andretti Autosport. For this year, McLaren will be running as its own team with Chevrolet power.

The Dallara IR-18 that Alonso will run was unveiled at McLaren’s Technology Centre in Woking. Sporting the same papaya orange as the F1 cars, the car also bears the number 66, honoring Mark Donohue’s 1972 Indy 500 victory.

“The reveal of the #66 car and livery is an important moment for McLaren Racing’s journey to the Indianapolis 500. It represents the beginning of the next phase of our programme, and reflects a tremendous amount of hard work by our specialist Indy 500 team at the McLaren Technology Centre.  We are all looking forward to seeing the #66 out on track for the first time on April 24.”

Alonso himself chimed in:

“I’m excited we are finally able to reveal to the world the #66 car which I’ll be racing with McLaren at the Indy 500 in May. The team at the McLaren factory has worked very hard to build this car ready for our return to the iconic Brickyard and I think it looks fantastic in the 2019 McLaren Racing colours. My hopes for the race remain the same, to win and achieve the Triple Crown, and I’m looking forward to meeting the fantastic US fans who made me feel so welcome first time around.”

The McLaren IndyCar will first be taking part in a closed test at Texas Motor Speedway on April 9. The team will head to Indianapolis to join the rest of the IndyCar field in the official speedway open test on April 24.

With some experience under his belt, Alonso will aim to do better than he did in 2017, hopefully without trouble. However, the unpredictable nature of the Indy 500 means anything can happen.

We’ll find out when preparations begin on May 14 ahead of the race on May 26.