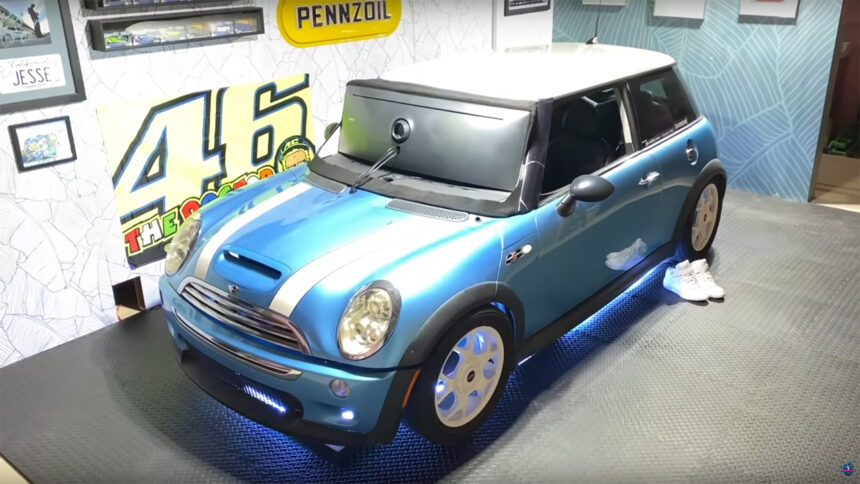 When racing games become a serious hobby there’s all manner of equipment you can buy to enhance your experience and ability. There’s fancy wheels and pedals, games-oriented displays, and driving rigs to which you can mount them all.

Ultimately though, you’re still sitting in a bunch of things designed for gaming and not for driving. What you really need is a car, and that’s just what YouTuber BasementGP — also known as Brent Cheney — decided for his basement man-cave.

Cheney, an artist and amateur race driver from South Jordan, Utah, came up with the idea to improve his iRacing experience. After scouring the local classifieds to find the perfect car, Cheney hit upon the idea of using a BMW 3 Series Convertible — for the access afforded by not having a roof — but ultimately ended up with a MINI Cooper S.

However, there was a minor stumbling block which we think you’ll have picked up from the word “basement”. There was no way to physically move the MINI from the street outside to the underground games room. Or at least not in one piece…

After selling a bunch of parts from the car — after all, it’s not like the car needs an engine — and making back the $1,000 he spent on it, Cheney had to cut the car into pieces. Using a reciprocating saw (without safety goggles; naughty) the gamer and some friends sliced the poor MINI into seven pieces.

There was some strategy to the savagery though. In order to reassemble the car in his basement and not look like the automotive equivalent of Frankenstein’s Monster, Cheney had to careful choose areas to cut that would not show, while still making the pieces small enough to fit through the narrow steps into his games room. The MINI’s design actually helped here, with windows covering external areas like the B- and C-pillars.

Once down in its new home, Cheney and friends stitched the car back together with a bunch of metal brackets. Although it’s unlikely to pass any roadworthiness tests or be much use in a collision, it’s strong enough to support the driver and to roll around or get lifted on a trolley jack if necessary.

Of course it still needs to be a sim-racing rig, so Cheney has kitted it out accordingly. A Fanatec DD1 base sits where the steering column usually would, with an F1 Clubsport wheel taking the place of the MINI’s standard item, and inverted V3 pedals down below.

Taking place of the engine, appropriately, is the i9-based Windows 10 PC, with a GeForce RTX 2080 graphics card, all inside a Thermaltake PC case under the hood. As for the windscreen, that’s now a Samsung CHG90 curved 90-inch screen — which actually appears to be almost exactly the same size as the MINI’s glass.

Naturally Cheney has featured the car in a few videos on his BasementGP YouTube channel, and you can watch one below:

Gaming RigMINI
18 Comments Discuss this post in our forums...
Test Your Badge Knowledge With Our Car Logo Quiz