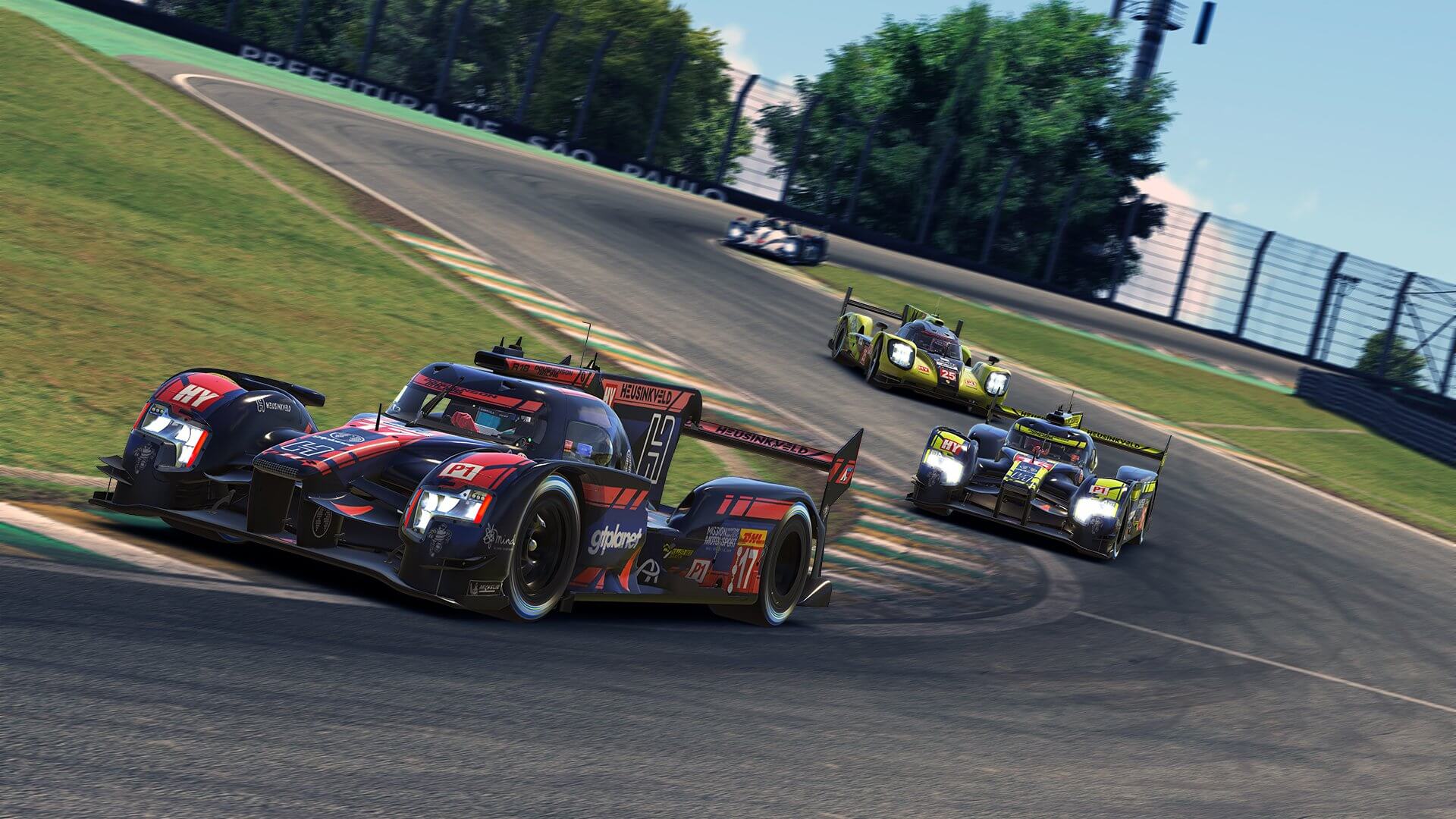 It’s been a while, but it’s time to wax lyrical about my favourite kind of racing once again: multiclass. Around three weeks ago, I was a part of a race that I’ll probably still be talking about in a few years time. It was an hour of the most intense, craziest, nose-to-tail action I’ve ever known.

This time, I was competing in the iRacing Le Mans Series. With the shorter one-hour distance tends to come more action, less patience and more crazy moments. There was certainly plenty of the latter in this one.

With the Pure Racing Team trio of Cornelis, Färber and Wolf, it was already a tough ask to get anything more than fourth out of this. After qualifying seventh, with Wolf back in ninth, the quality of the field was confirmed! Sharing the fourth row with me was none other than my iELMS teammate, Stephen Bailey.

“Green flag green flag,” came the call. Immediately, the intensity of this race was clear. I made a good start, with a bit of boost into turn four gaining me a place. The next few laps saw a little jostling for position, but it was calm until we hit traffic.

The first time through GT traffic very rarely passes without incident, especially when you have six cars nose to tail. Carlo Eusebi would be the first to fall by the wayside, as he tried an ambitious move on a GT car that really didn’t pay off.

Much to my surprise, Patrick Wolf still hadn’t been able to work his way through the pack at the pace I expected. He did, finally, make his move at the start of lap eight and I thought that would be it.

For the next lap and a half, we would pass and repass each other several times. Patrick did eventually make it stick, but the fact I’d been able to pass him twice in response was an amazing feeling.

That was far from the end of the action. A six-car train had formed once again, in what was now a battle for third place. With six cars all within three seconds, something had to give — and give it did. First up was Josh Lad making an error passing a P2 which allowed me to, quite literally, slide my way by.

Andra and Wolf would follow Lad’s error a couple of laps later, by touching in turn two. The result was Andra being pushed across Wolf’s nose, me being promoted to third and them being taken out of contention.

As if that wasn’t enough action, a battle was brewing with Lad. He was very quick in qualifying, but his pace through traffic was lacking. The traffic helped me to pull a small gap, but once in clear air, Josh closed in again. His pace was good enough to get him close enough to have a Danny Ric-style dive into turn one — one that rewarded him with third.

Despite being able to pass me, Lad couldn’t pull away, with traffic once again proving to be his Achilles’ heel. That allowed me to harry and force him into a risky move on an LMP2 into Junção. That error allowed me to just edge ahead going up the hill.

Out the corner of my eye, I caught Bailey making a dash for third. Up to that point, he’d been just lurking in the background, waiting for an opportunity. With Josh’s error slowing us down, Bailey saw his chance and deployed what was left of his hybrid. What followed was an insane 40 seconds of racing.

“You’re on the left, three wide!” Came out of the spotter’s mouth, as we went either side of some poor GTE driver. We went through the first three corners side by side. I saw a hint of Bailey’s nose through turn three and deployed a little extra hybrid to gain the place again. Then Lad, who had clearly saved some hybrid as me and Bailey scrapped, boosted by both of us to retake third on the next straight.

Bailey had another go at me into turn six but didn’t have the grip to hang on around the outside. He very nearly lost a place to Groenen, but yet again he hung his car around the outside to hold onto what became fifth.

Josh continued to be the cork in the bottle up until his pit stop. With the Audi having a smaller tank, it doesn’t require as much fuel, so as long as I could stay close, I would leapfrog him in the pits — and so it proved.

I and Bailey pitted just one lap later, with both of us coming out in front of Josh. In fact, he appeared to have lost more time than expected. With no sign of him, it was once again me against Bailey.

We’ve had some incredible races in recent times, both together and against each other, but none more intense than this. For the remaining ten minutes, we were ducking and diving, searching for the final blow.

Things became a little BTCC-like on lap 42, with us bumping into each other three times in five corners. Bailey eventually managed to make it stick, but as with Lad, he couldn’t break away and secure the final step on the podium.

The end of lap 45 proved to be pivotal.

Bailey, feeling the need to make a move and not get stuck, ambitiously tried to pass a GTE car around the outside of Mergulho, the penultimate corner. The GT couldn’t quite leave enough space, pushing Bailey into a massive slide, with the car even leaving the ground. Surely this was it? No. He somehow held it around the outside of the GTE to keep it side by side. We then split a terrified GTE car, making it three-wide yet again.

Out came the white flag. This was it, now or never.

As we crossed the line nose to tail, Bailey once again pulled out to try and pass around the outside of turn one. In a repeat of a similar moment early in the race, he edged ahead, but I used some hybrid boost to take it back.

We’d been so caught up in our crazy battle, we hadn’t noticed Groenen had closed right up. Groenen then boosted into Bailey’s door, pushing him out the way. That move effectively ended the battle, giving me the most hard-fought podium I’ve ever earned.

This sort of adrenaline rush is why we race. The ecstasy of this result after an hour of non-stop action is hard to put into words. It’s a race that will live long in the memory.

Michael Leary · Feb 15, 2019
Formula One and iRacing fans, rejoice! In a surprising turn of events, the iRacing Motorsport Simulation team has announced a partnership with the Mercedes-AMG Petronas F1 team to bring “multiple” cars to the PC racing sim in future builds.

Michael Leary · Feb 15, 2019· 3 Comments
The iRacing Motorsport Simulation team has given a taste of what’s to come in the 2021 Season 4 build of the PC racing sim. While there’s no formal announcement as of yet, the team has uploaded a number of “Season Spotlights” videos to the official iRacing YouTube channel.

Andrew Evans · Feb 15, 2019· 3 Comments
One of the world’s oldest remaining motorsport events, the Mount Washington Hillclimb, has a new digital lease of life, taking its place as the first point-to-point course in iRacing — at the same time as Travis Pastrana was breaking his own record at the event.

Andrew Evans · Feb 15, 2019· Comments
Like so many other championships, IndyCar has seen its calendar all but destroyed by coronavirus concerns. That includes the 2020 running of the famous Indianapolis 500 — one of three races in the Triple Crown of Motorsport — which is now due to take place in August rather than the traditional May date.

Andrew Evans · Feb 15, 2019· Comments
With the motorsports calendar in disarray this year, esports is experiencing a popularity surge. Viewers are tuning in to watch virtual sports in their hundreds of thousands on streaming platforms, and now it seems that traditional broadcast media is after some of that action too.

Michael Leary · Feb 15, 2019· Comments
Following up on the first build of 2020, the iRacing team has released the Season 2 build to all subscribers. Headlining the new season are two new additions: the Porsche 718 Cayman GT4 MR, and the Norwegian rallycross circuit Lankebanen.

Michael Leary · Feb 15, 2019· Comments
Last September, iRacing’s Steve Myers confirmed the Porsche 718 Cayman GT4 Clubsport would make its way to the PC racing sim. Now, we can set our sights on taking the GT4-class racing machine for a spin in March.