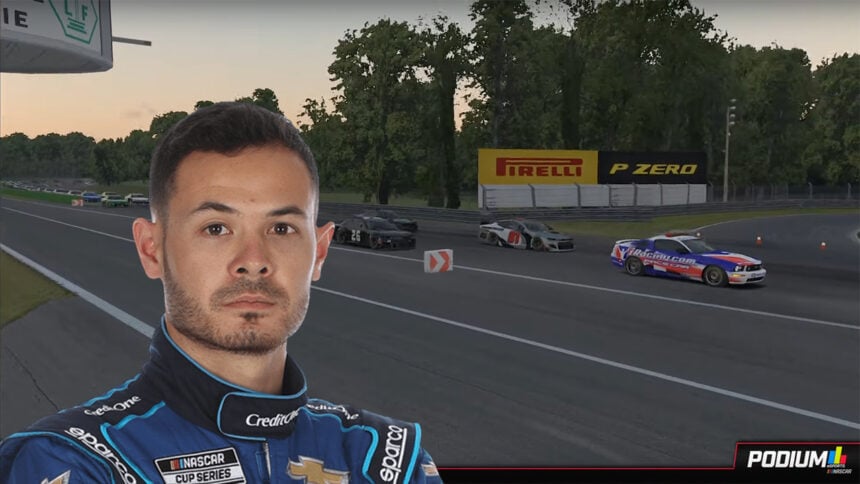 The virtual world hasn’t proven the best place for some racing drivers to ply their trade recently. Last weekend, NASCAR Cup Series driver Bubba Wallace lost a real world sponsor for his behavior on the digital track. This week it’s Kyle Larson, who’s one-upped Wallace by getting suspended by both his team and NASCAR itself.

Larson’s incident came during a one-off virtual race which took the NASCAR stock cars to Monza’s old oval layout — courtesy of the magic of sim-racing. Though not part of the official NASCAR digital series, the grid nonetheless boasted a whole host of big name drivers, many of whom were broadcasting their own Twitch streams.

During the race, the Chip Ganassi Racing driver was involved in a heavy crash on lap six. While recovering he was apparently experiencing audio issues communicating with his spotter. While trying to establish whether the spotter could hear him, Larson inadvertently spoke to the entire driver voice chat party — and the live stream on eNASCAR — and dropped a racist epithet:

The drivers, and general viewing public, were understandably shocked. One driver alerted Larson to the fact he was talking to everybody, while other responses varied from “yikes” to “oh damn”. Viewers watching Josef Newgarden’s stream saw the reigning champion visibly grimace.

Unsurprisingly NASCAR, iRacing, and Chip Ganassi Racing were not impressed. The team suspended Larson without pay, saying that “the words that he chose to use are offensive and unacceptable”, while iRacing suspended the driver from the service too. NASCAR followed this up earlier this afternoon by suspending the driver indefinitely, ordering him to attend sensitivity training, and issuing the following statement:

“NASCAR has made diversity and inclusion a priority and will not tolerate the type of language used by Kyle Larson during Sunday’s iRacing event. Our Member Conduct Guidelines are clear in this regard, and we will enforce these guidelines to maintain an inclusive environment for our entire industry and fan base.”

Larson, who graduated to NASCAR Cup Series through NASCAR’s Drive for Diversity program, has apologized on social media, though recognizes that the damage caused to his reputation may be irreparable.

Update: Larson’s sponsors, Credit One and McDonald’s, have now also terminated their contracts with the driver.

You can, for what it’s worth, watch the race in full below — without the offending term…

NASCAR
145 Comments Discuss this post in our forums...
Test Your Badge Knowledge With Our Car Logo Quiz