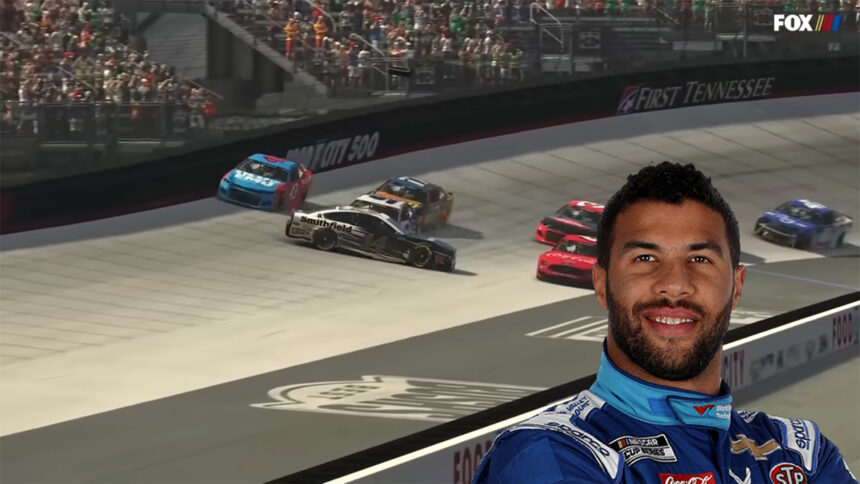 Up to 2015, Blue-Emu — an emu oil joint and muscle cream — sponsored the Richard Petty Motorsport (RPM) outfit. That deal had to end when Richard Petty signed a non-compete with Goody’s Powder, a powder-based pain-relief brand he’d been the face of since 1977.

Instead, Blue-Emu has taken to sponsoring the individual cars, primarily Darrell “Bubba” Wallace’s #43 Chevrolet Camaro. The brand is also the sponsor for the Blue-Emu Maximum Pain Relief 500, the 500-lap race of Martinsville Speedway in Ridgeway, Virginia.

With iRacing filling in the gaping chasm in the motorsports calendar right now, Blue-Emu carried that sponsorship through to the NASCAR Pro Invitational. Absent other events to show, the first race in the series was the most-watched sports broadcast in the USA across all of March, and the most-watched gaming event in US history.

Given the circumstances, the series has something of a more serious edge to it, and that’s something Wallace could have done with remembering. The RPM driver, through no fault of his own, tangled with “in-car” commentator Clint Bowyer of Stewart-Haas Racing on lap 11 of this weekend’s virtual Food City Showdown at Bristol Motor Speedway:

Though Bowyer came off second-best in the accident, Wallace was not impressed. Viewers of the RPM driver’s own stream — with prominent Blue-Emu branding — saw him park the car, exclaim “Y’all have a good one. That’s it. This is why I don’t take this **** serious. Peace out.” and quit.

That decision, with 92% of the race remaining, caught Blue-Emu’s eye. The company took to Twitter to let Wallace know it didn’t find rage-quitting in front of a million viewers acceptable, and it would terminate its sponsorship of the #43 driver — adding that it wants “drivers, not quitters”:

Wallace’s rage quit and comments about gaming come at odds with his own statements just last week. The 81-race driver, now in his fourth season, runs a Mario Kart 8 tournament for his crew and fans, and when speaking to NASCAR.com noted:

“It’s almost unhealthy how much we’re taking a game like Mario Kart into consideration of how to be better at. But hey, I’m a competitor. I want to win at everything. I don’t care if it’s Mario Kart, iRacing or real life. It’s a racing game I have a huge passion for.”

Given Blue-Emu’s multi-year contract with NASCAR, consisting of both the Virginia race entitlement and placement as official pain relief cream, spray, and patch of NASCAR, this incident is likely to rumble on once the cars return to action.

NASCAR
154 Comments Discuss this post in our forums...
Test Your Badge Knowledge With Our Car Logo Quiz

Project CARS 3 63 Mar 1 by Andrew Evans
The mystery fourth car in this week’s Project CARS 3 DLC pack has broken cover, and it’s not only making its debut in the Project CARS series but in gaming…

Gaming 36 Feb 26 by Andrew Evans
Milestone has revealed it’s developing a game based on that famous toy line from Mattel, Hot Wheels. The brands have worked together to create Hot Wheels Unleashed, which looks like…