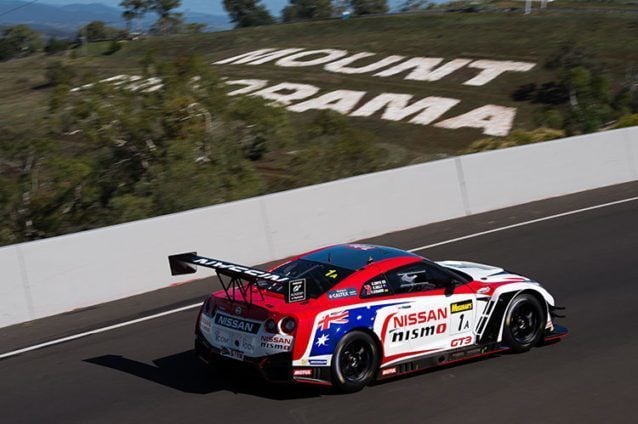 The racing season is continuing to heat up for Nismo. While last weekend’s tough Dubai 24H race saw the GT Academy team finish 8th in the SP3-GT4 class, the next event will up the pace for a once-around-the-clock run around Mount Panorama.

The venerable GT-R will again be competing for overall victory in the GT3 class. After last year’s McLaren victory dashed hopes of back-to-back wins for Nismo, the team is fighting back with a two-car assault for 2017.

Leading the charge in the #23 car will be Bathurst veterans Katsumasa Chiyo, Alex Buncombe, and Michael Caruso. Over in the #24 sister-car, 2016 Bathurst 12H drivers Florian Strauss and Todd Kelly will be paired with always-busy Jann Mardenborough.

Both Chiyo and Mardenborough shared the track last year as teammates in the All-Japan F3 Championship. For Chiyo, this will be his fourth appearance at the Liqui-Moly Bathurst 12 Hour, while it’ll be a career first for Mardenborough. The 2011 GT Academy champion is excited:

“Firstly, I’m honored to be chosen by NISMO and Nissan Australia to represent them in the Bathurst 12 Hour. It’s a race I’ve watch on television and played on PlayStation. I’m really excited to take part. Just playing the game, Sector 2 looks mega, so I can’t imagine what it will be like on the first lap and on qualifying tires. I‘m hugely excited to compete with drivers that have lots of experience at the track, and with some drivers that I know quite well, like Florian and Chiyo.”

With twice the cars on the track, the chances of a Nissan victory are higher than they’ve been before. Stay tuned to GTPlanet for more news on the race, which will get underway February 3.